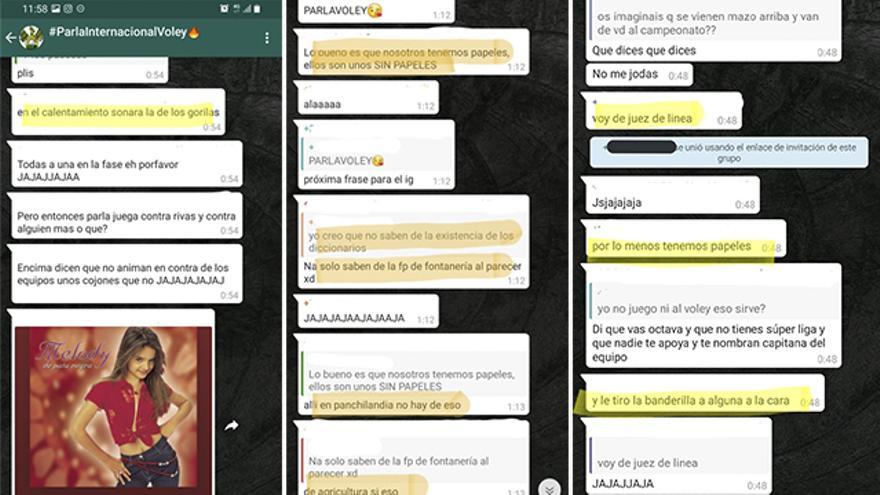 They are between 16 and 19 years old and next Saturday their club, Voley Parla, will host the final phase of the first female youth division of the Madrid league. A sports day that puts the finishing touch on one of the toughest seasons due to the pandemic but that, against all odds, has placed these girls, of nine different nationalities, on the target of racism.

“The good thing is that we have papers”, “in panchiland there is no such thing” or “in the warming up the gorillas will sound”, are some of the messages that have been shared in a WhatsApp group created with the intention of humiliating to the team and to the city The link to the group, which allowed access to it, had previously been disseminated on Twitter.

In the final phase of the league, which gives access to the Spanish volleyball championship, six teams participate: the top five in the classification and the organizer. The Club Voley Parla, which has been preparing the day for this Saturday for more than a month, has a direct pass despite having finished eighth in the table. It is nothing new, because the regulations have included this casuistry for several seasons, but the situation has generated discomfort among some Twitter users, apparently linked to other teams, which began with criticism of the regulation and ended up unleashing an avalanche of racist insults and classists against girls.

“I open a thread about the racism that the Parla Voley team received,” wrote a Twitter user this Monday to denounce the situation, attaching screenshots of messages from the WhatsApp group, called #ParlaInternacionalVoley, alluding to the nationalities of the young women. A complaint echoed by the councilor for sports of the municipality Javier Rodríguez, who in conversation with this writing has defended that “it has not been a single comment from a young man, but that it is organized and there are many comments”, so has assured that it is necessary to give “an answer to the height” because “this type of attitudes cannot be allowed at such an early age”.

“If this causes damage to a professional and totally takes you out of sport, imagine some girls of this age,” says Rodríguez, who has guaranteed the team “all the clothing of the City Council”, while the capacity restrictions for facing Saturday and the legal services of the consistory study the measures that can be put in place against these racist attitudes.

This medium has contacted the Madrid Volleyball Federation to find out if it will take any action in this regard, but they have declined to make any kind of statement.

From the Club Voley Parla, for their part, they prefer to stay out of the controversy so as not to add fuel to a fire that, inevitably, has affected the players and focus on the sports part. “What we want is to play our phase and not put more fire in this, which has come as a surprise,” they say. Because, as Rodríguez explains, the team “had not had a real problem” of racism until now. “It was not something usual,” he points out, “although there are places where it shocks them that Parla is in the first division and that we organize the final phase.”

Those in charge of the club point out, yes, that they have received “a lot of support from many clubs and many people.” Meanwhile, the girls try to continue focused on sport in a city where, from the city council, they see them as “an example of inclusion and interculturality ”.