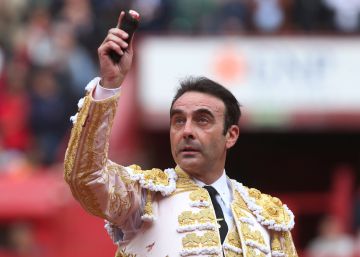 Ear for the Spanish Enrique Ponce and another for the Mexican Joselito Adame in the fifteenth run of the Great Season of the Plaza Mexico, where the Mexican also José Mauricio greeted the third in the fifth bull of the celebration.

Fernando de la Mora cattle were dealt with uneven presentation. Except first and sixth, noble and with transmission, the bulls were meek in general. The closure summoned more than 30,000 people in the city of Mexico City.

The already confirmed presence of Enrique Ponce, replacing the Peruvian Andrés Roca Rey, and Joselito Adame for the second Anniversary Run of the Plaza Mexico, on Wednesday, February 5, gives continuity to what happened in the celebration of this Monday.

Both killers brushed the big door and only the good judgment of the authority avoided it.

The judge did not maintain the level of demand all afternoon, since the ear of Joselito Adame, in the third bull, granted it after a non-existent task and among the pitos of much of the square that accompanied in the return to the ring To the Mexican bullfighter.

With which he opened the square, and despite a strong request from the second appendix, the box remained firm and did not grant the blow to Enrique Ponce.

An ear is a prize more than enough, because Ponce developed a work run over and detached from a bull with class and nobility, dyed at times of greed, but of little strength.

Such a lack of command was the task, that at times that of De la Mora, despite his absence of power, ran over the Valencian bullfighter, who had to correct his position so as not to be overwhelmed.

After shaving his work on the part of the public, Enrique Ponce cited the natural crusader with the crippled crutch and, while executing the purest batches that have been seen in Mexico in years, he shouted to the challenging fans “that’s right, that’s right” .

After these two brilliant crutch passages, especially the second, he redisplayed his circular bullfighting, including the “poncina”, dazzling the animal’s onslaught.

He killed a lunge and the request of the two ears was majority.

The Spanish played the big door in the afternoon, a meek man who showed emotion in all the sets, using a large stick of Juan José Palomares.

The varilarguero withstood the nervous onslaught of the bull coming from afar with fury.

Ponce was wrong to fight him at medium altitude and always want to temper when the bull, at all times, proved to have transmission by bass. He left empty for it.

Earlier Adame’s ear had arrived, by an ugly task getting closer without fighting a bull without forces, which anchored on the ground could only be an inert figure before Joselito’s constant demonstrations of courage.

The trophy was so exaggerated, that it weighed in the decision not to give him the second ear in which he closed the square.

Good job at the last of Adame. Two batches linked to deep passes, from the right, preceded a series of natives that began taking off, but that went around until leaving a round pass of enormous quality, tempering and command.

Only in the end lost the classicism thanks to which the bull class of Fernando de la Mora was seen. He killed an almost whole and disheveled. The decision not to facilitate the big door generated a protest of the laying.

José Mauricio made the stroll for the third time with all the lights on his person after his two big doors in a row this season in the Plaza Mexico. He had the worst lot in luck. The fifth soon developed meaning and caught Mauricio without consequences twice.

Successful call in the Plaza Mexico with a poster that will be spent almost tomorrow making the walk in this same hostel. Borja Ilián