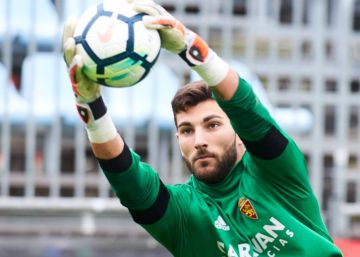 Real Zaragoza goalkeeper Álvaro López Ratón, known as Álvaro Ratón, will be tried for a crime of sexual assault “In competition with a crime of injury” occurred on the night of June 23, 2018 in the Orensano municipality of O Carballiño, where it is natural. According to the prosecution's indictment, the 26-year-old footballer assaulted a woman in the vicinity of a drinking facility after she refused to have sex with him. Before the rejection, the athlete "shook her and pushed her against a wall, hitting herself with a stone bench and with a clear libidinous mood, kissed her against her will, put her hand inside her panties and lowered her pants." As she continued to refuse, "he called her a slut and left the place." The leak of data that allowed to identify the victim caused her to suffer insults and hostility by some neighbors of this small town in which the player is very popular, according to sources in the woman's environment.

The prosecution asks for two years in prison for Raton, on provisional release, and to compensate the victim with 10,000 euros. It also claims that it is forbidden to approach for five years less than 500 meters from it, which lives in front of the defendant's parents. In addition to the aggression, the woman reported the leaks to the media. This complaint gave rise to a new procedure in which provisional dismissal has been issued. In this case, the order emphasizes that the facts investigated “are constitutive of a criminal offense” although, he states, “there are not sufficient grounds to attribute their perpetration to any specific person”.

During the 16 months that the instruction of the complaint for sexual assault has lasted, Álvaro López Ratón has searched the case and proclaimed his innocence in various media outlets, clothed at all times by the direction of Real Zaragoza, club of the Second division. The club defended the player publicly, stating that he had always trusted his word and expressing his conviction that the cause would be filed. It has not been like that. Despite the resources of the player's lawyers, both the investigating judge and the Prosecutor's Office have ordered the opening of the oral trial and that the precautionary measure of provisional freedom and prohibition of approach and communication with the victim agreed on July 2, 2018 be maintained. .

"They insulted her on the street"

The applicant, without social projection, became news against her will. The leak occurred despite the fact that she was listed as being harmed in the investigation opened by the Civil Guard, whose documentation expressly stated "Do not filter press".

His initials, his age and other personal characteristics that allowed him to be identified by the neighbors in a municipality of 13,000 inhabitants, began to spread in local and national media. “They insulted her on the street, pointed her out and that meant a new aggression for her; It was a real public derision, ”say sources in his environment to justify not wanting to make statements.

“If you have decided to go ahead with the complaint and deal with all this, it was not just for her, but also thinking of other women who cannot, who dare not do it out of fear.” “The psychological consequences of such a procedure long they are exhausting and many women do not go ahead with their complaints because it is the victim who has to prove again and again that he is innocent ”, the same sources maintain.

The hostility of a part of its neighbors to identify it as the complainant of the athlete, well known in the town, is evident, according to this environment, with the presence as a witness of the defense of his eye doctor, “who works in a clinic owned by a Mouse relative. ”

For his part, after giving a statement to the investigating judge at the beginning of July 2018, the defendant returned to Zaragoza, where he lives and from where he issued a press release in which he defended his innocence and asked for “respect” for him and for his family.

“It is not an easy day, it is probably one of the most complicated of my life, but I face it with total peace of mind knowing that the values ​​that my parents instilled in me, about the respect and education of people have helped me to overcome the different adversities that one faces throughout life, ”published the goalkeeper of Real Zaragoza on his social networks.

So far, López Ratón has maintained the version that he did not try to kiss the woman. He says that it was she who hinted at him asking to go to a hotel, to which he points out that he refused. Faced with this, the applicant stated in her judicial statement that when the athlete tried to attack her she shouted that if she wanted sex with someone she would go to a hotel, to which he replied that she could not do it because she was famous.

The forensic reports signed by doctors of the Imelga (Institute of Legal Medicine of Galicia) incorporated into the case detail that the injuries that the complainant presented at the time "are related to the described mechanism of injury". They also point out that as of January 28, 2019 (more than a year after the alleged aggression), the woman still needed psychological assistance. He still receives it now and insists on keeping silent.

Real Zaragoza continues to wrap his goalkeeper, who has had to deposit a bank guarantee for 24,201.43 euros in court, who last February renewed the contract until 2023.

The story of Alberto, the nurse who managed to beat suicide: “I wanted to stop suffering”