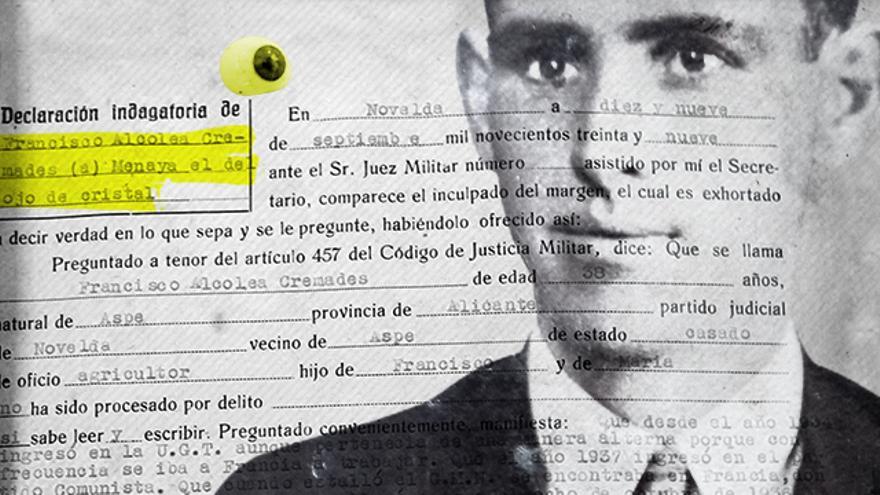 The glass eye that Francisco Alcolea Crémades wore since 1937 has served his family today to reach him. A Francoist court tried him and sentenced him to death, accused without evidence of participating in the lynching of the Calpenas, a well-known family of espadrille industrialists. Shot on the wall of the Rabasa barracks in 1941, his body has been located in grave 20 of the Alicante cemetery along with other victims of reprisals, the first exhumed in the province, and the curious object has been found among the remains. 80 years later, the glass eye they put on him in France after losing his while working has served to identify him.

"I have been going to the cemetery every week to see how the excavations were going. I always told them to please be attentive because with my grandfather there was a reference. He was missing an eye and had a glass one. Until he appeared and there was no doubt ", says Francisco Alcolea Torá, who has the same name as his grandfather. The idea of ​​the family is that the remains be deposited next to his wife in the Aspe cemetery, where he was a neighbor. "It's closing a wound," Francisco breathes with relief.

The glass eye "is in perfect condition", explains José Ramón García Gandía, professor at the University of Alicante and co-director of the excavation, carried out by the archeology company Drakkar Consultores. The object was found "on one side of the body, at the level of what could be the pants pocket" along with two pencil leads and a pack of tobacco, so it is most likely that he kept it before he died . Now the remains are pending DNA analysis that will verify the identification.

It is probable that with this pencil he wrote the last letter he sent to his wife and that the family keeps. "My dear wife, this is to tell you my last words," he said goodbye shortly before he died. In it Francisco talks about his children, three, six and 12 years old, and reminds his wife, Paquica, that he is entitled to receive a pension and that he finds someone who "knows French" to help him with the paperwork.

Francisco Alcolea was born in Aspe (Alicante) in 1901 and dedicated his life to agriculture, not only in his native land. He very often traveled to France to work and during one of these stays in the neighboring country he had an accident at work; a stone flew directly into his right eye, and he lost it. "From there he sent a photo to my grandmother after putting her glass eye. He took it and sent it to her so that she could see that he was still attractive and that it looked good on him," says his grandson.

Francisco Alcolea was sentenced to death on June 26, 194, according to what appears on the death certificate, and transferred to a common grave in the Alicante cemetery along with other executions: 11 in grave 36 and eight in grave 20, who have opened with the support of the Generalitat Valenciana, the Aspe City Council and the local association Cinco Ojos. According to the sentence that sentenced him, he had been a militiaman in the war, belonged to the UGT and was affiliated with the PCE. In addition, he was a director of the Los Convencidos agricultural cooperative, which seized land to distribute among the community. He was arrested at his home in 1939.

"A certain 'Paco Picote', a neighbor informer, appeared with the Civil Guard one night and they arrested him, maltreating him and shouting. It was the last time my father saw him, until the day of the trial, that he was able to see him for a window of the courthouse in Alicante," says Francisco. He passed through the Novelda prison, where his wife and eldest daughter brought him food and clean clothes, until in February 1941 he was tried by a military court. The trial, recalls his grandson, barely lasted an hour. There were 57 people involved in summary 4804. The case refers to him as "the one with the glass eye".

Francisco was one of those accused of participating on July 7, 1937 in the lynching of Ramón Calpena, his son Luis and his son-in-law Javier González. The events began with the arrest of the three by the Republic, accused of encouraging the military rebellion. They were sent to the Totana labor camp (Murcia) and later returned to Aspe under house arrest. "They had had many labor and social conflicts with the people, who had a feeling of revenge," says García Gandía. As soon as they return, the family is robbed in their house and the altercations end with the death of the Calpenas.

"The Republic had given an order to end the repression in the rear, so the suspects are arrested. The case goes through the Espionage and High Treason Court of Valencia, which is recused in favor of a popular court in Alicante, but all they are acquitted. We are at war and somehow the opportunity to have done justice and to have judged him correctly is lost. Someone did something wrong", explains the professor from the University of Alicante.

The point is that years later, in 1941, and as part of the process of repression and purging of the dictatorship, the Franco regime reopened the case. "Right now we find ourselves with a justice with the desire to purge all the people who had held a political and trade union position during the Civil War. They detained 80 people and 19 were shot in this case," says García Gandía. Among them, Francisco, who had not been arrested in the previous process, or the mayor of Aspe, the socialist Pascual Cánovas, who had actually asked for reinforcements to prevent the lynching of the Calpenas.

As can be read in the case, during the trial Francisco Alcolea denied having participated in the altercations and assured that that day he had gotten up "at dawn" and had been sulfuring in the garden.

Getting here has not been easy for his grandson Francisco, who has been researching his grandfather since the early 1990s. "I wanted to know what had happened to my grandfather, we had very little information. My grandmother talked about it in passing, What she did think is that she would have liked to have him with her," she recalls. After the incessant search and tracking through archives, the court or the cemetery, Francisco was able to learn details of the story, but it was completed with the entry of the investigator García Gandía in the military archive of Madrid, where he recovered the summary.