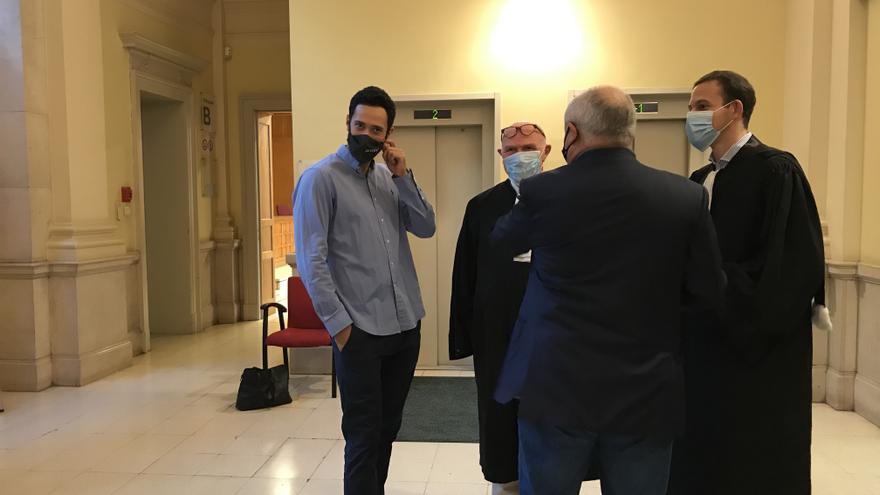 Josep Miquel Arenas, Valtònyc, was sentenced in 2018 to three and a half years in prison for insults, glorification of terrorism and death threats. And this Tuesday, September 15, the court of appeal of Ghent (Belgium) has decided to refer a preliminary question to the Belgian Constitutional Court on the extradition for terrorism carried out by Spain after the rapper left for Belgium in June 2018. What the court of Ghent to the Constitutional is if the crimes of libel for which Valtònyc has been convicted in Spain are protected by a fundamental right such as freedom of expression. The hearing has been set for next December 3.

"It is good that this happens because the Bourbons make a mess every day, everything that means buying time is going well for us. I have been condemned for making a spoiler when I said that the Bourbons are thieves and gangsters ", Valtònyc declared at the exit of the hearing. With this decision, the process can be extended up to a year, according to Valtònyc's lawyers, when the Belgian Constitutional Court decides:" As It has happened with Lluís Puig, in Belgium the Spanish Supreme Court has declared itself incompetent and I would not mind showing that the National Court and the Spanish Constitutional Court are also incompetent ".

The lawyer Simon Bekaert has explained: "Of the three crimes, the threats and the glorification of terrorism have already been dismissed in the courts. Now the question is about offenses to the king. In Belgium we have a law on the XIX relative to offenses to the king. King, and the consultation is made as to whether the Constitution guarantees freedom of expression. We are very confident in the result of the jurisprudence of the European Court of Human Rights in Strasbourg, prioritizing freedom of expression. "

The Belgian justice rejected in the first instance the delivery of Valtònyc in September 2018 alleging that there was no double criminality, that is, none of the three charges for which he was convicted in Spain are classified as a crime, neither in Spain nor in Belgium. decision appealed by the Ghent Prosecutor's Office.

Between the first rejection and the sentence that will be read this Tuesday, there has also been a preliminary ruling from the Court of Justice of the EU, last March, in which it failed that Spain did wrong when applying the Penal Code of 2015 to Valtònyc. Spain's thesis defended the application of the Spanish criminal law of 2015, when the sentence against Valtònyc was passed, and that it punishes in a more severe way the apology of terrorism, instead of that of 2012, which is more beneficial to the interests of the rapper Mallorcan and that implies an insufficient a priori sentence to be extradited.

Valtònyc was also condemned in Spain for insults to the Crown, "for telling the truth", the rapper adds: "Everything I said is documented in the media and in books. In the end I am not a seer or I'm not a guy with a very, very broad view of politics. It's not my thing. I've been condemned for saying something that everyone knows. "

Gonzalo Boye, one of his defense lawyers, abounds: "In any other country, after what happened with the king emeritus, who has fled Spain, they would have reviewed the sentence. It is a crime that must be contextualized. In Belgium, Yes, there is double criminality with insults, although it has not been applied for many years, but in the end they are understanding that it is freedom of expression, because with exaltation and threats, crimes have no correlation in Belgium. "

The Court of Justice of the EU ruled in a preliminary ruling requested by the Ghent court that Spain did not do well to apply the Penal Code retroactively to have a greater penalty. "They wanted to apply the Penal Code of 2015 that already punishes the apology of terrorism with three years in the Spanish State", says Valtònyc: "That gave them a sentence of three years for a single crime, not combining the three crimes. The lawyer noticed and they have proved us right. "

Spain's thesis in Luxembourg defended the application of the Spanish criminal law of 2015, when the sentence against Valtònyc was passed, and that it punishes the apology of terrorism more severely, instead of that of 2012, when the events occurred , more beneficial for the interests of the Mallorcan rapper and that implies an insufficient a priori sentence to be extradited.

The Belgian justice rejected in the first instance the delivery of Valtònyc in September 2018, alleging that there was no double criminality, that is, rejecting that none of the three charges for which he was convicted in Spain are classified as a crime in both Spain and Belgium , a decision that the Ghent Prosecutor's Office appealed.

Once the decision of the Ghent Court of Appeal is made, the parties can appeal to the court of cassation, where the forms of the process are reviewed, not the merits.