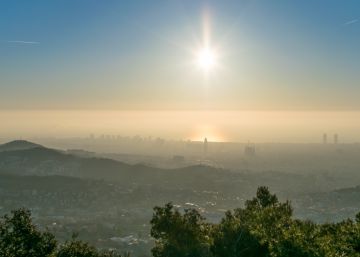 The Department of Territory and Sustainability of the Generalitat has declared an episode on Monday contamination by PM 10 microparticles throughout Catalonia. The Catalan government also maintains the preventive warning for NO2 in the 40 municipalities of the special protection zone (SPA) of the atmospheric environment. Municipalities such as Barcelona, ​​Hospitalet de Llobregat, Sabadell … where the Catalan government declared in 2006 that nitrogen levels, without any episode of contamination, were in themselves "above the admissible levels" for human health and the environment .

Despite the seriousness of the situation, the high contamination by particles does not entail any type of restriction of traffic and the measures activated by the consistories aim to expand the irrigation of streets and restrict the works or activities that generate dust.

As reported on Monday in a statement, the Generalitat will monitor the evolution of the levels and report their status every day, until the end of the episode by particles, which will not involve traffic restrictions, and the preventive warning NO2

The decision has been taken by the General Directorate of Environmental Quality and Climate Change taking into account both the data recorded by the Air Pollution Surveillance and Forecasting Network since June 24, 2019, and the forecasts of the dispersion models of the contaminants that the Conselleria has.

The vice-president of Mediamabiente of the Metropolitan Area of ​​Barcelona (AMB), Eloi Badia and the Vice-president of Mobility and Transport, Antoni Poveda, have sent to the Town Councils the list of preventive measures and that gives the power to the consistories to stop works and recommend the use of public transport.

From Sant Joan, the daily limit value of PM10 has been exceeded by 15 times in 15 measurement points and the 24-hour forecast indicates that the PM10 levels will remain high and could exceed the daily value of 50 micrometers per cubic meter during this period. Monday.

The activation is foreseen within the plan of action for the improvement of the air quality, and recommends to the citizenship to make the journeys on foot or by bicycle and to use the public transport, to reduce the displacements with private vehicle, among others.

On the other hand, the Interior Minister of the Generalitat, Miquel Buch, has limited the area burned by the fire of Ribera d'Ebre (Tarragona) in 5,050 hectares that originated last Thursday. Buch added that, during the work to put out the fire, there have been 11 more fires simultaneously and between June 23 and 30 have been declared 728 fire in Catalonia: "We are at a critical time," he said.

The Meteocat also foresees a new wave of heat for this week, although it will not have the same intensity as the current one. "Hydric stress will aggravate, we need the collaboration and awareness of the Catalans, we are at a critical moment, and we must take care of our forests and self-protection," said the counselor.