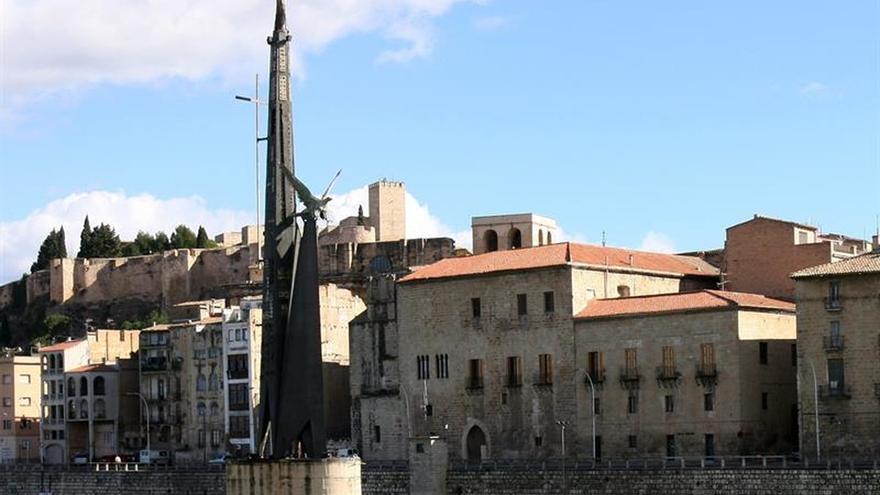 The Generalitat has put out to tender the geotechnical study to start the works to remove the Francoist monument from the Ebre river as it passes through Tortosa (Tarragona), and estimates that the work may begin in June 2021. The Minister of Justice, Ester Capella, has explained it , at a press conference on the banks of the river with the vice president of the Government, Pere Aragonès, and the mayor of Tortosa, Meritxell Roigé. The removal of the monument has not been without political controversy in recent years for the initial rejection of JxCat.

Capella explained that this Friday the study to secure the river bed, where a large tonnage crane will work, has been put out to tender, and has detailed that the works to remove the monument will be put out to tender in January, and they estimate that it may begin in June, when the river flow will be lower and will imply less risk in the works. He added that they already have a study that supports the feasibility of removing the monument, “an executive project that details the deconstruction process step by step”, for which they have already requested licenses from the City Council and the Ebre Hydrographic Confederation.

The Francoist monument, 45 meters high, was installed in 1966. It will be removed by means of a 36 meter high scaffolding around the monument, which will be raised from the base of the pedestal. The operators will segment the work into pieces, from top to bottom. They will do it with the oxyfuel method, which consists of sectioning El Hierro at a temperature of 800 degrees, with a mixture of oxygen and propane gas applied at high pressure. The scaffolding will be dismantled as the two iron pyramids lose height. The pedestal, which is a font from the old Ribbon Bridge, will remain, but without the inscription that currently exists: “To the combatants who found glory in the Battle of the Ebro”.

Along the same lines, Aragonès has claimed that there are no impediments: “We hope that the State will not be tempted to do a job that they should do. We are willing to erase everything that exalts a dictatorship that we want far away.” He has reproached that “this monument remains standing because for too long the Spanish State has applied the policy of forgetfulness, this State that has not apologized for President Companys is the same one that has not cleaned up the war.”

Aragonès has asked not to give any legitimation to fascism or to “this extreme right that Vox represents in the Spanish state and that some forces such as PP and Cs with their pacts have contributed to whitewashing.”

The mayor of Tortosa has affirmed that if the council had not removed the monument until now, it was due to lack of powers, and has asked that the decision not involve confrontations: “For many people, this monument, beyond its origin, has been part of the city. Like it or not, different generations have grown up in Tortosa without seeing it as a symbol of the Franco regime but have treated it as part of the landscape “.

Roigé has also asked the Government that, once the monument is removed, they use the pilaster that supports it to build a walkway that connects both sides of the city, to recover “the historic passage of the bridge destroyed during the fighting in Tortosa during the war.” , and which was supported on the same pilaster as the monument.