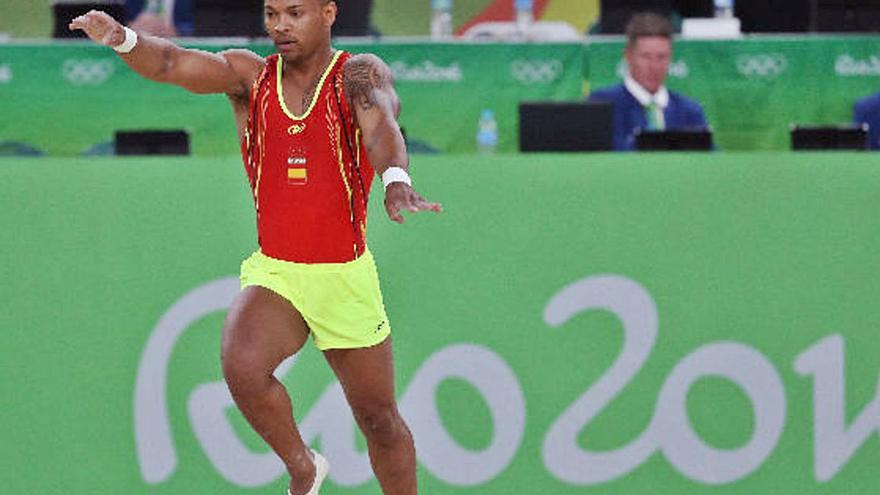 A few hours after the end of Thursday night, the alarm goes off. The Times newspaper launches the bombshell. “The Japanese government privately concludes that the Games should be canceled.” With this headline the English tabloid was launched in its issue today and both the Olympic Committee and the Japanese prime minister had to keep up with the information to calm the spirits of athletes throughout the planet.

The gymnast Ray Zapata, the handball player Almudena Rodríguez and the shark in the pool, Enhamed Enhamed, are present as regards the Canarian Navy that is planning to attend the Tokyo Games. Three banners of those who aim for the medal live it calmly but at the same time aware that the uncertainty that looms over the Olympic event due to the covid is there.

The gymnast just wants to keep his mind focused on the Games and that is why it bothers him that news such as the one that the Times revealed during the night of last Thursday and that he calls “hoaxes.” For the Lanzaroteño, all these doubts are bad for his concentration and he even opens the option to “delete all social networks to be more focused only on Tokyo”, since it can influence his motivation.

Zapata explains that yesterday morning he got up and saw the news in the English tabloid and the first thing he thought was: “It’s over.” A moral blow at that moment and that as he continued to read the statement of the Japanese prime minister that ensured the continuity of the Olympic calendar and the holding of the Games in the Japanese country, the Conejero reassured himself.

“I am not going to stop at any time because a high-level athlete always has to be prepared to compete in any situation, rain or shine, and the Games are the dream of all athletes, it is the great event,” emphasizes the gymnast, who does not think to lower his arms for a second to get the coveted medal.

Hanging a medal is the goal of this gymnastics champion. “The medal would be the perfect culmination to the great sports festival, but for now I have to concentrate on what I have in my hands, which is the daily training as the CAR psychologist tells me,” adds the Lanzarote native.

In order not to get lost in the way of the uncertainty and confusion of Tokyo, Ray takes it as if his career until July was treated as a labor competition. “Everyone who studies to obtain a place does not know when the exam will be, but once it is called, you are ready, if you stop studying by the way you will surely not pass,” he adds.

The pre-Olympic in mind

Almudena Rodríguez lives in a similar situation in Romania. The Gran Canaria right-back lives day to day in the ranks of Gloria Bistrita with her sights set on a possible call by Carlos Viver to go to Tokyo.

Even so, the Guerreras have to go through the pre-Olympic that was canceled last year to be played in Llíria (Valencia) and that will be resolved next March, from 19 to 21, with the fight of the national team against Sweden, Argentina and Senegal with two tickets at stake for the Olympic tournament that will start between July 23 and August 8 if everything runs its course.

A two-month pre-Olympic event to which Almudena aims as part of the national call, along with Silvia Navarro, another of the fixed ones, and which, as the Teldense points out, had already been in mind since last December when Spain fell from the race for medals in the European championship.

“In the last European games in which we no longer played anything, the feeling of thinking about the pre-Olympic began to be created, we were already talking about that date and it is what awaits us now ahead to know if we can be in the Games ”, Pronounces the lateral from the Caucasus.

Because for Rodríguez, 27, the Tokyo event would be his first Olympic event and he “really wants” to be able to live the experience of defending the colors of the Warriors in the most important tournament possible. “The uncertainty is there because going to the Games is a dream that every athlete has and the truth is that I am very excited to be in Japan.”

He will also have to go through a pre-Olympic now Enhamed Enhamed. The best Paralympic swimmer in history, winner of four gold medals and nine total medals, has to renew his brand to attend his fourth Olympic Games after skipping the ones in Rio and returning to the pool to “enjoy”.

“What is going to happen now? Well, good question. As the coronavirus is not affecting everyone, because I decided to return to Gran Canaria three weeks ago and return to CN Las Palmas to train for the brand that I have to sign again since the previous one is not worth me, but what better way than to return to my origins to be about to revalidate that brand ”, reveals the best Canarian athlete in history.

“I have several competitions in February and March in which I can reach the minimum, even so I have until June, but of course with everything that is heard about the new strains and with all the uncertainty of whether or not the Games are organized, well We will see what happens ”, Enhamed review, adding,“ athletes must have enough tolerance to failure to add this confusion ”. We will see…

In the image above, Ray Zapata at the Rio 2016 Games; In the two lower photographs, on the left, Almudena Rodríguez shows the medal of world runner-up in 2019; and to the right, Enhamed Enhamed with one of his four gold medals in Beijing 2008. |

The Lanzarote gymnast was taken by surprise by the news in the Times and thought for a moment that it was all over. Once the IOC came to the step of the information, it bothers him that this type of news can deconcentrate him. Still, it’s full for Tokyo.

The Teldense winger wants to be part of the “dream of any athlete” which is to attend an Olympic event. For this, the national team has to get its ticket in the pre-Olympic that will be played in Valencia between March 19 and 21. They would be his first Games.

The most successful Paralympic athlete in the history of national sport returned to the pool after retiring and Tokyo 2021 is his great goal, for which he has been training for three weeks on the Island. He has until June to revalidate the Olympic minimum.