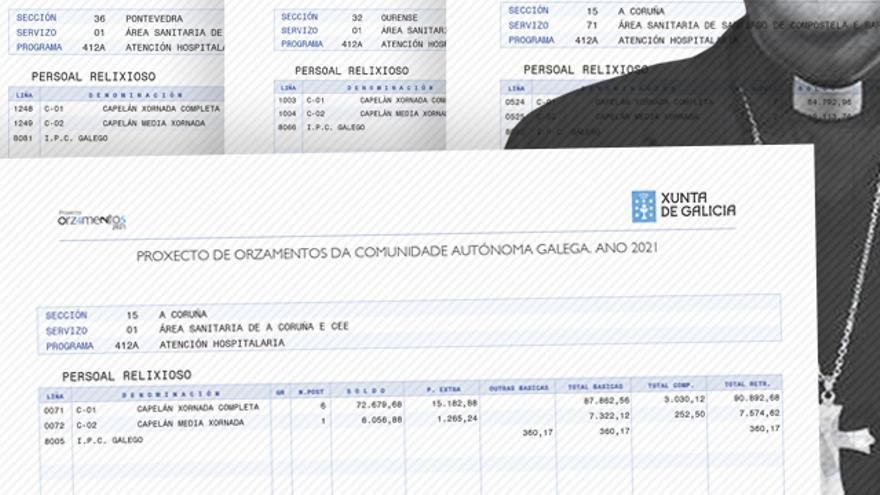 The budget project for 2021 that Alberto Núñez Feijóo has already brought to the Galician Parliament foresees an item of almost 700,000 euros in the accounts of the Galician Health Service (Sergas) to pay the salary of priests. It is about paying the salaries of 41 priests who perform chaplain functions in the hospitals of the seven health areas of the autonomous community and another 11 who do it part time. The presence of religious in hospitals is part of the usual landscape of the Galician public system. The chaplains perform shifts and night guards, use the restaurant checks and the rooms in the same conditions as the restrooms that the night guards perform.

Santiago, Vigo and Ourense are the three health areas with the highest number of priests hired in charge of the Galician health budget. In each of these areas, the Xunta de Feijóo pays the salary of seven full-time priests and another two part-time. A Coruña, Lugo and Pontevedra will keep six full-time religious in their hospitals at the expense of the public treasury and the Ferrol health area will have two full-time and another two part-time.

The average salary for one of these religious full-time is 15,000 euros per year. The position allows them to reconcile their responsibilities in health centers with the care of their parishes. According to hospital sources, “these are highly contested positions and almost always in the hands of elderly priests who get a supplement to the salary they already receive from their corresponding diocese.”

The decision of the Xunta to charge the expenditure on priests to its health budget is not new. The number of 41 priests paid with money from the Galician Government has remained unchanged since the 1990s, when Manuel Fraga signed an agreement with the church by means of which the administration took charge of the expense. Even during the bipartite that the PSOE and BNG shared, the payment to priests in the Galician health system remained unchanged.

As the years passed, and the Popular Party was back in power, the measure began to be questioned in the Galician Parliament by an opposition that never managed to convince the majority group to redirect spending towards strictly medical purposes. The Socialist Party requested it in 2017 and in response the PP used the following argument: “The public is not bothered by it.”

In that debate, the socialist Julio Torrado assured that the money destined for priests would allow “to hire 15 primary care or emergency physicians” or “20 physiotherapists.” “It is more important to hire doctors, nurses or physiotherapists than cures,” he synthesized to defend an initiative that also received votes in favor of En Marea and BNG. Now, with the advance of the pandemic giving signs of lack of control and the healthcare pressure increasing day by day, the debate on the relevance of spending 685,748 euros of the healthcare budget on priests is gaining weight again.

In an interview with this newsroom, the Minister of Health, Julio García Comesaña, explained that the Galician success in the first phase of the administration of the vaccines against COVID-19 has been achieved with only 200 nurses at the helm of the work. For every five of these workers to whom Sergas pays the salary, there is a priest who receives a check from the same bag.

When asked by elDiario.es, the official spokesmen of the Galician Health Service assure that it continues to operate with the criteria of the 90s, by virtue of the agreement signed then between Fraga and the leadership of the Church. According to the same sources, the functions of the priests consist of “the rendering of religious services and the accompaniment for the extreme unction to the patients who request it.” All the religious paid by the Xunta belong to the Catholic Church.

The functions of the priests have been very limited in the COVID scenario. Most of the hospital chapels are closed tight, as confirmed to this writing by the Department of Health. Religious also cannot access most areas where patients affected by the coronavirus are treated. In some hospitals affected by outbreaks, such as the centers located in Santiago, they cannot even access the conventional hospitalization areas. Despite all this, the Xunta once again reserves an important part of its health budget for personnel with bands: a total of 700,000 euros in 2021.