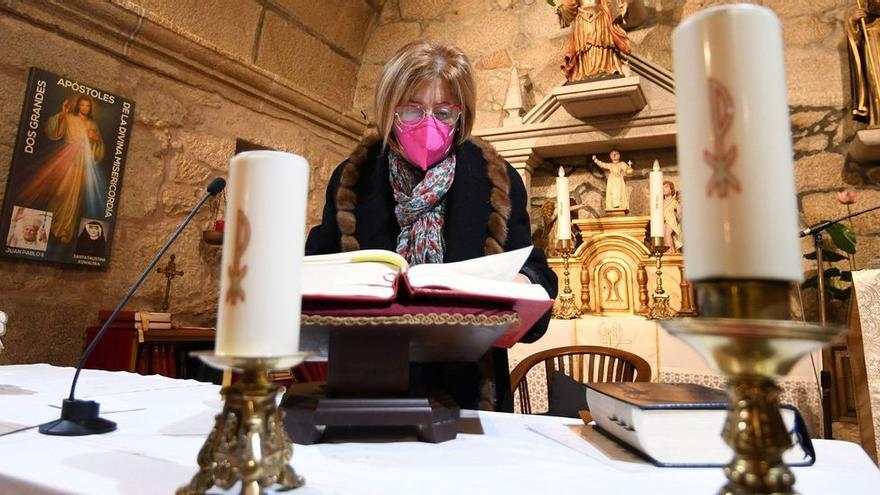 This Sunday's mass in Santa Cristina de Cobres, in Vilaboa (Pontevedra) ended in applause. It was a spontaneous and sincere applause, in recognition of the emotion with which María Canosa Otero officiated –as he has been doing every Sunday since last December 19– the reading of the Gospels, in the absence of the parish priest, Guillermo Campos. The priest fell ill on December 6 and since then María Canosa, a neighbor and socialist councilor from Vilaboa, has been in charge of the religious acts that a layman can lead.

Canosa, with the help of Estefanía Táboas, offered the mass for the recovery of Don Guillermo, pastor of this parish since 1985. The emotion broke their voice at some moments, mainly in the chants, which the parish priest of Santa Cristina cares so much about in his trades, according to his collaborators.

In addition to Sunday mass, Canosa has already officiated at Christmas, New Year's and Epiphany celebrations. He does it, he explains, to keep the parish together and to continue with the work that Don Guillermo does "until he can return." The priest, indicates María, is excited to give mass at Easter and on the last visit to the hospital “I promised him that I will bring him myself, even if it is in a wheelchair.”

This councilor, who has been part of the Vilaboa local government since 2003, He regularly collaborates in the parish as a catechist. He explains that he feels the need to help the priest and that he does it “from the heart, because he has always helped me a lot, he behaves very well with me, just like with everyone else,” says María, to the assent of Estefanía Táboas and Maruchi. Vidal, who at the end of the religious act this Sunday recalled the many occasions in which the parish priest helped the neighbors.

During her visits to the hospital, where the priest is trying to overcome a serious illness, María jokes with the priest when he tells him that she is going to take his place: “He has a cassock made for me because I am going to take your place.” As the priest maintains in the hospital the sense of humor that he always had, María tells him that "I'm going to put on my miniskirt to get the men out of the bar and bring them to mass". Occurrences that amuse the priest, who following the joke encourages him to do so.

As a layperson, María cannot consecrate or give peace, but she does the rest of the rituals of the office: she leads the prayers, reads the Gospels, distributes communion and invokes the prayers, which this Sunday were for Don Guillermo, for all those sick with the parish and for the soul of Lionil Gavilanes, a deceased neighbor in Venezuela.

She officiates at the reading in her lay clothes, but when asked about this, she explains that as an altar girl she could wear Alba's white tunic worn by the priest's assistants.

The sacred wafers are previously consecrated by the parish priest of San Adrián, who also goes to the parish of Santa Cristina to officiate at the funerals. “Because you still can't bury people”, her friend Maruchi Vidal jokes with María.

Within the pranks that this matter allows her, María also told the priest of San Adrián that "I'm going to become a priest." Following the joke, he replied that "you are not going to be a priest, but you already have the title."

"It is well cared for"

The lack of clerics has meant that some parishes in Vilaboa are sometimes served by a religion teacher, or by a nun who sometimes also came to do the readings. But speaking about these substitutions with the vicar of Pontevedra, the parish priest of San Adrián told the ecclesiastical delegate that Santa Cristina "is well cared for."

Estefanía Táboas Pereira, who sings the chants at mass, had her voice break on several occasions when she remembered the parish priest, Guillermo Campos, whom she has been helping for more than ten years. "He is a very good person, one of those who no longer remain," says Fany Táboas. "We went together practically every day from here to there," he explains, since he also accompanied the priest to the Vilaboa parish.

Maruchi Vidal is also moved when he remembers how much Don Guillermo helped his family during all his years as parish priest. He remembers with humor when he taught them to sing saetas to perform at Holy Week. “He really enjoys music, he lives it, and he also sings very well”, adds Maruchi Vidal.

While they talk and remember other anecdotes about the priest, María Canosa's phone rings through her Smartwatch. We ask him if other parishes call him to say Mass and he keeps the joke: "If they pay me well, I'll go."

The talk concludes by asking us to return to the parish when Guillermo Campos returns to say mass.