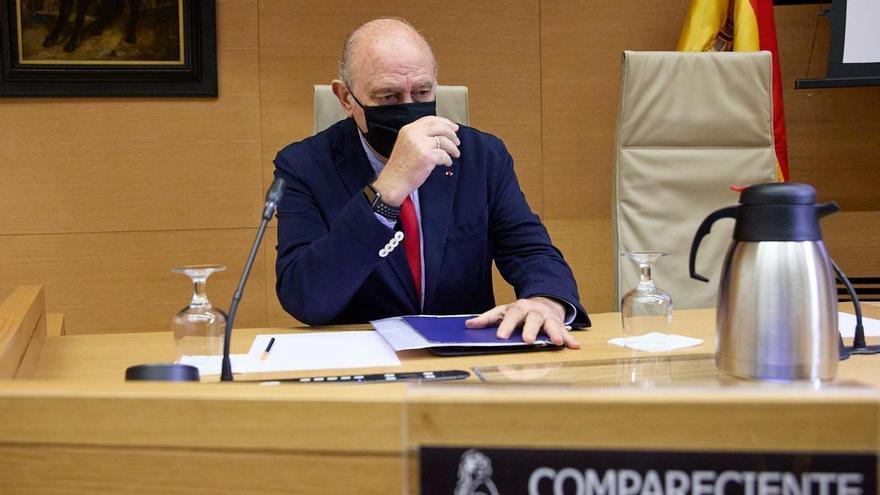 The Minister of the Interior between 2012 and 2016, Jorge Fernández Díaz, has defended his absolute ignorance of the espionage operation against Luis Bárcenas out of the reserved funds, if it occurred, as he has said. At the same time, and as he already advanced in the appeal against his prosecution, Fernández Díaz has pointed to the PP by ensuring that the parapolice operation could not be born in the Ministry of the Interior because the interest in Luis Bárcenas did not correspond to the department he directed but to whom could harm, the Popular Party.

To questions from the spokesperson for United We Can, Rafael Mayoral, former Minister Fernández Díaz said: “That operation that is being investigated [Kitchen] It brings cause that Bárcenas was in preventive detention in a procedure that was being developed in the Central Court of Instruction 5, this other is 6, and the papers of Bárcenas had come out … I said: ‘hey, Mr. Bárcenas is not an official of the Ministry of the Interior ‘(…) “.

Before, Jorge Fernández Díaz had also said that no one from the party, including his then general secretary, María Dolores de Cospedal, never “made reference” to the corruption issues that affected the PP while he was Minister of the Interior, and has expressly cited Gürtel, Lezo or Púnica.

The Popular Party route was provisionally closed by Judge Manuel García-Castellón when on July 29 he ordered the closure of the investigation, filed the case against the former secretary general of the party María Dolores de Cospedal, and refused to question the President of the Government then and of the party, Mariano Rajoy. The other avenue that the judge has refused to investigate is the possible participation or knowledge of the CNI in the operation to favor the interests of the Popular Party. Fernández Díaz, faced with Soraya Sáenz de Santamaría, along with other government ministers, has remained silent in this regard but specifying that he is trying to defend himself in court and that he could not, nor should he, say more.

The spokesperson for Vox in the commission, José María Figaredo, directly appointed the intelligence service and whoever had command over him in the Government of Rajoy, vice president Soraya Sáenz de Santamaría. Several indications of the possible knowledge and / or participation of the CNI in the operation to favor the PP dot the summary, although the investigating judge, Manuel García-Castellón, has avoided delving into that thesis. Among these signs is the message between Fernández Díaz and his deputy, Francisco Martínez, about “cecilio contact”, a police term to refer to intelligence service agents.

Figaredo: “What is unfair is that you remain silent and other people implicitly point to you. In whom could Mr. Villarejo’s information channels lead? One of the options was Mrs. Soraya Sáenz de Santamaría, who was the head of the CNI and in turn it has been proven that the CNI had an interlocution with Mr. Villarejo … ”

Fernandez Diaz: “You will understand that I prefer not to comment on that. It would be an opinion … I am exercising, in court and here, my right to defense and that restricts me. I do not want to attack anyone. I do not want to accuse anyone. I am defending myself against the accusations that have been made to me, even reversing the accusation, the diabolical test: ‘prove that you have not done this’. Forgive me because I cannot go further and I must not go further “.

“I have the moral conviction of who manipulated the recordings”

Fernández Díaz has been visibly upset when several spokesmen have made him see that he lied in the investigation commission on the partisan use of the Ministry of the Interior in 2017 when talking about the recordings in his office with the former director of Antifrau. There he said that he did not know that they were recording him, a version that he corrected in his memoirs. Fernández Díaz has insisted that he did not lie to the astonishment of the spokesmen, including that of the PNV, Mikel Legarda, who the former minister attacked, accusing him of misrepresenting his statement before the commission, of which the Basque party spokesman was president.

“These tapes were manipulated with the intention of damaging me and they come out in fifteen-second editions that were commented on. I was head of the list for Barcelona and acting Minister of the Interior,” said Fernández Díaz, who has not delved into which people or organizations they could have access to those recordings and the capacity to supposedly manipulate them, despite the insistence of the EH Bildu spokesperson, Jon Iñarritu, in this regard. “I have the moral conviction and I know it, but I have no proof,” answered Fernández Díez.

Fernández Díaz has said that if he defended Villarejo when his enormous heritage in tax havens was published, it was because he requested a report and the “General Directorate of the Police” informed him of the important services against the fight against terrorism and organized crime that the police in the past. At that time, Ignacio Cosidó was the general director of the Police, whom the judge has also refused to take a statement, not even as a witness. The Anti-Corruption Prosecutor’s Office has appealed the closing of the investigation and it is pending that the Criminal Chamber of the National Court decides this and other appeals.