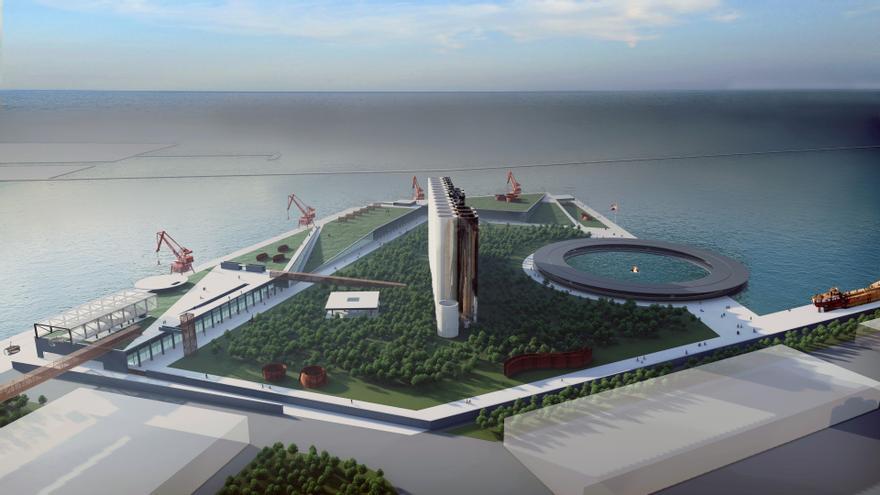 Beirut, Feb 4 (EFE) .- Six months after the explosion in the port of Beirut, the authorities begin to outline their plans for the future of the area where the deflagration originated, causing more than 200 deaths and 6,500 injuries, while some initiatives advocate turning it into a park for collective memory.

The World Bank estimates that the reconstruction of the capital’s port, where you can still see a large hole at the site of the August 4 explosion and a lonely building in ruins, will cost between 425 and 520 million dollars.

The director of the port, Bassem Kaissi, explained to Efe that since before the destruction there was already a “master plan” to modernize the facilities, which the authorities “are re-evaluating” now given the need to “redesign and restructure it.”

“What does the port of Beirut need? Modern warehouses because they are all gone and the expansion of two additional power plants in the free zone, a partial reconstruction and improvement of the buildings in the general cargo terminal for maintenance and for the department Fire and Customs “, he listed.

Kaissi, named after the arrest of his predecessor for his involvement in the tragedy, explains that they are going to launch tenders for the design of each of the “master plan” projects and adds that they have given the green light to an architect’s project to build. a “temporary monument” at the site.

However, he is not very convinced that it will be carried out due to the difficulties in accessing the materials, but he does rule out that a “permanent” memorial will be erected and ensures that none of the authors of the proposals that have come out a la luz has contacted authorities so far.

One of the strongest proposals is that of the renowned Lebanese architect Carlos Moubarak, who has been gathering opinions from the population and plans to hold conferences and other events to “fine-tune” his project according to the expectations of the Beirutis, especially the victims and their victims. relatives.

“This is a historical moment, a historical event, a historical explosion among the greatest of all time and occurred in the middle of the capital, which is unique in history, so that the event must be marked with something that is corresponds to its magnitude, “Moubarak said.

The architect explained to Efe that his design proposal has two central axes: the “epicenter of the explosion” and the silos that burned, an element that he wants to preserve despite the fact that now it presents “structural problems” and its maintenance would require one ” innovative technical solution “.

“The centerpiece of this project is what we call the ring of memory, this is the object that we consider an architectural crystallization of the deflagration and a materialization of this moment in time,” he explained.

That area would become a “symbol of unity” and “a place to mourn the loss.”

In addition, the memorial park would be “a vast open platform for artistic and cultural expressions, and social interaction,” while preserving the operational part of the port, with some 10,000 square meters of warehouse space.

But for him it is much more than a memorial, it is part of a “long” process of “transitory justice” for a population that in itself has a “very confused” relationship with memory after experiencing several wars in recent decades.

“The judges and prosecutors will have to do their job, and I, as an architect, urban planner and designer, am contributing to the non-judicial part of the transitional justice mechanism, to preserve the collective memory after the national trauma derived from the tragedy” , he concluded.

One of the first ideas to rebuild the port of Beirut appeared just a month after the explosion of the hand of the Portuguese conceptual designer Tomás Reis, 29, who “moved” by what happened created a series of “concept images” for a future memorial at ground zero.

In a telematic interview with Efe from Lisbon, the young man explains that it is not an “architectural project” but a “theoretical idea” still in its “first conceptual stage”, so for his design he did not set “limits” of any kind, not even in terms of its “viability.”

“It is not at all intended with the intention of answering questions, it is aimed at raising questions about some elections that the people and authorities of Beirut will have to grapple with over the next few years,” Reis added.

The project includes a kind of concentric lines, which expand as a metaphor for the “shock wave” from the place where the deflagration originated, the ones inside being a reflection of the past made of cement and stone, as well as an amphitheater and a main walk.

Beyond that, there would be “green belts” with Mediterranean vegetation, giving shape to an idea that also aims to preserve the old silos by adding landscape elements related to the port and the city, and in turn building new ones on the premises.

The conceptual designer claims to be available to cooperate with those in charge of rebuilding the port because “whatever is decided will help the image of the city and will also be related to the collective memory, with how history will be taught to the next generation. from Beirut “.