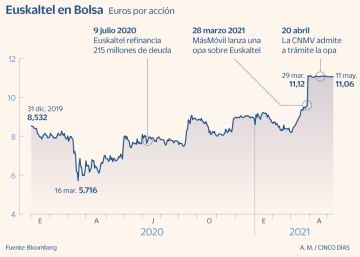 The consolidation process in the telecommunications sector had already directed all the funds’ eyes to small listed companies and the takeover launched by MásMóvil to Euskaltel has fueled the appeal of the telecommunications company that operates in the Basque Country, Galicia and Asturias with the Euskaltel, R and Telecable brands. Investment funds and hedge funds hold a stake valued at 511 million euros in the company in the full takeover of MásMóvil, according to yesterday’s closing price. Between all of them they account for 27% of the capital of Euskaltel.

MásMóvil announced on March 28 a tender offer for 100% of Euskaltel’s shares through the company KaixoTelecom at a price of 11.17 euros per share, which represents a premium of 26.8% compared to the weighted average price of shares in the last six months. At the close of yesterday, the Euskaltel share stood at 11.06 euros, which allows the funds to scratch some slight gains on their investment in the current environment of ultra-low interest rates since the offer has an irrevocable acceptance commitment of its main shareholders, who represent 52.32% of the capital: Zegona, Kutxabank and Alba.

The MásMóvil offer drew the attention of the large fund managers for Euskaltel from the first minute, since the union of both will allow them to become the third operator in Spain. The operation, conditional on achieving the acceptance of at least 75% plus one share of the capital, involved the landing of entities such as Citi or DWS. The first has a 1.005% capital since the beginning of April –after having been present in the capital of the company between 2015 and 2018–. Of this participation, 0.997% comes from direct securities and the rest from swaps.

For its part, DWS, the manager linked to Deutsche Bank, has 2.269% of the capital of the teleco, in which it landed on April 19 with the announced bid. A participation that reached 3.016% at the beginning of the month but has decreased in the last week.

One of the management companies that has bet the strongest on Euskaltel has been the American firm Capital, which came to surface a 12% stake in the capital of the company, becoming its fifth largest shareholder after Zegona (21.4%), Kutxabank (19.88%), Corporación Alba (11%) and National Neederlanden (6.85%). Although, in recent weeks it has chosen to make cash and has reduced its investment to 5.6% through two of its vehicles: Capital Income Builder and Capital Research Management Company. The first of them has reduced its presence to 2,654% of the capital and the second, which is the manager of the group’s funds in the United States, has dropped to 2,968%, which has allowed it to obtain about 130 million euros before the expectation that there will be no improvement in the price of the takeover bid.

The operation has also led to the irruption of the US hedge fund Magnetar, owner of Eurona, into Euskaltel’s capital. Magnetar, specialized in alternative investments, has reached 8.47% of the capital of the Basque telecom company, which became somewhat higher given that in recent weeks it has chosen to gradually reduce its exposure to the company, instrumented through three vehicles : Magnetar Capital Partners, Magnetar Constellation Fund II and Magnetar PRA Master Fund.

It has also entered the capital of the company Norges Bank, the Norwegian sovereign fund, which has a 1,663% stake recognized days after the announcement of the takeover bid.

The last entity to disembark in the capital of Euskaltel has been Barclays, which has risen 1.083% this week. A stake derived from holding 0.147% indirectly, plus another 0.828% for collateral and the remaining 0.108% that come from CFDs, as reported to the CNMV.