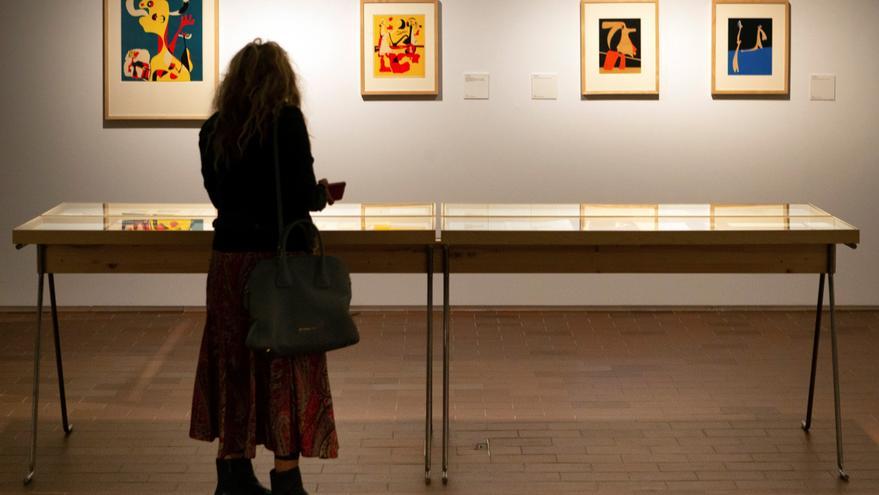 Barcelona, ​​Mar 11 (EFE) .- The Fundació Joan Miró recreates the five ephemeral exhibitions that the artist made in Barcelona so that the local avant-garde group ADLAN (Friends of New Art) could get to know the pieces that would later be exhibited in Paris. , New York or Zurich.

Under the title "Miró-ADLAN", this exhibition, which will be open to the public until July 4, also reconstructs the mark that this group of artists and intellectuals, an elite of the Catalan petty bourgeoisie, left on modern European art and his role in the introduction of cultural modernity in Barcelona, ​​which spread to the rest of Spain.

In the presentation of the exhibition, the curators Muriel Gómez, Jordana Mendelson and Joan M. Minguet, highlighted "the essential connections of this group of artists and intellectuals with Joan Miró, whom they took as the standard of their activity".

The exhibition brings together the documents and materials from the great ADLAN archive, kept in various public and private centers, mainly in the collections of the College of Architects of Catalonia and the Fundació Joan Miró.

United by ties of friendship with the promoters and honorary partner since 1933, Joan Miró became an emblem, advisor and mediator, since "he exhibited his most recent works up to five times and actively collaborated in all the projects that were developed in those years, in which creative freedoms were a priority objective ", remarks Gómez.

Muriel Gómez has said that "ADLAN, who had a short life, from November 1932 to June 1936, shortly before the outbreak of the Spanish Civil War, organized more than fifty events, which went beyond plastic art: painting , architecture, literature, chamber music, jazz, circus, cinema, dance, photography ".

These were "private calls and in alternative spaces, not only in galleries, but even in stores (Roca jewelry), but they achieved great public notoriety thanks, among others, to the impact on the press of the time."

Under his umbrella they exhibited figures of the stature of Alexander Calder, Man Ray, Hans Arp, Remedios Varo, Picasso and Dalí.

While, after the First World War, in the great cities of Europe the avant-gardes had the support of critics and collectors, here, Minguet recalled, "modernity needed the push of a group of visionaries who conceived the culture as a space of global freedom and that set out to break with the Noucentista heritage ".

It should not be forgotten, Minguet stressed, that Miró's 1918 exhibition at the Dalmau galleries was a failure, because the bourgeoisie rejected him, and "not only did they not buy any work from him, but they even made fun of him."

The exhibition draws the ties of friendship and social class that united the leaders and members of ADLAN, through photographs, abundant documentation and works such as the drawing-collage that Miró made in 1934 in homage to Joan Prats, promoter of the entity.

Around the two of them and Josep Lluís Sert, a long list of personalities with a common sensibility for new art gathered, such as Magí A. Cassanyes, Ángel Ferrant, JV Foix, Sebastià Gasch, Robert Gerhard, Lluís Montanyà, Mercè Ros, Carles Sindreu or Josep Torres Clavé.

For Jordana Mendelson, the exhibition also demonstrates Miró's "archivist" character, "aware of the value of memorizing his activities and the artistic process itself reflected in drawings and sketches".

"Miró-ADLAN" also reveals the fundamental task of documentation and conservation of Adelita Lobo, cultural manager, secretary, treasurer and member of the entity, thanks to which the memory of the group survives.

In the exhibition tour, the photographs help to expand ADLAN's intimacy, as in a trip they take to Andalusia, which confirms that "they were a group of friends," Mendelson notes.

The project, which has the collaboration of the Banco Sabadell Foundation, is included in the series "Miró Documents", which investigates new approaches to the artist's work from the archives of the Joan Miró Foundation Archive.