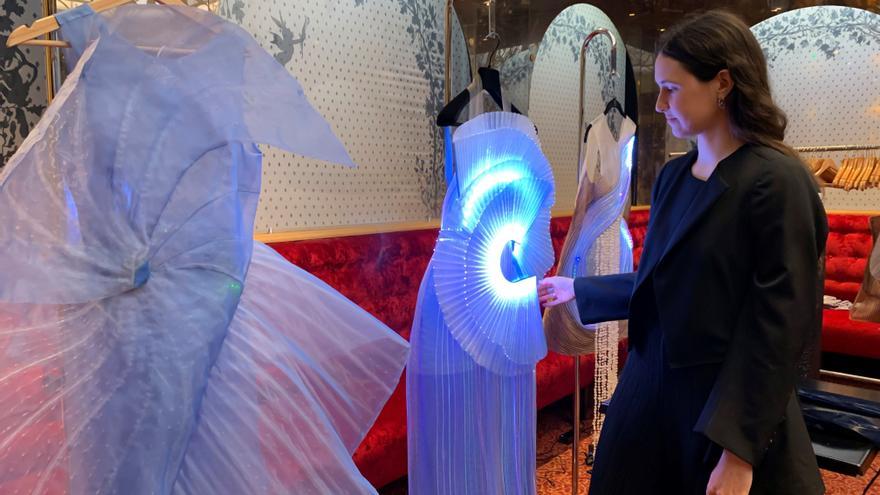 Paris, Jul 7 (EFE) .- They cannot be washed and they are probably not the best option to go to the office, but the luminous dresses of the designer Clara Daguin are one of the most groundbreaking bets of the current edition of Haute Couture from Paris.

Daguin, the daughter of an electronic engineer and raised in Silicon Valley, has ended up integrating into her life what she saw as a child on the American West Coast: cables, computers and all kinds of technological material.

After a brief stint in ready-to-wear, the 30-year-old dressmaker changed course to focus on Haute Couture creations, which preserve the value of know-how and craftsmanship, although in her case she was motivated by the ambition to explore the possibilities of integrating electronics into garments to create interactive dresses.

In a couple of years he has managed to shape jackets with lights that change color depending on the angle from which they are viewed and in his new collection, presented this Wednesday in Paris, he introduces connectivity systems in hand-made embroidery.

The Frenchwoman has relied on Google’s creative experimentation program and its “Jacquard by Google” system, which collaborates with design and science artists to try to imagine the new possibilities that technology can bring to human reach.

His new line, called “Oracle”, plays with the universe of tarot and spiritism, since its digital wiring is a kind of hand reader.

“When we bring our hand to the glove, the dress lights up and, the closer we get to the glove, the stronger the light,” says Daguin before the five creations he has presented in this edition of Paris Fashion Week, which has just this Thursday.

Presented at the Grévin Wax Museum in Paris, the five dresses have been made in silk and organza pleats that revisit a classic silhouette, with straight and minimalist cuts, enhanced with striking circular ruffles into which the luminous wiring is twisted.

The light of one dress with a spiral ruffle spins in a circle, increasing the feeling of hypnosis, while the skirt of another glows in gradient.

“I have always been among computers but I did not think about it when I was young, it is something that came later. I did artistic studies, then I went into fashion and that was when I integrated technology,” he says in an interview with Efe.

It all started with a small MIT workshop on the possibility of making interactive objects, in his case, Ikea chairs.

“That made me reflect and I started experimenting with electronic integration in garments,” he adds.

At the moment she works alone with the help of her father or, as in this case, two Google engineers, and the students who help her with the clothing.

“I like the idea of ​​doing experimentation on the body. It is not really a garment that we put on and take off, but it works well on video clips and red carpets,” explains the designer, who has also created an application so that the client can see which one. It would be the effect of the garment on.

Although not many experiment in this field, some creations have been successful on a commercial scale, such as the Levi’s “Commuter Trucker with Jacquard by Google” jacket, which allows the wearer to control music or calls on their phone. through the garment, sold for about $ 300 (plus 250 euros at current exchange rates).