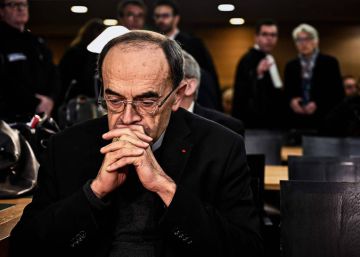 Bernard Preynat, the pederast priest whose case has caused the greatest crisis of the French Catholic Church and the condemnation of one of its principal cardinals, the archbishop of Lyon Philippe Barbarin until this year, can no longer be called a father, celebrate mass or hear confessions. Waiting for his trial before a civil court for abuse of dozens of minors when he was in charge of a group scout of Lyon between the 70s and 90s, a French ecclesiastical court announced Thursday its expulsion from the clerical state, the maximum penalty provided for in canon law.

"The abbot Bernard Preynat has been found guilty of having perpetrated criminal acts of a sexual nature against children under 16 years of age" and it has been decided "to apply the maximum penalty provided for by canon law in these cases, his expulsion from the clerical state", has communicated the Diocese of Lyon, from which the priest continued until now.

The sanction implies that Preynat will be permanently banned from holding mass, hearing confessions or administering other sacraments. According to Infovaticana, he is also exempt from obligations such as the prayer of the Liturgy of the Hours and obedience to his bishop. The decision to impose the maximum penalty was taken in view of "the facts and their recurrence", as well as the "large number of victims" of Preynat and that he "abused the authority conferred on him by his position within the Scouting group that he founded and which he directed since its creation," explained the Diocese of Lyon. Preynat now has a month to appeal the sentence before the Tribunal of the Congregation for the Doctrine of the Faith, based in the Vatican.

The religious, 74, has admitted that he abused dozens of minors until 1990. He was charged in 2016 for several of the cases that had not yet been prescribed and his trial is expected to begin in the coming months, although there is still no date fixed. His case has shaken the French Catholic Church like few others. Last March, the once almighty Cardinal Philippe Barbarin, friend of Pope Francis and his predecessor, Benedict XVI, He was sentenced to six months in prison with exemption from punishment for silencing Preynat's case, Although several of his victims came to him when they discovered that the priest, despite the promises of the Catholic hierarchy, continued to exercise functions that kept him in contact with minors. The sentence against Barbarin, the most powerful religious of France condemned for not reporting a case of pedophilia, led to his resignation, although the pope rejected his resignation. However, he allowed the religious to withdraw from the first line and, at the end of June, he appointed Bishop Emeritus Michel Dubost as apostolic administrator of the Archdiocese of Lyon.

After this and other cases, the Conference of Bishops of France announced at the end of last year the creation of an independent commission that will investigate cases of pedophilia in the heart of the French Church since 1950. The commission, made up of a score of experts from various fields, began in June to collect testimonies and hopes to be able to present a report within a maximum period of two years.