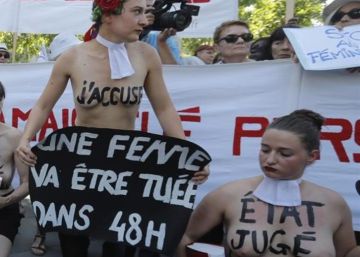 A thousand women, and also men, took to the streets this Saturday in Paris to demand, under a simple slogan, "Protect them!", "Concrete and immediate" measures against sexist violence, which is charged each year in France the lives of more than a hundred women. The claims were addressed directly to the Government of Emmanuel Macron. The French leader has declared equality between women and men as the "great national cause" of his mandate. promotes, as president of the G7 this year, the "feminist diplomacy"But his executive has not implemented drastic measures to lower the rate of violence against women, according to feminist organizations and numerous politicians who have hardened the tone against the Elysee in recent days.

"Femicide is not a fatality, we can avoid it. Mr. President, we have no more time, we are waiting for an answer now, "said the feminist militant Caroline de Haas, from the Nous Toutes movement (All of Us). The mobilization this Saturday, organized by relatives of victims of feminicide, had the support of numerous feminist organizations. Especially since it was known that, in the first six months of the year, 70 women have died from sexist violence in France.

In these first days of July, the list of femicides has continued to increase, to the point that some banners of the demonstration, which denounced 73 sexist murders, had become outdated: the victim 74 was murdered, according to French media, night from Friday to Saturday in the south of France, where a man was arrested after stabbing his partner before the children of this. The dizzying figures threaten to mark this 2019 as especially black in terms of sexist violence in a country where, on average, a woman dies murdered by her partner every three days.

"We do not retreat, but we do not move forward either," lamented Isabelle Sobreviela, one of the protesters for whom the proposed measures in the first two years of Macron are no more than "measured" and not impact policies. Criticisms and demands for greater action by the Government have multiplied this last week, in which several newspapers have put on the front page the problem of feminicide.

On Friday, more than 150 senators and senators signed a rostrum in the newspaper Libération demanding the implementation, once and for all, of the promised use of electronic bracelets, as well as the creation of more emergency accommodation places for victims of sexist violence, the deployment of "specialized" judges, police and gendarmes throughout the country and a greater economic support to associations that fight on the ground against sexist violence.

A day before, in another column, this time in Le Monde, a collective of well-known feminists, artists and journalists also denounced the "silence" of Macron in the face of male violence and listed several measures that, in his opinion, the Government can decide "before the summer holidays." The aim is to threaten "sanctions" against agents who refuse to register complaints of sexist violence or to set "departmental orders objectives" by departments. While Spain, the great French reference in the fight against sexist violence, attributes more than 20,000 orders of removal each year, France only approves about 1,300. The signatories also demand more places in the shelters for victims of sexist violence and a "systematic screening plan for gender violence" in hospitals.

"Mr. President, you know that your public word causes changes. But you are staying very silent. We need you: talk about this issue, "the signatories urge, among others Caroline de Haas, the journalist and director Rokhaya Diallo or one of the founders of Femen, Inna Shevchenko.

The "alarming" high number of femicides also worries the High Council for Equality (HCE, for its acronym in French), an independent consulting body that advises the office of the French prime minister. The HCE presented this week "voluntarily" to initiate an "official mission" to investigate the failures that may exist in the existing procedures to denounce sexist violence and achieve protection from responsible bodies. A petition initiated by actress Eva Darlan and a judge, Luc Fremiot, on the Change.org platform to demand, precisely, to identify the "failures" in the reporting system that have led to the deaths of more than 70 women. hands of their partners or ex-partners so far this year, was already close to 7,000 signatures.

In the face of criticism, the French Government has defended itself remembering these days lmeasures approved in the last two years, as an Internet platform to facilitate complaints of domestic violence, awareness campaigns or increased funds for institutions responsible for serving women. "The government acts, but we must go even further," acknowledged the Secretary of State for Equality, Marlène Schiappa, who, however, has not revealed any new preventive or punitive measures.