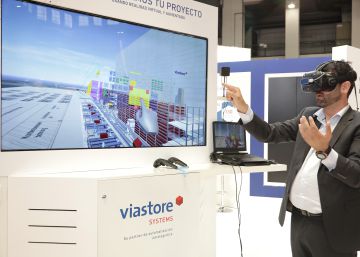 “We are not so interested in going to earn money as being there to promote the Barcelona brand and the brand Free Zone Consortium (CZF)“Pere Navarro, special delegate of the State in the CZF, thus describes why a public body, participated by the Ministry of Economy and the City Council of Barcelona, ​​has decided to make the leap and take its activity to the other side of the Atlantic. The next October, for the first time, will export its S to ColombiaInternational Logistics alon (SIL). It will be organized in the city of Barranquilla with Corferias, a Colombian listed company that has become the main fair operator in Central America.

The success of SIL comes after 22 editions installed in Barcelona and after last year also concentrated the celebration ofl eDelivery room (specialized in the distribution of the so-called last mile) and the World Congress of Free Zones, among other events, which allowed the gathering of more than 700 companies in the Catalan capital. The show has become a benchmark for the sector in southern Europe, dragged by the rise of world trade and the boom in electronic commerce in recent years, which has generated new rooms such as eDelivery. And, although it has focused especially on the Mediterranean area, in recent years it has taken advantage of the door that Spain represents in Latin America to strengthen relations.

In fact, Navarro emphasizes that the closing of the agreement has been possible thanks to the contacts that, for years, the consortium has established with the Latin American business world and, in the case of the next SIL Americas, underlines the efforts made by its predecessor in the charge, Jordi Cornet.

SIL is not the only product in its catalog that the Barcelona consortium wants to take beyond the Catalan capital. His negotiations in Colombia have also extended to the Ministry of Commerce, Industry and Tourism of the country, with which he has negotiated the possibility that Bogotá will install another initiative launched in Barcelona in 2019, the 3D Factory Incubator, the first incubator European high-tech manufacturing by addition, a process also called three-dimensional printing.

The project, for which an investment of 100 million euros is calculated, plans to accompany new projects that are committed to this technology in different economic fields. “For us it is an opportunity because it allows new companies to grow with a technology with a lot of projection and for them it is also interesting because all administrations are looking for the industry of the future,” explains Navarro.

A representation of the consortium also visited New York last year and detected how 3D printing is one of the focuses on which the New Lab of the city was centered – an old US Navy shipyard that houses technology companies -, with a concept very similar to the one that the Spanish organization wants to develop.

The entity that directs Pere Navarro has turned its history in recent decades. Created in 1916, it was the first public entity of economic revitalization created in Spain and its first task was the start-up of the Zona Franca industrial estate, where Seat began to operate and where around 150 companies are currently established. But the consortium has changed the way it operates and now goes beyond mere industrial land management. He has promoted custom made buildings for companies and organizations in Barcelona and has used his land for the implementation of a new industry. Its turnover reached in 2018 (last available year) 52 million euros, obtaining a net profit of almost half: 25.6 million.