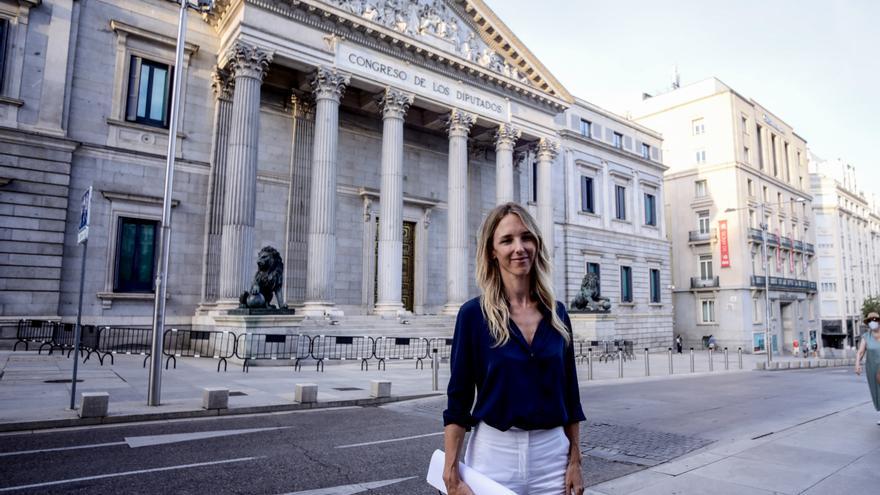 The association Free and Equal has announced this Tuesday that it will pay for the appeal of the PP exporter in Congress Cayetana Álvarez de Toledo before the Constitutional Court so that the accusation of “is incorporated into the daily sessions of the Congress of Deputies on May 27. terrorist “that the popular leader launched against the father of the second vice president of the Government, Pablo Iglesias. As Álvarez de Toledo himself revealed in August, when he announced his dismissal as spokesperson, the PP did not want to pay for that resource.

Now, Libres e Iguales, an association founded by Álvarez de Toledo herself, considers that the expression “son of a terrorist”, referring to Pablo Iglesias, “is true and the truth does not violate parliamentary decorum.”

On May 27, the then parliamentary spokesperson of the Popular Party, Cayetana Álvarez de Toledo, spoke these words in the Congress of Deputies, in the course of an interpellation to the second vice president of the Government, Pablo Iglesias:

“And one more thing to finish. We are going to talk about this about the aristocracy. You have referred to my title of marquise, the social class, the aristocracy, over and over again, in short, right? As you know the children we are not responsible for our parents, not even parents are fully responsible for what our children will be. That is why I am going to tell you for the first and last time. You are the son of a terrorist. You belong to that aristocracy you, to the political crime. ”

Next, the president of the Congress, Meritxell Batet, announced that she would withdraw these words from the journal of sessions. In fact, the text includes a footnote that says: “Words withdrawn by the President in accordance with article 104.3 of the House Rules”.

Free and Equal believes that “the president of Congress tried in vain to get the deputy to withdraw those words and then had them transcribed in the manner described.” “Even in italics and bracketed, these words appear in the Session Diary. In the audiovisual files of the session they are recorded as they were pronounced, without any other preservative. And they were words repeated ad nauseam in the media. So that the objective of the deputy could not be, nor is it now, the protection of the content of her message, “says the organization.

The basis of his appeal “is that an objective fact, verifiable and even proudly assumed by father and son cannot be branded as an opinion that affects parliamentary decorum.” Free and Equal believes that “this foundation is linked to a deeper one: when a shameful fact acquires the status of opinionable, the way is paved towards its definitive erasure from History. Denialism, no more”.

“In the decision of the president of the Congress, the conviction that in Franco’s Spain the terrorists ceased to be terrorists, as long as, naturally, they did not militate in the Spanish Basque Battalion,” he adds. The association denounces that “from the outset the leadership of the Popular Party reluctantly welcomed these words from its spokesperson and, especially, the possibility that a legal dispute might be established over it. Until a few weeks ago the party told it that it was not going to assume the cost of the resource “.

Therefore, Free and Equal has decided to do it, “given its moral and political value.” “[El Reglamento del Congreso] it can never allow the censorship of purely truthful and objective expressions referring to a matter of public relevance. The truth about a matter of this nature is simply that: a truth, “he says in the appeal.

“For this reason, it can never be offensive to decorum, but rather it is a reflection of a fact about a matter of public importance that citizens have the right to know. […] The unusual request of the Presidency of Congress to the deputy to withdraw and the subsequent censorship of an expression that reflected an objective and verified truth, would allow to bring up the eppur si muove attributed to Galileo, after being forced to retract a true fact ” .

Libre e Iguales recalls, however, that appealing for protection to the Constitutional Court “is not exactly cheap and the price of the appeal is 15,730 euros.” “Therefore, and regardless of the use of their own money, Free and Equal, at the initiative of one of its members, Santiago González, has decided to open a collection, modernly called crowdfunding, to help pay for it.”

Among the members of Libres e Iguales are the writer Félix de Azúa, the playwright Albert Boadella, the journalists Arcadi Espada and Federico Jiménez Losantos, the former president of the Community of Madrid Joaquín Leguina, or the writers Fernando Savater or Mario Vargas Llosa, among others.