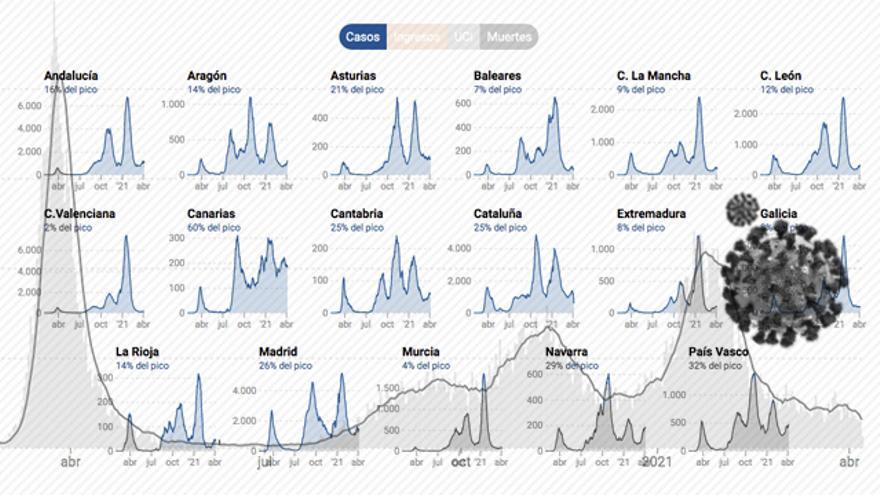 The coronavirus has never advanced homogeneously through Spain. In March 2020 it was even at four speeds: In what is considered the worst of the pandemic, there were communities that detected community transmission very early and others that, due to the general closure, barely counted cases. Madrid has always led, in the three waves, some of the worst data, but in summer Aragon and Catalunya were the outpost of the second. The last few weeks have not all followed the same rhythm, and therefore not all begin the incipient fourth starting from the same position.

The Valencian Community has achieved the goal set by the Ministry of Health for all: to be below 50 cases of COVID-19 per 100,000 inhabitants every 14 days. For days it has been counting around 34. Murcia, Galicia and the Balearic Islands have remained close, with incidents of 67, 67 and 64 respectively. At the other extreme is Navarra, with about 380; Madrid, 315; Euskadi, 290; and the two autonomous cities of Ceuta and Melilla, 433 and 482. All of these are above the extreme risk set by the semaphore of the Ministry of Health. All the other communities begin the fourth wave reporting between 100 and 200 cases per 100,000 inhabitants, a risk between medium-high and high.

Why so much diversity? Pere Godoy, former president of the Spanish Epidemiology Society, responds first: “We continue to analyze many things about the virus, but others are becoming clearer. And there are no great secrets. In Portugal they have managed to be so low after 2 or 3 months of a very drastic reduction in social contacts. That, and continuing with all the distance measures, masks and hygiene, is the only key. ” Godoy adds on the most successful case, that of Valencia, that there have been “very high restrictions”; with hotels closed for much of the winter, shops closing at 6:00 p.m., curfew at 10:00 p.m., and not even family members were allowed to open during Christmas. “And now they are de-escalation quite prudently, without opening happily,” continues Godoy, head of surveillance in Lleida. “We still have to mentalize ourselves: there is a very high percentage of transmission from mainly presymptomatic cases. It is only stopped by reducing social contact.”

Mario Fontán, former president of the MIR platform for Preventive Medicine, maintains something similar. “The measures are a relevant factor, but the impact of each factor cannot yet be discerned,” he explains. In other words, first of all, we must take into account “the intensity of the restrictions: advance the curfew or limit the places where contacts can be made, also favor telework. Extremadura and Valencia had very high levels but they fell relatively quickly; Madrid, not so restrictive, has slowed down. ”

But in addition to that, there are “structural factors”. Among them, “how the tracking system works, how it is organized,” Fontán lists. Also “when have the measures been implemented”. And sentence: “the sooner the better”. Also the “social organization, because there are communities that receive, for work, more people from outside than others; and others, like Madrid, in which there is a high density of people and much more inequality and overcrowding, an engine of contagion”.

And of course, “factors that we still do not know can affect the epidemic wave.” In the end, Fontán sums up: “The question is not how the third wave came out in one way or another, but rather that the question encompasses the entire pandemic,” in the future it will be necessary to study “the structural and system factors they had. weight when it comes to taking the pandemic from one place to another. “

Fontán and Godoy agree that some territories have been able to enter a kind of loop. They have never gotten to lower the incidence to the desired levels, and therefore they have always started from a bad incidence when a new wave has started, and started again. It is exactly the risk, they continue, of a rapid de-escalation. The benefits of getting a very low floor are seen in the Valencian Community. Ildefonso Hernández, spokesperson for the Spanish Public Health Society and director of the area at the Miguel Hernández University, in Elche, highlights them: “I am aware that here, for weeks, the transmission chains can be followed. that so much was talked about during de-escalation. Doing it backwards, detecting who has infected whom and even screening for outbreaks in the field of occupational health, with asymptomatic patients. With low prevalence is how they can be managed “. In the Spanish Society of Epidemiology, they also place approximately 50 cases per 100,000 inhabitants, the barrier from which this mechanism becomes very complicated.

Euskadi is the opposite example and where several of the factors that the experts have listed converge. It reaches the fourth wave with around 290 incidence, almost like Madrid, where at no time have bars been closed. In the Basque Country, yes, by municipalities according to incidence and for a short period of time as a general measure that a judge knocked down, but “response actions with high thresholds have been applied. The interior of the hotel industry was closed for many months after 500 incidence, currently it is at 400”, explains Adrián Aginagalde, director of the Public Health Observatory of Cantabria and researcher at the Basque Museum of the History of Medicine and Science. In other communities, And as the Health traffic light currently establishes, it is from 150.

But it is not only that, but sociodemographic factors come into play, as the other experts expressed. “First of all, there is a demographic macrocephaly in the big cities,” Aginagalde continues. But above all “Gipuzkoa is a continuum of transmission of the French Basque Country. What happens there, is transferred; although politically it is not, sociodemographically they are connected and the incidence of one place has influenced the other”. The same happens in the extension with Navarra and La Rioja, the first also with a very high rate and the second better resisting the fourth wave, but badly in many moments of the pandemic. “It is to be expected and it also happens with the flu: everything starts in Gipuzkoa and goes down to Vizkaya, Álava and Navarra. A common pattern for respiratory diseases”.

The incidence rate drops to 180 cases after adding 4,941 new infections and 205 deaths