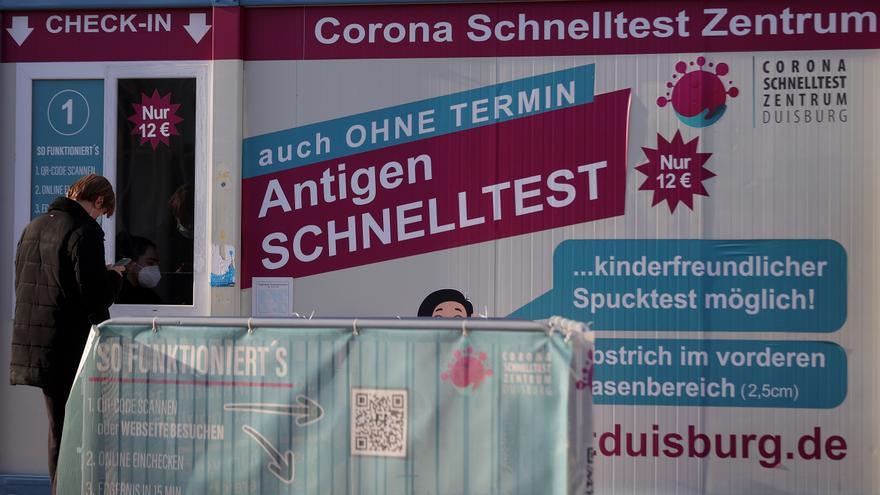 The tremendous increase in positive cases of coronavirus in Germany this fall and the international crisis of components are holding back the German economy. The shadow of inflation, estimated at 6% for this month of November by the Bundesbank, the German central bank, also worries in the biggest economy of the European Union.

Considered the economic engine of Europe, the German economy these days figures as that of a “laggard” country. This is at least the description of the country of Angela Merkel in the british newspaper Financial times some days ago.

In Germany they are well aware of the delay in recovery after the 2020 economic stoppage imposed by the fight against the COVID-19 virus. “We all thought that by the end of 2021 and the beginning of 2022 we were going to be growing at the level prior to the crisis and this is no longer going to happen,” Hubertus Bardt, head of studies at the Institute for the German Economy ( IW, for its German acronym), a center dedicated to economic analysis based in Cologne.

Thus, for example, the German Council of Economic Experts, an advisory body to the German government, has lowered the country’s growth forecasts this year to 2.7%, when before it saw the economy growing by 3.1%. The German Council of Economic Experts understands that the economy, in the last quarter of the year, will grow by just 0.4%, far behind the 1.2% estimated to grow, on average, the euro zone. Hence the image of “laggard” of which the Financial times.

The German government itself, now led by Angela Merkel, has also had to correct its growth forecasts. From the 3.5% that the Executive said that the German economy would grow in 2021, a growth of 2.6% has been estimated for this year.

The German economy is particularly burdened by the components crisis affecting key industrial sectors in the country, such as the automotive industry. However, now there is another aspect to consider: COVID-19. Germany is breaking records for daily infections. This week, it exceeded 100,000 deaths from the new infectious agent and, as a result, restrictions have returned.

There are already regions – those with higher incidences – in which it has been decided that there are no Christmas markets or that, for example, bars and discos are closed. Curfews have also returned in areas of the country considered “hot spots” for the transmission of the virus. Throughout the country, a “confinement for the unvaccinated” has been implemented, which basically consists of preventing the entry of non-immunized people into interiors where services are provided.

Bavaria, Saxony and Thuringia, in the south and southeast of the country, are the regions most affected by these restrictions, which will not be exempt from economic effects, according to Bardt, the IW expert. “The fourth wave and the new rules against the spread of the virus are going to have an effect on event organizers, gastronomy, hospitality and, in general, this will weigh on the economic environment, something that affects consumption and investments, “says Bardt. “This will make the crisis last longer than expected,” says this expert.

The long shadow of inflation is feared

But that’s not all observers like Bardt are concerned about today. Rising inflation has long been making headlines in Germany. When back in July the Federal Statistical Office published that prices had risen 3.8%, it was already pointed out that, since 1996, the rise in inflation had never been so pronounced.

That he Bundesbank forecast 6% inflation for this month of November, after it stood at 4.5% in October and 4.1% in September, leads to the concern of not a few economists. Volker Wieland, a member of the German Council of Economic Experts, has raised his voice so that measures are taken from the European Central Bank.

As Wieland told the economic newspaper Handelsblatt“If we continue in the long term with high levels of inflation, this will be due to monetary policy, which in the euro zone is very relaxed.” The current values ​​of inflation in Germany have not been seen in decades, something that also encourages us to think here that prices, if they continue like this, “may become a problem”, according to statements collected by the Handelsblatt by Marcel Fratzscher, head of the German Institute for Economic Research (DIW).

Bardt, the head of the IW, also gives an account of this concern. “Inflation is a worrying indicator in Germany. In my opinion, it will go down somewhat, but it will still be there,” says Bardt. “This is mainly due to the rise in oil prices, the price of emissions at gas stations and the VAT rise registered in January because for months in 2020 this tax was lowered in Germany, and its rise in 2021 to the level at which was contributing to the rise in prices “, this expert abounds.

Ultimately, Bardt alludes to economic measures to encourage consumption taken during 2020. The rise in inflation also results from these policies and that is why, in his opinion, we are at a time when prices in Germany are being compensated . In any case, he understands that “we are not in an upward spiral of inflation.”

However, this economist wonders what will be the response to the rise in prices in the remuneration policy of the economy. This may be decisive for the future performance of the German economy. At the moment, for Bardt there is a partial response in the semaphore coalition contract (SPD, the Greens and liberals of the FDP) that the social democrat Olaf Scholz wants to lead. In that text, presented on Wednesday of this week, there is a sudden rise in the minimum wage to 12 euros per hour. Currently working hour is paid in Germany at least 9.60 euros.