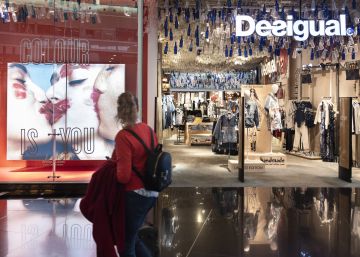 From the founder of the fashion brand Unequal, Thomas Meyer, very few things are known. Since he created the company in 1984 in Barcelona, ​​this Swiss based in the Catalan capital has proven very jealous of his privacy: has barely appeared in the media, and had never offered a press conference. In a meeting without photographers, Meyer on Wednesday broke a long silence to make self-criticism and publicize the transformation in which the brand is immersed: new logo, new products and a restructuring of the store network. With all this, it intends to tackle the fall in sales, which already adds four years in a row and will affect the year 2019 again: Meyer has advanced that the results, pending auditing, will record a drop of about 10% of the turnover.

The transformation that the brand has undertaken was obligatory. Aupada to the podium of the big fashion companies in Spain after almost three decades of uninterrupted growth – in 2014 it reached a turnover of 963.5 million euros – Desigual began to lose customers and registered a sharp decline in sales. In 2018, the latest available results, the company invoiced 654.6 million euros, 14% less than in 2017, and in the previous three years, the cumulative fall was 27%. At this time the company has not entered red numbers, but has reduced the profits from 130 million in 2014 to 3.3 in 2018. The results of 2019 will not be known until the next few months, but, despite the fact that the CEO of The firm, Alberto Ojinaga, had announced a change in trend, Meyer has already anticipated that the turnover will close at around 600 million euros. “We are where we have to be. For us now growth is not as important as transformation, to be relevant again, ”he said.

The founder decided to lead this transformation alone and with decisions that turn the brand around. Also literally, as seen in the new logo, the word Desigual written backwards. After entering the Eurazeo investment fund in 2014, Meyer bought again, in 2018, 10% of the shares. Eurazeo recovered 141.9 million of the 285 he had invested and Meyer was once again the sole shareholder. He did it, as he has revealed, with the aim of gaining agility in the decisions that the company’s advice had to take in view of his economic situation. “We are in a special, creatively difficult time, and it is an opportunity. We needed to make quick decisions and agility, ”said Meyer.

Meyer does not foresee or give entry to another partner or go public in the short term: “We are sufficiently capitalized.” And it is not in the company’s plans, which “practically never” has assumed debt, begin to leverage. The transformation will be carried out only with our own resources: “We have enough to face the necessary investments in the coming years”, clarifies the founder.

The transformation is taking place in the logo, the stores and the product. “Desigual has to change, become relevant again, innovate, but at the same time it has to remain unequal. And we have to reorder: close where we shouldn’t be, and open where there are opportunities, ”Meyer summed up. The conversion involves more innovation in the product, collaborations with artists to attract new younger customers – “the target ideal is in the 40-year-old client, but our regular audience is 47 or 48 years old ”- a new brand and restructuring the distribution channels. In 2019, more than 40 stores were closed worldwide and 15 were opened. This year’s investment to remodel between 90 and 100 of the existing stores (out of a total of 500) is 30 million euros, and the effort will continue until the entire network is renewed within three years. Meyer has also identified international markets in which it is necessary to grow, starting with Japan, which is already its fifth market, and following the Latin American countries.

“The Desigual brand makes more sense than ever: people want relevance, experience, fashion with purpose and meaning,” defends the founder in a context, that of fashion, “which is difficult because of changes in consumers, in companies, and in electronic commerce ”. The online segment already represents for Desigual 14% of sales, and rises in each year.

Meyer sees, in the situation in which the company is, a logic that responds to the history of the company. “I come from the world of recycling, the circular economy and transformation,” explains the founder. The company was born in the eighties when Meyer, who lived between Barcelona and Ibiza, where he sold t-shirts and had second-hand stores, met a stock of 3,000 cowboys who could not get out. From these pants he made the iconic denim jacket with which he began his successful career. The founder acknowledges that during the years of great growth they were confident, and things “were not made perfect: the central thing we have done wrong is not to bring innovation every year, there has been a minor connection with the market.” And he excuses himself for not giving explanations: “I’ve never wanted to be a public person. Now Desigual has something to tell, and I wanted to tell it. ”