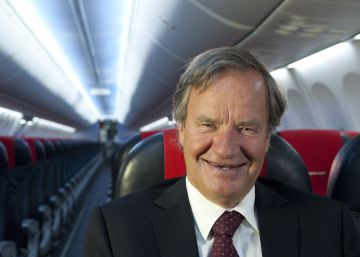 After 17 years at the helm, the founder and CEO of Norwegian, Bjørn Kjos, has decided to abandon his positions and assign his responsibilities as the company's top executive. The decision is made after the bad results that Norwegian has presented, which in the first half of the year recorded losses of 1,406.6 million Norwegian crowns (145.8 million euros) in the first half of the year, compared to the profit of 254 million crowns (26.3 million euros) that obtained in the same period of 2018, according to the company on Thursday.

On an interim basis, and as long as the company does not appoint a new CEO, the CFO (and deputy CEO), Geir Karlsen, will fill the position. Bjørn Kjos, 72, will remain as an adviser to the airline. During his tenure as CEO, the company has gone from being a small domestic operation with 130 employees and four aircraft to a low-cost airline with more than 11,000 employees and 162 aircraft.

However, his firm commitment to low-cost long-haul flights led to a rapid expansion that has increased the debt causing serious financial and solvency problems, which have been reflected in a stock market crash. Capitalization is now one fifth that three years ago, and not even IAG's attempts to launch a takeover bid on the airline They have managed to revitalize the action. Due to this, the airline is immersed in a patchwork of flights, with the sale of aircraft, cancellation of less profitable routes and closing of bases in Spain, Italy and the United States.

Bad results of the semester

During the first semester, Norwegian registered a negative net operating result (Ebit) of NOK 835.8 million (€ 86.6 million), a figure that improves by 60% the negative Ebit that the airline registered in the first semester of 2018. In the second quarter, the company recorded a net profit of NOK 82.8 million (8.5 million euros), 72% less than in the same quarter of 2018.

Suspension of the Boeing 737 MAX

The suspension of the Boeing 737 MAX, from which Norwegian was to receive 12 aircraft, has negatively affected demand as well as operating costs and production. The airline expects the negative impact on the 2019 results to be approximately 700 million crowns (72 million euros).

Norwegian transported 14.62 million passengers until May, which represents an increase of 4.8% over the same period of 2018, with an average occupancy of 83.2%. In May, the airline, whose punctuality index improved for the ninth month in a row, transported 3.36 million passengers, with a decrease of 2% compared to the same month of 2018 and an average occupancy of 86.1%.

The unit income for May shot up by 7%. Likewise, the punctuality index increased by 3.7 percentage points and stood at 81%. Despite the suspension of MAX operations, Norwegian operated 99.3% of all flights scheduled for May, 0.1 percentage points more than in the same month of the previous year. In the twelve inter-annual months (from June 2018 to May 2019), the company transported 38.01 million passengers, 9% more, with an average occupation of 85.2%.