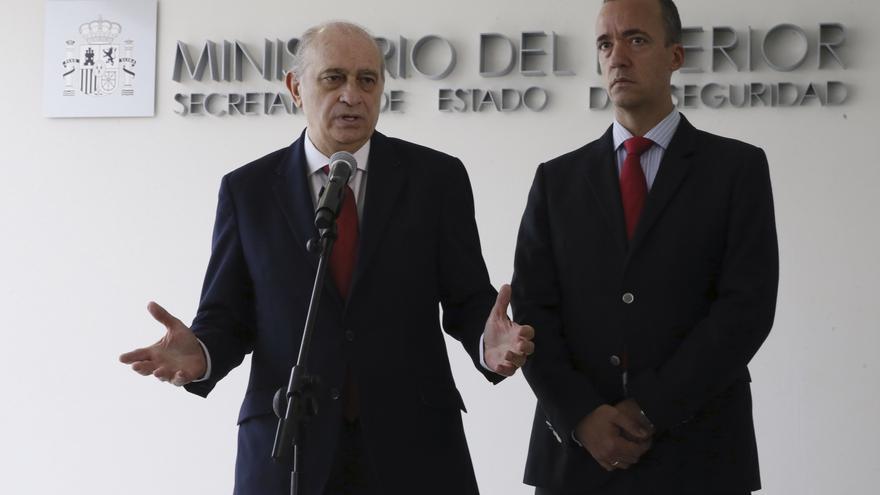 Proof that Interior Minister Jorge Fernández Díaz knew about Luis Bárcenas’ espionage operation has been in the hands of a notary since the summer of 2019. Francisco Martínez, former Secretary of State for Security, deposited four exchanged messages at a Madrid notary’s office from his official telephone number with who was his boss at the time, Fernández Díaz, about the surveillance and monitoring operation of the surroundings of Bárcenas during the summer and autumn of 2013, initiated as a result of the former treasurer entering jail and confessing the irregular financing of the Popular Party, inform eldiario.es case sources.

Those notarial deeds with the mobile messages were delivered by Martínez to the agents of the Internal Affairs Unit who came to his home on March 14 to dump his current telephone number, among other material seized. The subsequent analysis of these evidences has confirmed the suspicions about the involvement of the Minister of the Interior and person of the highest confidence of Mariano Rajoy in Operation Kitchen, a police maneuver intended, according to the investigators, to sabotage the judicial investigation of box B of the PP.

One of the messages deposited before a notary and that appear in the case would show, according to the sources consulted, that it was Fernández Díaz who made his Secretary of State for Security aware of the existence of a police device that included the infiltration of a mole in the environment from Bárcenas and who turned out to be the family chauffeur, Sergio Ríos Esgueva, today National Police. In the same message, the Interior Minister would have asked Martínez to supervise the operation.

Last Friday, eldiario.es revealed that the Anticorruption Prosecutor’s Office has asked the judge in the Villarejo case to impute of Fernández Díaz and the former minister and former secretary general of the Popular Party, María Dolores de Cospedal, in the piece investigating the aforementioned Operation Kitchen. The prosecutors in the case also want the husband of María Dolores de Cospedal, Ignacio López del Hierro, to testify as investigated.

These messages were delivered to the notary between June and July 2019, after Fernández Díaz tried to distance himself from the information that involved Francisco Martínez in Operation Kitchen. To questions from Vozpopuli On June 11, 2019, the former Minister of the Interior said of the aforementioned operation: “I don’t know for anything. I’m finding out now “.

Commissioner Enrique García Castaño, also investigated in the case, had declared before the judge that the Secretary of State for Security Francisco Martínez was promptly informed of the investigation to the Bárcenas family, of which neither the judge of box B, Pablo Ruz Not even the police officers who worked under him were aware, according to legal sources. He even said that he had bought a laptop for use by the Secretary of State in which the advances of Operation Kitchen, among others, were incorporated. García Castaño defended that the operation in which he participated was destined to discover Bárcenas’ front men and where he was hiding the money and denied that it was an illegal operation.

After the summer, in October, Fernández Díaz published his memoir and lavished on public statements. On the day of the presentation, he referred to Martínez with some words that the media interpreted as supportive of his number two. “If the presumption of innocence is general for every citizen, for Francisco Martínez I have it absolute and total (…) I have the absolute conviction that everything he did was done within the law,” he assured the press.

But Fernández Díaz added a coda to that statement: “Another thing is to be wrong or not, which is part of the human condition. One thing is to be wrong and another thing is another thing, and of those other things I, by Francisco Martínez, unless the opposite is proven, I have no doubt ”. In the presentation he was accompanied by the former president of the Government Mariano Rajoy, a personal friend of the former minister, and María Dolores de Cospedal, among other leaders of the PP.

Imputation of the entire political brigade

Piece 7 of the Villarejo case, which is investigating Operation Kitchen — waiting for the judge to resolve the situation of Fernández Díaz, Cospedal and López del Hierro— to former Secretary of State for Security Francisco Martínez; the former Deputy Director of Police Operations and architect of the political brigade, Eugenio Pino; already all the first line of police command that participated in the maneuvers against the opposition, either in Operation Catalunya or Podemos.

Martínez is awaiting the lifting of the secrecy of the summary to testify after having availed himself of his right not to do so on the first two occasions. The first, he explained, he did so on the advice of his lawyer when he did not know the facts that were charged. And the second, after having previously requested that he be exempted from his obligation to keep secret on reserved matter and while it was not clear about what he could or could not talk about about his passage through the Ministry of the Interior without incurring a crime. In a statement after his indictment, Martínez admitted that he could have made mistakes in his performance in the Interior, but that he had always acted “with absolute respect for the law.”