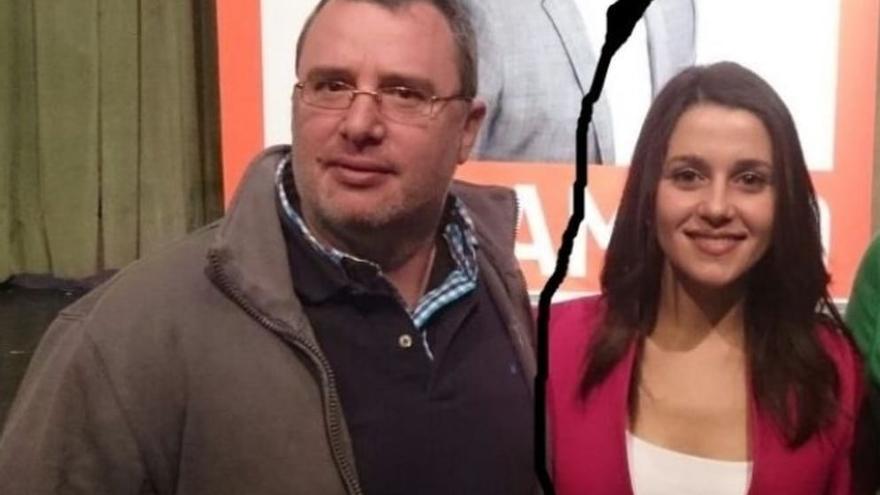 Enrique Echazarra joined Ciudadanos La Rioja, his native land, in 2014, when the formation founded by Albert Rivera was still in the process of gestation in that community. In these six years more than half of them have been litigating and fighting against what is still their party, from which they were expelled and readmitted less than a year ago by final judicial ruling.

“I joined Ciudadanos with great enthusiasm because I believed in political regeneration and the participation of the affiliation, and because I had confidence in all levels of the party,” says Echazarra. The initial group that embarked on the new adventure was very small but it grew until it formed a group that was in charge of greasing the machinery for the regional and municipal elections, which were about to fall. With time Echazarra became a member of the regional Board of Directors.

His misfortune began when in 2016 he was accused of sending other colleagues from his computer documentation with data on the membership census, which according to the national leadership violated the principles of “confidentiality.” He denied the accusations and considered those motives as “an excuse” to get him out of the way in retaliation for the complaints he had been making about various internal irregularities that he appreciated within the formation. That accusation led to the opening of a disciplinary file by order of the national leadership -which was then directed by Rivera-, which in the end ended in expulsion.

Those were years, Echazarra remembers, in which not a single leaf moved without the approval of the all-powerful former Secretary of Organization, Fran Hervías, nicknamed Mr. Wolf, as the character of Pulp Fiction, for being in charge of the ‘cleaning’ of the party. El Hierro control that Hervías exercised internally helped to gradually expand Ciudadanos throughout the national territory, creating groups without rest, in which Rivera’s number three was placing a whole network of faithful who kept him abreast of everything in they cooked.

While Echazarra’s expulsion proceedings continued, the La Rioja Board of Directors denounced by letter to the Guarantees Committee and the National Executive that in January 2017 the territorial delegate and councilor of the party, María Luisa, had been hired as administrative assistant Alonso, with funds from the public subsidy received by the municipal group of the City Council of Logroño, something that the Law of Bases of Local Regime prohibits. Far from investigating the matter, the response of the national leadership was to dismiss them all en bloc with the excuse that a “restructuring” had to be undertaken in the groups.

The case ended up being involuntarily uncovered by Alonso herself, who accredited these practices before a large group of affiliates and party officials during an internal assembly held in full controversy over her case. Her intervention at that meeting was recorded, and was published by various regional media. Eldiario.es reproduced another of the internal conversations in which it was accredited that the members of the regional directorate gave Alonso the complaint about his salary sent to the National Executive and the Guarantee Committee.

In that convulsed assembly Alonso directed the blame to the national leadership, revealing that the practice of these payments was to “all organic positions”: “There is a directive of the party, which is not only for La Rioja, but for all of Spain … …. The intention is to download the party’s accounts from the organic charges in order to have more money for the campaign [electoral]”, assured Alonso, noting, in addition, that the orders came” from Barcelona “where Ciudadanos then had its headquarters and the National Executive Committee met.

As denounced by the defenestrated ex-leaders of La Rioja, also in the Basque Country the party paid a salary – “for tasks that were never clarified,” says Echazarra – with funds from the parliamentary group to the then spokesman and candidate for Lehendakari, Nicolás de Miguel, who after his resounding failure in the autonomous regions ended up emigrating to Torremolinos (Malaga) where in the last local elections he managed to be elected councilor. Five months later, however, De Miguel – who began his political career in the IU and later militated in the UPyD – left Ciudadanos and went with his act to the group of ‘non-affiliated’ from where he now supports the municipal councilor, the PSOE, that has awarded him with the area of ​​Equality.

With all that data in your possession – including the recordings -, Echazarra decides in January 2017 to file a complaint before a court in Logroño for an alleged crime of embezzlement of public funds against Maria Luisa Alonso and Julián San Martín For those who ask for 4 years in prison and 10 years of disqualification from holding public office. The investigating judge opened proceedings and even took statements from several of Echazarra’s colleagues from the La Rioja Regional Board of Directors; the inspector of the City Council, who was the one who warned Citizens’ spokesman, Julián San Martín, that paying with group funds violated the Law on the Bases of the Local Regime; and to the treasurer of the municipal group. Echazarra also asked for a confrontation – which was never carried out – between Alonso and Fran Hervías, who has survived the Rivera era after passing through the Citizens’ manager as Secretary of the Organization – despite having previously resigned from the same position – and He is currently a senator by appointment of the Andalusian Parliament.

In the letter of his complaint, Echazarra provided the contract that San Martín himself made to the territorial delegate for a salary of 16,324.68 euros per year, which added to the social security contributions of 6,189.36 euros per year – a figure that is not plasma in the contract – amounted to a total of 22,514 euros also annually. That is to say, that in the four years that her mandate would have lasted, Alonso would have deposited a total of about 90,000 euros in her account.

In view of the consequences that these practices could have at the national level, Fran Hervías had already rushed to acknowledge the irregular payment, which he attributed to “an administrative error.” To stop the scandal, the party’s national leadership ordered to rescind the economic agreement and immediately reinstate the four payrolls paid to Alonso until then, which did not reach 8,000 euros, in addition to another 21,035 euros of the group’s allocation. of 2015 that they did not get to spend.

Faced with these facts, the judge decided to file Echazarra’s complaint, accepting that it was all due to “an involuntary error” by the councilors who were unaware of the functioning of the Administration. In its order of resolution, it also took into account the fact that the party returned the money improperly used to the municipal coffers. Echazarra did not throw in the towel and appealed the decision before the provincial court of Logroño.

Meanwhile, the ex-leader from La Rioja saw his first joy come to him: after nearly three years fighting through civilian channels against his expulsion, in April 2019 the Hearing of Logroño determined in final judgment his readmission as a member of Ciudadanos. This encouraged him to continue with the criminal complaint against the regional leadership for practices that he considers “corrupt” and that had he not denounced them, he is convinced that they would have continued. “The crime is still there even if they returned the money and Alonso herself acknowledges that it has been done throughout Spain,” recalls the former La Riojan leader of Ciudadanos.

The second joy came to him last July after seeing that the same Provincial Court of Logroño decided to reactivate its cause against Citizens. However, the judge warned her in her new order that there was a “formal defect” in the process and she could not appear in the case as a private complainant but as a “popular accusation” as it was an alleged crime of embezzlement of public funds that affects the Administration.

Appearing as a popular accusation means Echazarra has to post a bond of 3,000 euros -which would be returned in case of winning-, plus another 3,500 for the payment of the lawyer and the attorney. If you do not comply with these requirements before August 31 – the term that the court has imposed – the lawsuit will decline. “I do not have that money. The judicial processes and the resources that I have presented all these years have left me without money”, recognizes the ex-Riojan leader of Ciudadanos who a few days ago received the call from Enrique Martínez Herrera, a citizen resident in Barcelona who knows about his case, which offered to help him launch a crownfoundig in order to try to collect those 6,500 euros of court costs.

In conversation with eldiario.es, the promoter of the page assures that the only interest that moves him is “to end political corruption, whatever party comes.” “In Spain a curious phenomenon occurs: the one who denounces the crime is the one who is punished and the one who suffers reprisals, while the corruption of the parties continues to rampage. We must help the complainants,” he says. “That they return the money is not enough. What they have done should be punished because if Echazarra had not denounced it, they would surely have continued with what, in my opinion, and according to Alonso’s own statements, would be three crimes: embezzlement of public funds; illegal financing, and illegal electoral financing “, ditch.

Echazarra, for his part, will wait these days to see what happens although he does not hide his concern because the collection progresses very slowly. At 51 years old, this specialist electrical technician assures that he is not going to throw in the towel. “I never give up. I am a natural fighter and I fight until the last minute.” At the moment he continues to be a member of Ciudadanos despite the fact that he does not believe that things have changed much internally. “The new management is more of the same. Fran Hervías, the Mr. Wolf, who is the one pulling the strings. Arrimadas has had him eat it with potatoes and after having resigned from office they have awarded him a seat in the Senate. A whole shield in case he is charged, “says the former leader of La Rioja, who after everything he has experienced is no longer afraid of anything:” If they expel me again, I don’t care but then if I throw in the towel because it would be to run and not look behind. What a mistake with Ciudadanos !. How they have deceived me! “He exclaims.