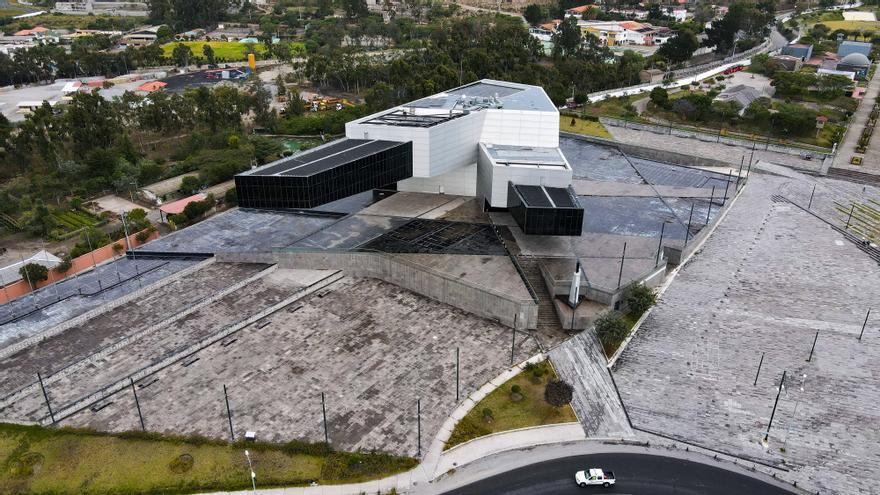 Quito, Jun 4 (EFE) .- The former headquarters of Unasur in Quito, avoids housing the Ecuadorian cultural heritage, as had been proposed by the previous Government and will remain, for the moment, in its current location despite technical reports that warn that the building it wouldn't be prepared for a strong seismic event.

The decision of the new Executive of Guillermo Lasso to suspend the transfer of the patrimonial heritage to the headquarters of the South American organization, reveals the limited budget and buildings suitable for preserving the country's cultural assets, but at the same time how problematic it is. being to find a specific function for the ex-headquarters of Unasur.

"75% of the spaces that were intended at the time for the reservation are in the two basements of the building. It is anti-technical due to moisture filtration issues that are already present," explained this Friday the undersecretary of Social Memory, Alfonso Espinosa .

A HERITAGE IN DANGER?

Added to the problem of humidity is the difficulty of controlling the necessary microclimates that are required for the conservation of the goods due to the wide spaces with high ceilings and skylights, through which the light element that could damage the pieces is filtered, points out the official.

The building was designed to house offices and its own architecture is based on a load balance that does not meet the demand of libraries and documentary and archive real estate, which require much more solid spaces.

"It does not present the facilities neither to bring the reserves, nor to install the National Museum here," said the undersecretary before announcing the ideas that are being considered for the building, such as turning it into a museum of artisan traditions.

The former General Secretariat of Unasur was inaugurated in December 2014 in the Ciudad Mitad del Mundo complex, located fourteen kilometers north of Quito, and has been in disuse since the crisis that led to the collapse of the organization and the departure of Ecuador in 2019.

Former president Lenín Moreno proposed that it be converted into a university to promote culture and ancestral knowledge, an initiative that did not end up curdling due to differences with the country's indigenous leadership.

At the end of its function as headquarters of Unasur, the building passed under the custody of the Ministry of Foreign Affairs, which handed it over a year ago as a loan to Culture and Heritage, a portfolio that then valued taking there the archaeological reserves, colonial, republican, modern art and contemporary, as well as bibliographic and documentary collections.

The reason was an alert in 2012 about the Aranjuez palace, which houses the National Collection of cultural and heritage assets of Ecuador, which was followed in 2017 by a technical report that suggested changing its function from warehouse and museum, to exclusively offices.

"In the Aranjuez Building, the assets are preserved for the moment. There are reports that indicate that in the event of a serious seismic event, that building could be affected, but it has neither subsidence, nor cracks, nor a structural problem," Espinosa said. .

His statements contrast with the much more alarmist position expressed by former Culture Minister Juan Fernando Velasco, who warned Efe last August that the same building "has a 90% probability of collapse."

The new Ecuadorian Executive who took office on May 24 has requested the opinion of engineers and construction experts to know the structural reinforcement measures that should be carried out and guarantee stability for the collections and the personnel working in the building, located in the central La Mariscal neighborhood of Quito, surrounded by academic institutions.

The undersecretary of Social Memory recognizes that the maintenance of the former headquarters of Unasur of more than 700,000 dollars a year for a portfolio with a budget of less than 20 million is "tremendously onerous", so the possibility of establishing an alliance is being evaluated public-private to give a good end to the use of the structure.

In parallel, Culture and Heritage seeks to amortize investments in recent works in the current headquarters and that it continues to function as a space for the reservation of assets, library and historical archive, in addition to the nearly 2.5 million dollars that the reopening represented three years ago of the National Museum and avoid having to move additional heritage pieces to a new headquarters.

With a fund that exceeds one million documents, artifacts and historical material of various kinds, the Ecuadorian cultural heritage will continue in the meantime waiting for a better destination.

Espinosa recognizes that "there is a historical debt of the State with respect to culture, of not having a headquarters with all the technical and architectural conditions for the National Museum and its reserves."