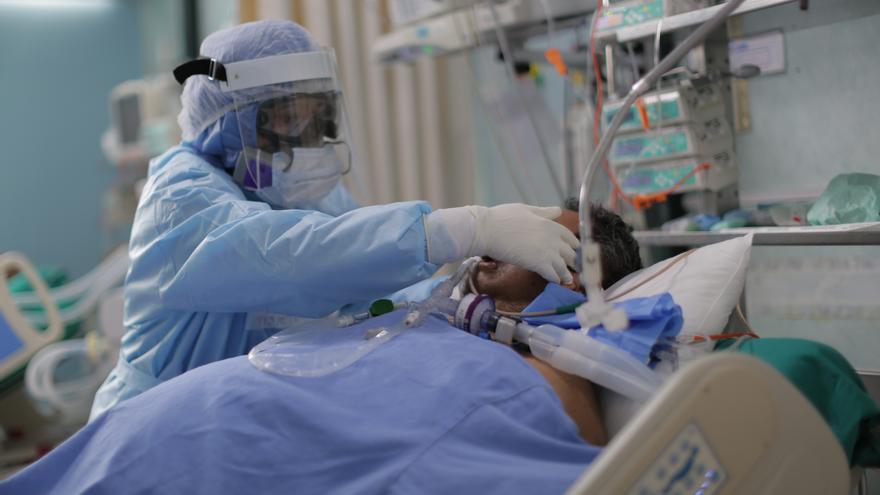 The quality of life of patients with chronic diseases worsened during the pandemic: uncertainty, problems with care and delay in diagnosis were some of the problems they suffered. According to the third phase of the ‘Study of the impact of COVID-19 on people with a chronic disease’, prepared by the Platform of Patient Organizations (POP), only 43% of the chronic patients consulted had received at least one dose of the vaccine, and almost half of the patients experienced a negative change in their health.

The president of the POP, Carina Escobar, indicated at a press conference that “health authorities must understand the urgency. We are not the same patients or the same professionals, we have gotten worse.” Escobar concluded that “we must return to being present”, because “people who are ill have a huge struggle with their illness and we cannot abandon them for longer.”

“The chronic ones are forgotten,” explains by phone Lorena López, a patient with multiple sclerosis and vice president of the Leon Multiple Sclerosis Association. López assures that, although the situation is “exceptional”, people with conditions like hers need face-to-face health care: “The evaluation that we can make of our state of health may be different from that made by a professional. The vision of the neurologist and their empathy is necessary, “he says.

Since the beginning of the pandemic, 31% of the participants have seen their chronic disease worsened or have experienced new different symptoms (11.7%). In other words, almost 43% of the patients have presented a negative change in their health. From the POP they indicate that three out of four people live with some type of pain, and the same number suffer from anxiety or depression.

As Laura Carrillo, from the NUPA association to support the families of patients with intestinal failure, explains by email, the pandemic situation for these people has complicated their emotional well-being: “The uncertainty for those who have to resort to an almost daily hospital and especially for those who need a transplant it was very difficult to manage “.

This psychologist points out that the organization has been able to verify the insecurity on the part of the affected people, and gives an example: “Some were even afraid to come to Madrid for the review,” he says.

Regarding health care, one of the most significant data is the waiting time of patients to be seen. Thus, when they needed to make a visit to the doctor, they had to wait 48 days on average to receive care, which in some cases could take up to more than a year. From the onset of symptoms to confirmation of the diagnosis, an average of 117 days could elapse, according to the report.

The problem of taking so long to diagnose complicates certain diseases. As Lorena López recounts, in the case of multiple sclerosis, the symptoms “are very confusing” so detecting the pathology early “makes the evolution of the disease much better.”

Another reason for concern for the platform and health professionals is that, according to this third phase of the POP study, which has been carried out since April 2020, only 43% of the chronically ill surveyed had received at least one dose of the vaccine . “That vaccination has not been prioritized for these people made no sense. Patients with chronic diseases who were being affected in a much greater way than a healthy patient have been left unprotected,” Diego Ayuso said at a press conference last Wednesday , Secretary General of the General Council of Nursing.

“We have been left out of the vaccination strategy,” says the vice president of the Leon Multiple Sclerosis Association. López speaks of the fear of patients to be infected by not being vaccinated, taking into account that this disease, in many cases, affects young people who are now starting the first doses.

Along the same lines as Ayuso, Antonio Blanes, director of technical services of the General Council of Official Associations of Pharmacists of Spain, assures that in these months it has been possible to verify a “loss and worsening of the quality of life in half of the patients chronic “.

On the other hand, while dissatisfaction with the healthcare received in the first phase of the study was 28%, in this third phase it has doubled to 57.2%. As María Gálvez, director of the POP and the person in charge of presenting the report, explains, “as the months go by and people (chronic) see that there is no recovery in assistance,” they become “more dissatisfied.”

And this has happened, agrees Enrique Guilabert, treasurer of the General Council of Official Medical Associations, because during the pandemic “any type of assistance was put aside.” This expert also explained that the relationship between doctor and chronic patient must be face-to-face: “If there is that continuity (of attending to the patient in person), just by walking through the door you know if his condition has worsened.”

Regarding pharmacological treatments, the study concludes that more than half of the participants faced different problems to get community treatment. According to Gálvez, in some cases these were bureaucratic: there was a certain rise, of more than ten percentage points, between the last two phases of the study among people who had complications with the expiration of the electronic prescription, which went from approximately one 10% to almost 20%.

Another aspect that presents a negative evolution for chronic patients was therapeutic adherence: there are more people without treatment, those who forget to take their medication or those who refuse to do so. In general, only 31% of patients have been able to continue their treatment in the outpatient clinic normally.

The one presented last Wednesday is the third phase of the study carried out by the POP platform for the continuity in time of the covid-19 and the “lack of health recovery.” In this way, the document closes a cycle of investigations that began in April 2020, and that in this phase has had the participation of more than 470 respondents.