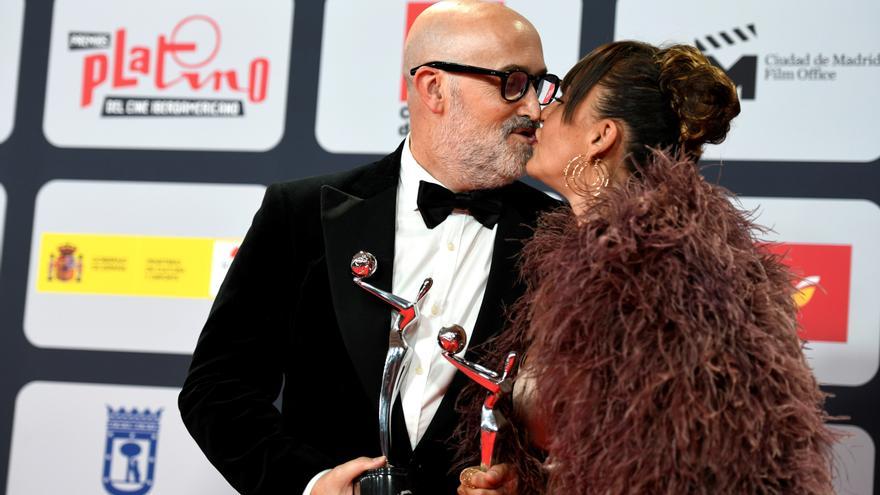 Tape Fernando Trueba ‘The forgetfulness that we will be’ and the Aitor Gabilondo series ‘Patria’, with five and four awards respectively, have been the winners of the Platinum Awards of the “reunion”, after a last virtual edition, which took place this Sunday, October 3 at Ifema Palacio Municipal de Madrid.

“After the last year and a half, it’s very nice to meet again, to look each other in the face again and what better excuse to celebrate the cinema and television that have helped us so much to maintain our sanity“, said in the opening speech one of the presenters of the gala, Juana acosta.

The return of the Platino Awards to face-to-face ‘normality’ has had the support of several political personalities, from the First Vice President of the Government and Minister of Economic Affairs and Digital Transformation, Nadia calviño (The Minister of Culture and Sports has not been released in Platinum, Miquel Iceta), to the president of the Community of Madrid, Isabel Díaz Ayuso, the mayor of Madrid, José Luis Martínez-Almeida, the vice mayor, Begoña Villacís; the delegate of Culture, Tourism and Sports, Andrea Levy, and the delegate councilor for Tourism, Almudena Maíllo.

“It is an honor this day. Madrid is the home of all accents and the epicenter of the 23 Hispanidades“, has highlighted Diaz Ayuso in the event of the delivery of the awards where he recalled the two cultural weeks that the Madrid Executive has organized, precisely to celebrate Columbus Day.

After two years of celebration in the Riviera Maya and a telematic edition marked by the pandemic, the VIII Edition of the Awards has returned to Madrid in person. “We are very committed to our legacy and what we want is to promote the audiovisual industry in Spanish in Madrid and that more and more students come, more producers, more art and more culture “, has indicated the regional president.

On his side, the mayor of Madrid, José Luis Martínez-Almeida, has assured that these awards are “a commitment to strengthen ties” with Latin America, in addition to a great opportunity “because we aspire for the image of Madrid in the world to be that of a great audiovisual set”. It is, according to Almeida, an occasion “for the entire industry to know that here in Madrid it will have the best conditions for filming.”

In June, the Platinum Ibero-American Film Awards recognized the Madrid City Council and the Community for their support and promotion of audiovisual production and the Ibero-American culture.

The actor Diego Luna, Platinum of Honor Award, has been another who has celebrated being able to do a face-to-face edition of these awards. “We have little noticed that we are here, that you are not on a screen, that I’m not in my kitchen. Thank you Madrid for making this possible, “said the actor.

In a speech that has also been marked by the use of inclusive language (Up to five times he has used the word ‘todes’ to address the public), Luna has also appealed to “an imminent responsibility not to return to the same thing” before the pandemic. “After months of uncertainty, of confronting ourselves against our own vulnerability, today we can take back the public space: I will remember it forever,” the actor pointed out excitedly.

‘The forgetfulness that we will be’ has monopolized the prizes in the final part of the gala, with recognitions in the categories of Best Film, Best Direction (Fernando Trueba) and Best Male Performance (Javier Cámara). He has also obtained the Best Screenplay (David Trueba) and Best Art Direction (Diego López).

David Trueba has starred in one of the emotional moments when collecting his award, dedicating it to two women, his mother Palmira Trueba and Cecilia Faciolince, wife of Héctor Abad (protagonist of the story of his film). “They are two example people that, although violence and war kill what you love most, they insisted the rest of their lives trying to spread love, to live without rancor and think that the only thing we can do in this world is to be a good person, “he defended.

The creator of ‘Homeland’, Aitor Gabilondo, has highlighted when collecting his last award of the night that “it was time to talk about these issues that cause so much pain”. “We have all lived this fictional story and we all had a knot in our stomach when making this story. I think the wounds are still open and I hope that this series will help coexistence in my land and around the world”, has added.

The gala, which has been enlivened with various musical performances, from Ara Malikian to Sara Baras, passing through Carlos Baute or Becky G, has lasted about three hours and the winners have chosen to speeches sometimes far from claims of any type.

Exception made from the director of ‘The mole agent’, Maite Alberdi, who has defended that “before the covid there was already the pandemic of loneliness”, claiming “a dignified old age and not relegated to oblivion both family and institutional”.

There has also been a section for warn about the climate crisis in which the actor Álex García has complained to the Governments to “continue supporting” the citizens of La Palma “in a while, when they stop opening news covers”. “The climate crisis is not a fiction, nor is the humanitarian crisis we are experiencing,” he added.

‘La llorona’, by Jayro Busdamente, one of the favorites Having received numerous nominations, it has ended up with three ‘technical’ awards: photography, sound and editing.

The actress Candela Peña has vindicated Spanish audiovisuals on stage – “I am very proud of our cinematography”, he pointed out – while joking about his work situation. “This profession is very capricious and there are moments that seem good and they are not and vice versa. I dedicate it to my agent: that you look for a job for me, that I do not have a euro,” he commented with laughter.

‘Prince’ (Alfredo Castro, for the best supporting male performance), ‘The girls’ (Best first film), ‘The hen Turuleca’ (Best Animated Film) and ‘Akelarre’ (Best Original Music) with a prize each, have completed the track record of this edition.

Tags: Awards, homeland, I forget, they triumph, we will be