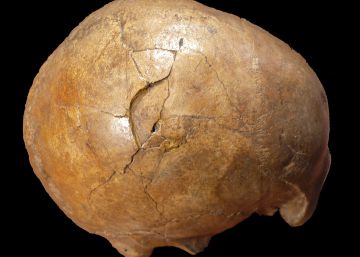 In the middle of World War II, a group of Romanian miners found a human skull in a cave in Transylvania. Years later it could be determined that it was about 33,000 years old and that it belonged to an adult man. Since its discovery, it has intrigued paleoanthropologists. One of the causes of this intrigue are two fractures in the upper part of the skull. Although many settled it saying that they were a product of the action of time on the fossil, a group of forensic experts of the past has now determined that they were provoked in life by two strong blows to the head that caused their death. It would be one of the murders between modern humans oldest

"The man suffered two fractures in the skull, one linear and another fracture with subsidence that, according to forensic evidence, occurred around the time of the death of the individual." describes the forensic anthropologist at the University of Crete (Greece) and co-author of the article, Elena Kranioti. Both the first lesion, in the occipital bone at the posterior base of the skull, and the first, in the right parietal bone, show no signs of healing such as fusions or bony corns. This assumes that they did not have time to heal, which can only indicate one of two: either they occurred in their process of fossilization or around death. Injuries perimortem, in forensic jargon.

To know if it was sooner or later, the researchers analyzed in detail the computed tomography (CT) images of the Cioclovina skull (from the cave where it was found) from all possible angles. While alive, the bones, especially those of the skull, have a relative elasticity that they lose after their owner has died. In addition, each type of impact depends on many intrinsic factors (bone morphology and thickness, body position at the moment of the blow, presence of previous injuries …) and extrinsic (speed of impact, height in case of a fall, and composition of the object …).

Views to the CAT, the injuries gave many clues. The sinking fracture has small chipped pieces of bone still attached to the rest of the bone. In addition, it has a very determined fracture line, expanding concentrically. Meanwhile, the blow to the posterior base of the skull affects the foramen magnum, a kind of hole through which all the nervous connections descend to the rest of the body, and the fracture continues until the sphenoid, which is in the deepest part of the face, which appears as deformed. Injuries like that could only be perimortem. "In a break postmortem there would be no plastic deformation marks and it would be broken at irregular right angles, "says Kranioti.

Now they had to determine the cause of the blows and if they were what killed the owner of the skull. For this, the researchers used a dozen spheres made with artificial bone and filled with a special gelatin that is used in ballistic tests as a brain. They did everything to them: they threw them from three and 10 meters, hit them with a stone and with a stick once or twice and supported against a surface or subject. The only fractures that fit with those of the Transylvanian skull are those that were caused by the stick in two successive blows, according to published in PLoS ONE.

The forensic analysis points to the fact that the attack took place head-on and that the perpetrator of the blows had to be left-handed or used both hands to hold the stick, which should be rounded. The picture could be summed up in a death by brute force cranial trauma. Reviewing the literature on fractures caused by sticks and similar objects, the scientists found a macabre coincidence. In 2006, forensic officers of the US Army who studied corpses of prisoners of war Khmer Rouge in Cambodia They found that many of them had injuries to the skull caused by blows. During the four years of his terror, in the 70s, the Khmer Rouge used to execute blows to the head. The most common lesion is like the linear fracture of the skull of Cioclovina, which comes from the Paleolithic, 33,000 years ago.

One of the injuries, at the base of the skull, reminds those caused by the execution of sticks of the Khmer Rouge

Cioclovina's is not the first murder in human history, but it is relevant because it shows the continuity of the presence of violence between humans and those who were before. In 2015, Spanish researchers published the analysis of what could be, this time, the first murder, at least of which is recorded in the fossil record. It is the case of skull 17, found in the Sima de los Huesos, in the Atapuerca site, in Burgos. There, among many other accumulated human remains, this skull from 430,000 years ago shows two holes at the height of the forehead. The object with which they were made must have reached the brain.

"They should have been two very close blows, perhaps at the peak," says paleontologist Juan Luis Arsuaga, co-author of the discovery of the skull 17 and who has not intervened in the forensic analysis of Cioclovina's skull. Arsuaga clarifies that it is not easy to determine the degree of violence among the different hominins because there are not many fractures between the fossils. "But already in Atapuerca we have examples of cannibalism from 800,000 years ago, cannibalism after homicide." comment What he does believe, supported by the data, is that the violence in the Paleolithic tended to be from the group towards the individual, towards the one that deviated from the norm, it was a violence of social control. "It is in the Neolithic when we can talk about organized violence between groups, proactive rather than reactive, almost wars between groups."