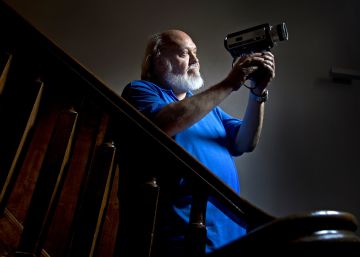 And what can I do? I remembered the character of César Vallejo, in Spain, remove this chalice from me, who wrote with his finger in the air:Vibrate the partners! ” Write now, in this broken February air, “¡¡Viba José Luis Cuerda! ” And that viba It was like a typo that unbalanced to death. As memory. We are what we remember and what we forgot, and Cuerda was a memory activist. Not as a celebration of the past, but as a rescue of possibility, as a remembered present. The “story in vilo” cinema of Cuerda, especially The tongue of the butterflies Y Blind Sunflowers, still moving because it does not only belong to the memory. It challenges us. It shakes the suspension of consciences and the worst disease: indifference to injustice. A cinema that, while not turning off, keeps brutality at bay.

When talking about the films about the Spanish Civil War (for me, an inaccurate term, because it was really the first anti-fascist war, a preface to World War II) it is already a topic to talk about the “excess” of films. One of the falsehoods that José Luis Cuerda had to endure. Actually, they are very few. The Spaniards, for example, have been able to see on the screens the Nazi death camps, but not the Francoist camps.

Too much historical memory?

Cuerda and I agreed with the Jewish historian Yosef Hayim Yerushalmi: “If that is the option, I pronounce myself for the ‘excess’ rather than for the ‘lack’, for my terror to forget is greater than my terror of having too much to remember”. Memory has a different draft of the word history. Although there is talk of “historical memory” there is always a restlessness, the phantom pain of amputation, souls in suspense. Some people think that a cinema that faces historical dramas, which still smoke like incessant volcanoes, can only be done from a militant fortress or with the protection of an armored industrial machinery. Nothing of that.

Cuerda made that kind of cinema, and the best, from fragility. His genius, in the double sense, had a lot to do with that fragile condition. In a letter addressed to Michelangelo Antonioni, published in Cahiers du Cinéma, the essayist Roland Barthes talked about the fragility of the contemporary artist. And he presented it as a virtue not as a tare. With few exceptions, those who dedicate themselves to art are never assured of their life or work. He knows that, Barthes said, his fading is possible and at any time. And he said more: he has to endure the ideological fatigue, the bad social conscience, the lure of easy art, the incessant scruple.
How fragile and how strong you have been, mate! ¡¡Viba Rope!