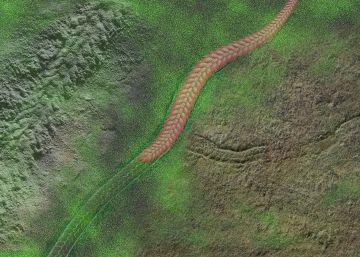 When someone moves away from something loses sharpness. It happens with the photos of the friends in the night outings and also happens with the study of the past. To know what happened in the last American elections, you can go to almost infinite contemporary and direct sources, but to revive Nero's reign, you have to go to testimonies of a few authors who wrote decades after his death. In the reconstruction of the history of life on Earth, as one advances in deep time and hundreds of millions of years go back to get closer to the origin, the pieces to complete the puzzles are scarce, valuable and sometimes enigmatic.

This Wednesday, a team of Chinese scientists led by Shuhai Xiao, from Virginia Tech University (USA), presented several of these pieces from a key stage in the evolution of animals. In a published article in the magazine Nature, describe the discovery of several fossils of about 550 million years, found in the Dengying Formation, in the Yangtze River Gorges, in southern China, of worm-like beings, which would have bilateral symmetry, associated with traces fossilized that could be yours or similar bugs. In the case of one of the fossils, the link between the worm and its trail is clear, thus becoming one of the oldest known examples of locomotion.

The period in which those worms lived (35 specimens have been found) is the Ediacárico, a time in which, as far as is known, the first animals appeared. Although they were very strange animals. They still had no bones or shells, so they couldn't leave part of their fossilized bodies. What has remained for posterity are its molds preserved in the rock. This is how the Dickinsonia, beings that lived around 560 million years ago, had a symmetrical and oval body that approached the meter and a half long and have left traces that suggest that it could move. It seems that they were crawling on the ground in search of microbes to feed on, but they had neither mouth nor anus, raising the possibility that they fed through the skin and were actually single-celled beings that grew without measure in a world without predators

Like the Dickinsonia, the new inhabitants of the Ediacárico that have just met crawled on the ocean floor in search of food. Baptized as Yilingia spiciformis, measured up to 27 centimeters long and were divided into about 50 segments, something that offers the first samples of the ability to move offered by the first divided bodies. The finding, according to the authors, also helps identify the animals responsible for the large number of fossilized trails and burrows found at that time.

Diego García Bellido, a fossil expert of this period who works at the University of Adelaide (Australia), considers the work of Xiao and his colleagues valuable, although he believes there are still mysteries to solve. "I am very surprised that none of the 35 copies keep both ends of the body and makes me think that we still do not have all the information about this organism," says García Bellido. The researcher is surprised that in these worms the body is wider in the back, unlike those that occur between arthropods (such as ants) or annelids (such as worms). In the front they house the senses and the elements with which to capture food and leave the anal area to evacuate waste. "That said, although they only have one copy, the connection between the body and the trace seems genuine," he adds, although, he points out, that trace is not "as elaborate as the one we have of Kimberela, considered a protomoluscous ”that already recorded its ability to move four million before Yilingia spiciformis.

The new piece that Xiao and his team contribute to this story, in which sometimes between a witness and another there is an abyss of millions of years, helps to understand how a key moment in animal evolution was managed: the Cambrian explosion. Just over 10 million years after the worms found in China left their trails at the bottom of the sea, deposits from around the world show a creative burst which gave rise to a world that would be much more familiar to us than Ediacara's.

Virtually all the designs that are recognized today in today's animals, including humans, appeared then. The ability to move is generalized, skeletons arise and the shells, which would produce more abundant and much more informative fossils than those of the soft bodies of previous beings, and sexual reproduction appears as a winning strategy for many of the species seen without a microscope. Before that time, most animals had complexions other than those currently known. "Some were shaped like a fractal (mathematical objects whose apparently irregular structure is repeated at different scales)," and others "resembled a spiral galaxy with eight arms," He explained in THE COUNTRY Jochen Brocks, a researcher at the National University of Australia, the country that houses the site that gave its name to the Ediacárico period.

Biologists do not know how to relate those animals, almost aliens, with the current ones, but they do not have that problem with the fossils presented this Wednesday. The trail of Yilingia It shows the path to structures that would allow targeted mobility or hunting as we understand it today. The characteristics of this worm "are those found in a group of animals (with bilateral symmetry), a group that includes humans and most animals," says Xiao. In the fossils of the Yangtze Gorges, our history is also reconstructed.