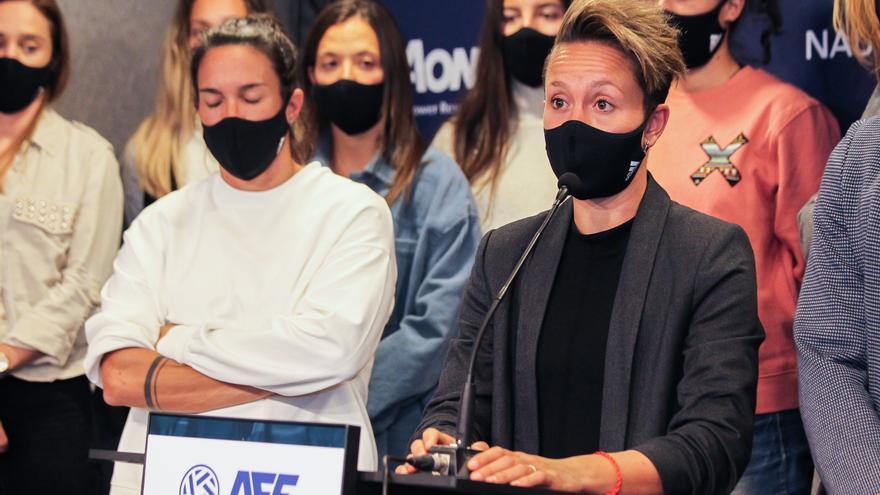 They went on strike in 2019 and it seemed that this served to expedite the dignity of the labor and material conditions in which soccer players play in Spain, but two years later, everything remains the same. That is why the athletes once again threaten a strike.

Silvia Messeguer, Atlético de Madrid footballer and vice president of the Association of Spanish Footballers (AFE), considered this Tuesday that “a strike will have to be made” if the situation of blocking the professionalization of the First Iberdrola continues, denounced by the players in this league and by the union itself.

“We are tired of not being in that professional league, we just want to have those conditions that we deserve” added Messeguer during the press conference called by the athletes and the AFE, which took place at the headquarters of this association in Madrid.

As a first measure of protest, the players are taking 30-second breaks after the kickoff of each match. Symbolically, they cover the shield of the Royal Spanish Football Federation.

Levante, Real Sociedad and Villarreal had previously been sanctioned with three points for not wearing the RFEF logo on their shirts.

Beyond wage inequality, the players also denounce the material conditions. On the 14th, a Rayo Vallecano player had to be treated by the Athletic Club de Bilbao toilets because, despite playing at home, the Madrid team lacks medical services.

“We were lucky that the Athletic doctor was there and that nothing had happened to his player, but if it is more serious, I don’t know what would have happened, those seconds are gold. Little has happened,” said Rayo Pilar García midfielder to ‘Union Lightning’.

In addition, the players report that they are often forced to play on artificial grass pitches, where injuries are more likely and more serious. In some cases, even in facilities that cannot be accessed by an ambulance.

In a statement released on the 10th, the players regretted “the lack of leadership of the Higher Sports Council” and recalled that on March 25, Carmen Calvo – then vice president – promised that the Government of Spain would give the impetus necessary to the professional women’s league.

“Once again we are the players themselves who have to show their faces again to remind everyone, and especially this Government, that the professionalization of women’s football is the best way to work for equality in sport, especially when it is produces such an obvious situation of inequality between men and women, “added that note.