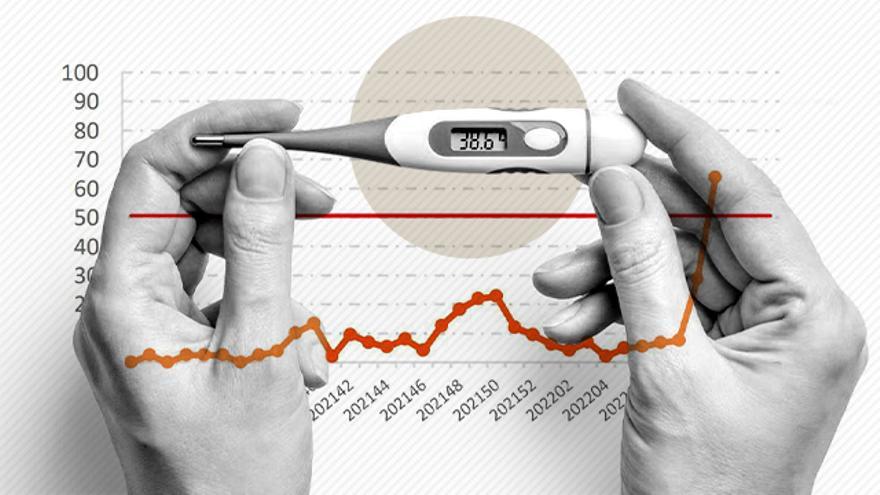 The flu has returned after two years appeased by the explosion of another virus that has made it the competition: SARS-CoV-2. It arrives very late, almost in spring, when the season should be ending. Castilla y León and Catalonia have already officially entered an epidemic and the cases point to growth. The sentinel networks of the autonomous communities, the centers and doctors chosen to monitor how the respiratory viruses are doing, have detected an "increase in circulation" in Primary Care and in hospitals, according to reports from the Carlos III Health Institute, dependent on the Ministry of Health, for the last two weeks. One month ago, the same reports spoke of a "poor" transmission.

José María Eirós, director of the National Influenza Center in Valladolid, confirms that "we have returned to significant flu activity." In his hospital, the Río Hortega also in Valladolid, the positivity of the samples taken have grown exponentially, from 0.7% in January to 42.5% in March. That the flu is here is a reality, what scholars of this virus do not know is how the wave will behave. "We are going to learn this season because there is a new element: the coronavirus pandemic," says Eirós in a conversation with elDiario.es.

The evolution "must be confirmed in the coming weeks," says the latest ISCIII report. At the moment the figures are very far from a usual flu season before the pandemic, where peaks of 400 and 500 cases per 100,000 inhabitants could be reached. The latest data from Castilla y León place the incidence at around 60. Between November and December there was a small uptick, but as it came it went. Then ómicron began to expand strongly throughout Spain.

But some governments are already warning that it is advisable to take extreme precautions, especially due to the "ravage that the disease can cause in the elderly", the most vulnerable to complications.

The Catalan Minister of Health reported that the flu epidemic had reached Catalonia and recalled the three keys to protecting yourself, the same ones that we have been listening to for two years to prevent coronavirus: mask (whose end is near in some interiors), good hand hygiene and social distance. In Navarra, the total admissions for flu in the week of March 7 to 13 (21) exceeded those hospitalized for COVID-19 (12), although both values ​​are at "low levels", the regional government specifies.

The saturation of hospitals it was a common sight before the pandemic at the peak of the flu season. The virus is no nonsense for people with more fragile health: a season of low mortality, like the one that occurred in 2018-2019, caused 6,300 deaths, according to estimates by the Carlos III Health Institute. The patients most threatened by the flu are also the weakest against SARS-CoV-2, which continues to circulate at a significant level. The rapid decline in transmission has stalled at a high echelon and some communities face a climb.

Experts wonder why now, near the end of the classic season, the flu has reappeared. The usual window in which flu viruses are expected is from October to March. Have you found a niche with the descent of the sixth wave? "Viruses look for their chance to thrive and come out when they can. We have given the flu and others few options because the measures we have taken for COVID-19 affect them, they have not had elements to hold on to," says Óscar Zurriaga, vice president of the Spanish Society of Epidemiology. "The best circumstances for expansion have now been given: the reduction of measures, the relaxation of the use of the mask and the increase in social interactions," Eirós analyzes.

In any case, virologists and epidemiologists say they are not very confident about how the curve will behave. On the one hand, due to the concurrence with the pandemic. "We have had two years in which respiratory viruses have not worked as they have until now. For example, last year we had a moment in the summer of an increase in syncytial virus, which affects children more, and it seemed that something was going to happen... but it was something punctual", puts as an example Zurriaga.

They even weigh that there may have been more flu than the networks were able to capture due to the demand for public health and surveillance resources generated by SARS-CoV-2 alone. Or that there are coinfections that do not look good either once the COVID-19 test comes out positive.

The scenario is also more uncertain because for years they have been observing a delay in the epidemic phases. "The normal thing was to start having cases from October and reach the peak in the December bridge. But before the coronavirus, the maximum point had been occurring in early January with a displacement," explains Inmaculada Cuesta, a member of the Conference. of Vaccines of the Ministry of Health and secretary of the National Association of Nursing and Vaccines (ANENVAC).

The warning voice has been given by the surveillance systems for Acute Respiratory Infections (ARI and SARI) that include influenza but also other viruses such as syncytial, and are made up of a series of doctors, centers and representative hospitals in the territory in charge of counting the cases and then extrapolating what the sample says to all of Spain. The system allows you to see trends and warn, as now, of a sudden rise. It is the same way of monitoring that is planned to be used for SARS-CoV-2 from 2023.

In the health centers they are already beginning to receive some "flu pictures that are COVID-19 negative", explains the head of Primary Care of the UGT in Madrid, Concha Herranz. The highest incidence seems to be in children. Castilla y León, for example, finds the most pronounced increase among boys and girls from 0 to 4 years, with 180 cases per 100,000 inhabitants. In hospitals, the highest rates of acute respiratory infections, which include influenza and other viruses (also coronaviruses in some communities), are concentrated in those over 79 years of age, followed by the group of up to 4 years, which would match the flu .

The "vertical" rise in cases, as the Government has defined it, is also being noticed in Europe. The European Center for Disease Control and Prevention reported that 14% of the samples analyzed from the sentinel networks had been positive compared to 10% the previous week.

Every year, health authorities remind that the vaccine is still the most effective measure to prevent the disease and a possible fatal outcome. It is indicated for people over 65 years of age, risk patients and health professionals. It is 65% effective in preventing contagion, explains Eirós, from the National Center for Influenza, but its adherence still has room for improvement. The elderly wear it mostly, but in the restrooms the data fluctuates according to the season. In 2019-2020, only 40% administered the preparation, a percentage that is far from that recommended by the WHO (65%).

The arrival of the pandemic, however, has encouraged the campaign. There is still no data from the Ministry of Health on the latter, but every year the pharmaceutical company Sanofi publishes a demographic study, called the Grypometer, that monitors influenza coverage. According to their data, 66% of those over 65 years of age have been vaccinated (the goal is 75%), while in the case of health professionals, coverage amounts to 70% compared to the 40% quantified before the pandemic. Sanofi's results warn, however, "notable setbacks" among the population at risk, such as pregnant women and people with chronic diseases with a drop to half the rate.

If it is confirmed in the coming weeks that the flu is advancing, it may be an element that forces us to rethink the decision on the removal of masks indoors. The Government had already put the step on hold last week waiting to see how the transmission of the coronavirus evolved. Now we will also have to pay attention to influenza, re-emerging after two years in negligible circulation levels.