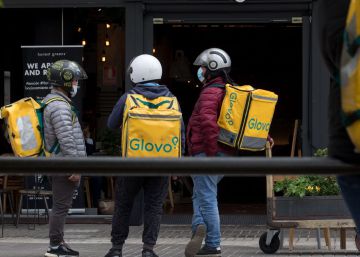 The false self-employed have long been in the crosshairs of the Administration and the courts. In the last year, the Labor Inspectorate has registered 11,013 Glovo distributors as workers. The body also demands that you pay 16.2 million euros for unpaid contributions during this time. This decision came after the Supreme Court determined for the first time that the relationship between a Glovo dealer and his company has a labor nature, thus declaring that these riders They are false self-employed.

In recent years, suspicions have soared that companies, especially those emerging from the digital economy, were using this form of fraudulent hiring. Debate that, since 2017, has already been installed in the courts, which have had to analyze a significant number of cases of deriders who claimed that they were employed (labor) and not self-employed (self-employed).

The resolutions, however, have been disparate depending on the conditions established by each company. As the experts explain, a general conclusion valid for all cases cannot be reached, but the circumstances of each case must be studied. What elements do the judges take into account to determine the existence of a false self-employed person?

The worker who operates autonomously is characterized, among other things, because he can organize and distribute his tasks freely. Therefore, an indicator that helps to identify if there is a hidden employment relationship is if the company establishes a series of obligations or guidelines when carrying out the work, if it imposes a working schedule or forces to sign in at the beginning and end of the day .

Robert Gutiérrez, labor lawyer, points out that the key is to determine whether the worker complies with the elements of hiring for others. These are defined in article 1 of the Workers’ Statute, and are dependency (that is, that the work is carried out under the organization and direction of another person) and someone else (that the company assumes the risks and benefits).

Another revealing indication is whether, despite being listed under the Special Regime for Self-Employed Workers (RETA), the worker performs his tasks at the company’s facilities together with the rest of the workforce, or if he uses tools provided by the company, among other elements. In this line, it is also a revealing element if the employee is obliged to perform the service personally and cannot use collaborators.

The lawyer also adds other signs that may be more evident, such as whether the company has employed employees who perform the same tasks as the self-employed, “or whether before joining the RETA, the person was hired by someone else’s account and did identical tasks ”.

3. Have a fixed salary

The lawyer Victor Canalda points out another important agent to analyze: compensation. “It is important to identify if the apparent self-employed person has the ability to set their prices or rates or if, on the contrary, they are taxed on a fixed basis every month,” he specified. This second scenario would be typical of an employment relationship for someone else.

In this sense, it is also a sign of a fraudulent relationship if the worker does not run the risk of having losses, since he charges what is stipulated in a contract regardless of the result, or if he can be sanctioned or penalized for non-compliance or lack of performance.

4. Request vacations and other permits

The self-employed person does not have in himself a right to vacations because, by distributing his work freely, he is in charge of deciding when he works and when not. Therefore, a clear indication of false self-employment is that it is the company that organizes the vacations “or the one that authorizes other paid leave,” says Canalda, such as paternity or maternity leave, hospitalization of a relative, moving, etc. .

On the other hand, the lawyer considers it relevant to determine who owns the client portfolio, and whose brand is offered in the market. If the answer is the company, it is more likely that the contract is for false self-employed.

For companies, a contract of these characteristics is a very profitable solution, as it provides a series of economic advantages, “such as avoiding the cost of contributions, the derivative of dismissal and other indirect costs such as work tools, training and unionization” , says the lawyer.

What to do if I suspect that I am false self-employed?

Now, what should a worker who is hired as a false self-employed do? “The ideal is to file a complaint with the Labor Inspectorate,” says Jonathan Gallego, a lawyer for the CC OO legal office. Once received, the agency begins investigative work to determine whether it is an employment or commercial relationship. If the fraud is confirmed, the inspection, without having to go through a court, “opens a record of infringement and could force the company to register these employees with Social Security,” the lawyer details. At the same time, it could sanction the company with fines of up to 3,000 euros.

Beyond this, the company could face additional consequences. In the first place, the Social Security will be able to claim the unpaid contributions of up to the previous four years. “In addition, with a 20% surcharge,” adds Gutiérrez. Likewise, the employee could claim the salary difference during the last year between what was collected and the salary set in the agreement, as well as compensation for unfair dismissal “when the company dispenses with it”, concludes the lawyer.

Our legislation provides for a third element: the Economically Dependent Self-Employed Worker (TRADE). Introduced in our legal system in 2007, this figure can generate a lot of confusion, since it is situated on the border between the employed worker, the self-employed worker and the false self-employed person, so the limits between the three “are very blurred. ”, Comments the lawyer Víctor Canalda. Thus, TRADE are characterized by carrying out a professional activity in a regular and direct way for a client on whom they depend economically “because they receive at least 75% of their income.” In addition, they cannot contract or subcontract to third parties to carry out their work, nor carry out their activity in an undifferentiated manner with the client’s workers. In contrast to employed persons, TRADE must carry out their activity with their own organizational and material criteria, among other things.