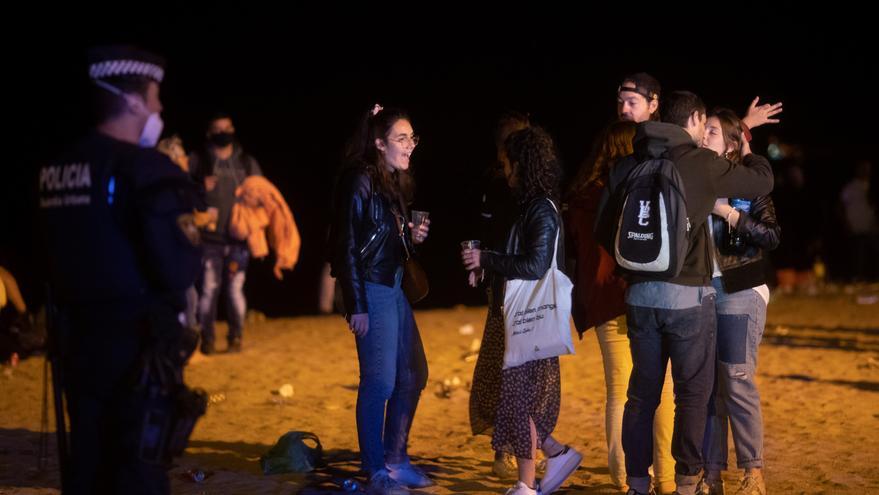 Madrid, May 16 (EFE) .- The first full weekend after the end of the state of alarm has been marked by the displacements of many citizens who, after months without being able to do so, have taken the opportunity to escape to the coast or to the town while that some scenes of large bottles and crowds have happened again.

Although the incidents have not been generalized, in some points such as the city of Barcelona on Saturday night has resulted in the eviction of more than 9,000 people who participated in mass concentrations and large bottles.

As sources from the Barcelona City Council have informed Efe, the main point of the Catalan capital where a more massive concentration has been registered has been the beach of Sant Miquel, where the agents have dispersed some 2,000 people.

In the city of Madrid, which celebrates its San Isidro festivities this weekend, the City Council has highlighted that the celebration has been “exemplary” with hardly any notable incidents and far from the images of massive crowds and large bottles of the last weekend.

In Salamanca, Pamplona, ​​Aragón or Murcia there have also been some incidents such as a macro-party with 151 people in an abandoned factory in the Echavacoiz neighborhood of Pamplona or the arrest of two men after a fight at the closure of the bars in a leisure area in the Murcian capital.

The Government has insisted on launching a message so that citizens enjoy but always following the health recommendations, as stressed this Sunday by the Minister of Culture and Sports, José Manuel Rodríguez Uribes, who has warned the young people who have participated in this night in large crowds that “must be careful”.

ESCAPES TO THE COAST

But beyond these scenes, what has left the most this first weekend without restrictions on mobility between communities are the escapes, either to the coast, the mountains or the town, and the family reunions after months without being able to do so. .

A certain return to normality prior to the pandemic that has been reflected especially in the beaches of Levante and on the roads: trips to leave Madrid since Friday have increased by 50% compared to those that occurred the previous week and are Similar to those recorded on a weekend in May prior to the pandemic, according to data from the General Directorate of Traffic (DGT).

An increase that has forced to enable this Sunday afternoon lanes in the opposite direction to the usual one on the Burgos highway (A-1), the Valencia highway (A-3) and the Extremadura highway (A-5), of entrance to Madrid, the three roads with the most traffic problems, although the complications have affected practically all the routes out of the capital.

EVOLUTION OF THE PANDEMIC

Regarding the data on the evolution of the pandemic, the general trend, according to the data reported by the health authorities of the autonomous communities, has continued to be downward, although with exceptions.

Thus, this Sunday Catalonia has notified that the number of people admitted for covid-19 in hospitals in the region has risen in the last twenty-four hours by 33, to 1,115 patients, of which 403, four more than the day before, are in ICUs, which in this way once again overcome the psychological barrier of 400 patients.

In La Rioja, active cases have registered a sharp decline, from 62 in one day, to 380, a figure similar to what this community had at the beginning of last month.

Cantabria has reported 28 new infections, seven more than yesterday, and although the accumulated incidence continues its downward trend, the occupancy of ICUs has risen almost three points and stands at 21.9%.

The Government of Aragon has notified 148 new cases of coronavirus and no deaths from the disease; While Asturias has confirmed 37 new infections, 18 less than on Friday, on a day in which for the third consecutive day no deaths were registered in the Principality.

And in the Basque Country, 281 new positives for covid have been reported compared to 407 the day before, the lowest figure since March 20.

The week will start with new milestones in vaccination such as the one advanced by the Community of Madrid, which will begin to cite to vaccinate against the coronavirus this Monday with doses of Pfizer, Moderna and Janssen to the general population of 50 to 55 years.