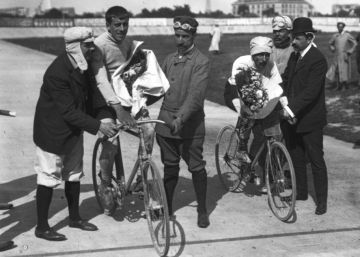 On July 15, 1905 the Tour ascends to the Ball of Alsace. Henri Desgrange, one of the drivers of the race, decides to expand the horizons of the race. "We will no longer go directly from Paris to Lyon, but we will make a big detour through Nancy and Besançon," he says. The stage starts at dawn, the cyclists see the sunrise from the bicycle. They collide with the colossus of the Vosges. "The pedals are spinning more slowly, they almost seem to want to stop in neutral, then it's like a rattle of death, the complete abandonment of oneself, the chest beats with great blows, the body straightens up, the effort is over, the man He leans to the side, like a falling column, then gets off the bike, it's over, he's irreparably defeated, "he says. Victor Breyer in his chronicle of L'Auto.

"Six, Petit Breton loses a hundred meters because of an ineffective assistant and will not be able to recover them," the journalist continues. "Start a fight that would qualify as an epic". The precise story, minute by minute. "The first five kilometers are passed without incident, then it is Cornet who demarra furiously, trying to distance his rivals but, to our surprise, it is Trousselier who gives in first, there are only four left, it is too hard for Cornet. the back with the effort and the others respond, but Georget's strength is running out – only three remain! A little further, Cornet sees his great rival, Aucouturier, off the hook, we can not believe it, but the big surprise is We see that, suddenly, Pottier overtakes Cornet, the two engage in a fierce duel, snorting and with jets of sweat across his face, deep sighs from his chest, like those of the metallurgical workers in front of a furnace Red alive, Cornet loses two lengths, he recovers them and goes down again, again, and another, the victory is for René Pottier, who does not rise above the top ".

Three years later, on July 15, 1908. A cyclist cries right there. It's André Pottier. The best have been around for a long time. He has stopped at the monolith that Desgrange has dedicated to his brother René. At the top, next to the monument of Joan of Arc and the statue of the Virgin. In January 1907, months after winning the Tour, René committed suicide, at age 28, apparently for his wife's deception, hanging on the hook where he parked his Peugeot bike in a pavilion next to his home. He had been the first king of the mountain after ascending the Ball of Alsace, "an animal on the bicycle", according to Lucien Petit-Breton, his great rival. Pottier, "thin as a stick, black as coal", with an elegant mustache finished in tip, managed to get on the ball without getting off the bike. Three years later it was history of the Tour. "Maybe it was the first time in this brave man's life that we have to appeal to what moralists call a lack of courage," writes Desgrange.