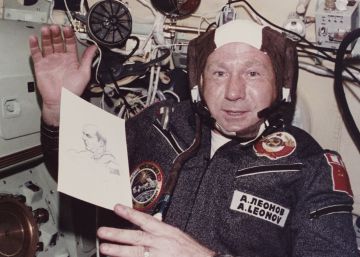 Alexei Leonov, the Soviet cosmonaut who became the first person to take a walk in space, has died at age 86, according to Russian agency Ria Novosti.

Leonov was one of the few living members of the mythical group of first Soviet cosmonauts, whose visible head It was Yuri Gagarin, the first person who traveled to space, in 1961. In those years communist Russia was striding ahead of the US in space and Leonov was proof of that.

On March 18, 1965, this son of Siberian workers opened the hatch of his ship to enter history, something he achieved in part by ignoring the orders of his superiors, as he explained in an interview in 2011. Leonov's mission was to leave to space from his ship, which orbited the Earth at about 500 kilometers of altitude and about 20,000 kilometers per hour, and perform the first spacewalk. He did it without problems, but when he tried to return he realized that his suit had inflated like a balloon and could no longer fit through the hatch. Leonov remembers that, without informing his superiors by radio, he decided to open a spigot in his suit to expel air, which allowed him to return to the safe and sound capsule.

Back on Earth, a new ruling forced Leonov and his partner, Pavel Belyaev, to land in the taiga covered by a meter and a half of snow, hundreds of kilometers from the fixed landing point. “There were 20 degrees below zero. I started sending morse signals, but there was no response. I thought we were lost and, in fact, that day several state broadcasters began broadcasting the Requiem from Mozart. The next day, finally, we spotted a helicopter. We had to walk three days through the snow until we met him, ”Leonov recalled in 2011.

Ten years later, in 1975, this cosmonaut was the first Soviet to shake hands with an American in space during the joint mission with the US Apollo-Soyuz, an attempt to stage the drop in tension between the two superpowers. By then Russia had already lost the space race, as it was its American rivals that got the most difficult yet being the first to bring two astronauts to the surface of the Moon, Neil Armstrong and Buzz Aldrin, in 1969, now half century. Gagarin had died a year earlier in a plane crash.

Test pilot, general of the air forces, engineer and amateur painter, Leónov dedicated the last part of his life to scientific dissemination and space exploration. During that stage he visited Spain several times with other leading figures of science and space, such as Setphen Hawking and his colleague Neil Armstrong.