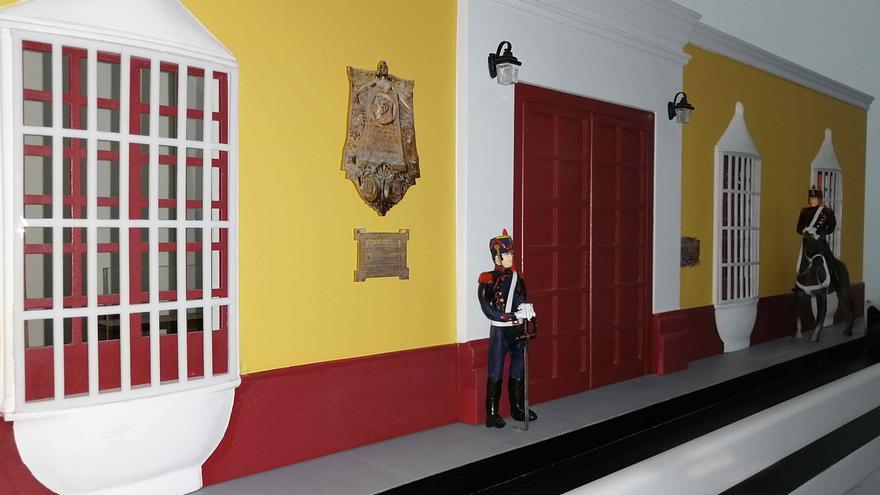 Lima, Jul 26 (EFE) .- The first house and barracks occupied by Argentine General José de San Martín when he arrived 200 years ago with his liberating expedition to Peru is being rebuilt and will soon be a modern museum in the southern city of Pisco. after being collapsed by an earthquake that struck that town in 2007.

The reconstruction is carried out within the framework of the commemoration of the bicentennial of Peru’s independence, which is celebrated on July 28, and is financed by the Camisea Consortium, which extracts and produces gas from that natural deposit in southern Peru.

The liberating expedition of San Martín landed on September 8, 1820 on the beaches of Paracas, near the port of Pisco, a port city located about 230 kilometers south of Lima, from where the Argentine general established the strategic plan for independence. from Peru.

The reconstruction works are carried out after the signing, in November 2019, of an inter-institutional collaboration agreement with the Municipality of Pisco, the Pisco Social Club and the Peruvian Ministry of Culture.

This seventeenth century mansion, which was declared a “monument” in 1942, was one of the buildings collapsed by the 7.9-magnitude earthquake that struck Pisco on August 15, 2007 and a group of professionals has been employed in its reconstruction. between workers, engineers and architects, with a total investment of about 4 million soles (about a million dollars).

“One of the main points of the reconstruction of the house is that it is going to present a museum proposal that revalues ​​the property and, apart, everything that has to do with life and the liberating expedition in Peru,” the architect and museum designer in charge of the project, Ana María Lebrun.

In this sense, the proposal includes elements such as a hologram that will show San Martín preparing the strategic plan of the liberating expedition, audiovisuals about his life, including an animated one for children, and real-scale reproductions, interactive models, a play area and interactive games.

All this will be presented in three environments, from the hall to the main hall and the exhibition hall, as well as a play area for cultural and educational activities.

THE DETAIL OF THE WORKS

Lebrun explained that in 2007 “unfortunately the house collapsed almost in its entirety, only a part of the front wall and a couple of interior walls remained”, which then had to be demolished to make the reconstruction “as it was” before the earthquake .

The work, which is expected to be delivered in the coming months, is 50% complete and the museographic part is approximately 60%, since, according to Lebrun, it works with different suppliers and artists who are doing oil paintings and watercolors. , as well as mannequins and models.

The museologist highlighted that the Camisea Consortium has provided “all the necessary support for the full fulfillment of this project”, which she considered “emblematic” because it is related to the cultural and historical heritage of her country.

“This is very important and should be emphasized, so that more companies, both national and international, can provide this support to projects that are really significant,” he said.

THE SUPPORT OF CAMISEA

In this regard, Gonzalo Castro De La Mata, manager of External Affairs of Pluspetrol, operator of Camisea, highlighted the historical-cultural significance of the project and the fact that the private company is “making an effort to support the country to rebuild this barracks. where San Martín stayed “.

Castro De La Mata recalled that the consortium already has more than 15 years of operations in Camisea, which has served to change the country’s energy matrix and reduce the price of electricity, thus contributing “a lot to the communities and their environment.”

“In the case of Pisco we have a liquefaction plant and there we are working with the surrounding communities, we have invested more than 300 million soles (about 76.3 million dollars) in a series of projects, including this reconstruction,” he stressed .

The financing comes from the Camisea Framework Commitment, a voluntary fund of 100 million soles (more than 25 million dollars) that was implemented after an agreement with the Peruvian authorities.

“The Camisea Consortium has contributed (to Peru) more than 40,000 million soles in royalties and income tax, that money goes to the State, but that is not enough, the private company apart from all its legal obligations has something that is called corporate social responsibility, we consider it our obligation to be good neighbors, “the official emphasized.

He remarked that, for this reason, they seek to “work and directly support the residents of the environment through all these projects” such as that of the house and barracks in San Martín, which has great historical importance for Peru.

In this sense, Lebrun stressed that it will be “a relevant cultural project”, since it will allow the inhabitants of Pisco “every day to feel more identified” with their history and heritage.

The final intention, he added, is for it to become “a source of knowledge and roots for all of them and that (…) they feel proud of being Pisco, because in Pisco the first flag and the first national emblem were created” .