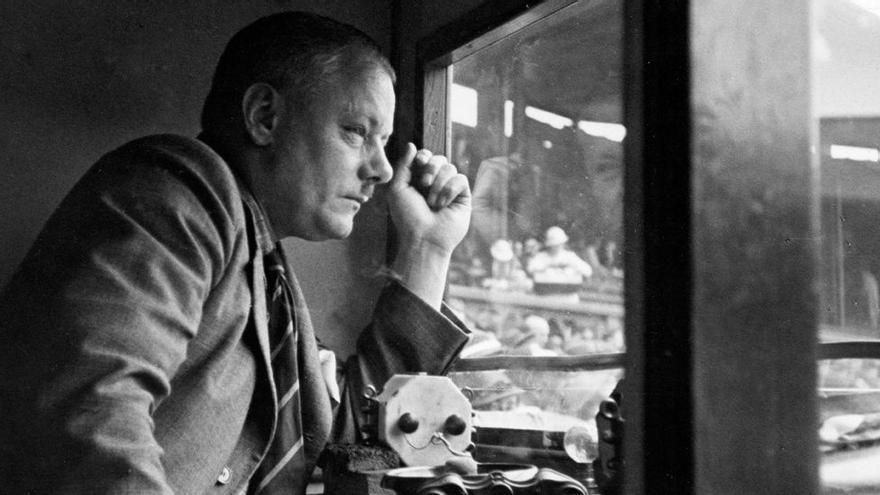 The Arsenal, which has historically been the team that has most dared to innovate, had long been thinking about the possibility of bringing its name and its matches to as many fans as possible. The football in the twenties it lived its great emergence at the popular level. The sport had taken root in an unthinkable way in the most modest classes of the population and the stadiums, still old, uncomfortable and small, were filled to burst every weekend. In Highbury there were thousands of fans who every day stayed at the gates without being able to enter and the directors of the London outfit thought that radio could be a perfect ally in that fight to gain followers. Whoever could not watch the game in the stadium could do so through the airwaves. The father of the idea was George Allison, a journalist who had been hired by Arsenal to improve the "game program" that was delivered to the gates of the stadium. He was the one who presented his proposal to those responsible for the club who embraced the plan passionately. And they immediately went to the 'BBC'. Those responsible for the station listened with interest to his idea, but there were innumerable administrative obstacles that made it almost impossible to carry it out. For that reason the plan was parked at the bottom of a drawer.

The situation turned around on January 1, 1927. That day the 'BBC' received the Royal Charter, the decree by which it turned the station into a public corporation and, therefore, empowered it to broadcast all those events that could be considered of general interest. And sports in general and football in particular, it is clear that they were. Then the proposal that Arsenal had brought to their offices a few months earlier was dusted off. Bureaucratic impediments had ceased to be an obstacle and were now simply a matter of will, effort and some money. They wasted no time. The 'BBC' decided there was no point waiting and at an urgent meeting the decision was made that the first football match to be broadcast live would be Arsenal-Sheffield United which was scheduled at Highbury on January 22. Possibly there were other more interesting games that day (the two teams had started the season in the lower zone of the classification), but those responsible for the already public radio understood that Arsenal, the father of the idea, should have the honor of inaugurating that new time. Also, being a team from London made it a lot easier from a technical point of view. Any problem would be easier to solve.

But the directors of the 'BBC' did not want errors in that expected premiere. They needed to do a test first that would help the technicians to correct bugs and help the commentators to carry out their work. It was then decided that the first sporting event that would have live radio would be the Five Nations match that in Twickenham the teams of England and Wales had disputed a week before, on January 15. Another major event for sports fans in the United Kingdom.

One of the first decisions for those responsible for the 'BBC' was choose the announcer that the party would take to each of the radio sets in the country. They chose Teddy Wakelam for that job. It was the former captain of the Harlequins who, due to an injury, had had to withdraw from the rugby shortly before, in 1924, at the age of thirty. He was a veteran of the First World War, highly respected, who had been collaborating with the 'BBC' for some time. That circumstance and his knowledge of rugby pushed the station managers to entrust him with the transmission.

Another matter that raised an important internal debate in the 'BBC' was that the listeners were aware of how the game was developing and in which area of ​​the field the action was located in every instant. His idea was that Wakelam could not offer all the necessary information and that it was essential to have another tool that could serve this purpose in order to keep the audience more connected to the game. Broadcaster producer Lance Sieveking found the solution. Design a squad that divided the field into eight playing areas and assigned a number to each of them. The week of the match they distributed the diagram in the weekly 'Radio Times', which belonged to the 'BBC', and where all the weekly programming of the station appeared. While Wakelam transmitted the action, a collaborator would be in charge of providing the information so that the listeners would know exactly in which area of ​​the field the game was taking place at all times.

And so it was done. The 'BBC' installed in the upper area of ​​Twickenham a small wooden hut where on January 15, 1927 Wakelam and CA Lewis entered to fulfill their mission. On the glass in front of him, Wakelam left a note with a slogan: "Do not swear." A kind of warning that he gave himself to do not get carried away by enthusiasm during transmission. Everything worked perfectly. The connection was good, the voice of the announcer reached British homes with clarity, England beat Wales by 11-9 and even that day a new British expression was born since there is the conviction that the phrase "back to square one" (which means restarting something ) originated from this practice, which consisted of contributing the sector of the field in which the action took place at each moment of the game.

With the confidence and enthusiasm that the success of the broadcast of the rugby match had awakened, the 'BBC' prepared for the duel between Arsenal and Sheffield United, which was really their great goal. The rugby match had only been a dress rehearsal. Although Wakelam came from rugby, those responsible for the station once again trusted him and his dance partner, CA Lewis, for the task. He was a great sports fan in general, not just rugby, and they were confident that he would also successfully accomplish that mission.

As they did with the Five Nations party, the 'BBC' published in 'Radio Times' the plan of the pitch of Highbury divided into the different sectors so that Lewis was adding to Wakelam's speech the area in which the ball was at all times. A quick test among listeners had concluded that the idea worked and was useful, so they returned the same way. There were not many more news except that the wooden booth where they were placed this time, due to the conditions of the Arsenal stadium, had worse visibility to follow the development of the game. As if that were not enough that day a intense fog in London with what the work of the commentators became somewhat more complicated. But they carried out their plan amid the enthusiasm of the directors of the 'BBC'.

Arsenal and Sheffield United drew 1-1 and the Gunners forward, Charlie buchan, had the honor of scoring the first goal that was sung live Through the radio. The next day the newspapers and fans enthusiastically greeted the success of the broadcast and the 'BBC' knew that they would no longer be able to get off that ship that had just set sail. That same year they offered live the Cup final and some other match. There was still no infrastructure or means to do it every weekend. That would come little by little over time. Wakeman became an essential character in sports broadcasts from the 'BBC' and expanded its range to horse racing, boxing or the Wimbledon tournament. His voice remained in the history of sport and radio. The first that brought a goal to the home of football fans.