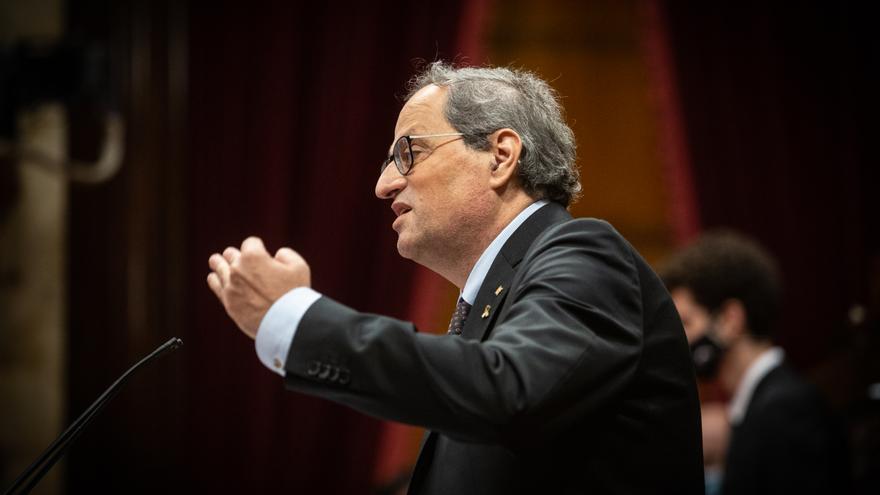 The Superior Court of Justice of Catalonia (TSJC) has set the deadlines for the first disqualification of Quim Torra from holding public office. The judges have agreed to lower the disqualification by almost three months by discounting from the 18-month sentence for ties the almost ninety days that he was suspended as a deputy of the Parliament before the final sentence of the Supreme.

In a car, the Civil and Criminal Chamber of the TSJC thus decides the limits of the execution of the sentence of one and a half years of disqualification that was imposed on Torra for a crime of disobedience by disregarding the order of the Electoral Board to withdraw the symbols of support for politicians imprisoned in public buildings.

The Prosecutor’s Office and Vox They had already accepted that Quim Torra would collect the pension corresponding to his position in the Catalan executive and could have the office of expresident. The majority of the court agrees to maintain his pension as former head of the Catalan executive, a decision against which the president of the TSJC, Jesús María Barrientos, has taken a private vote.

Unlike his colleagues in the Sala, Barrientos argues that Torra’s disqualification as president “necessarily and legally entails, without the need for any debate in plenary,” the loss of all rights –including economic ones– and also of treatment and honors such as expresident. However, the majority of the court agrees that Torra can dispose of the prerogatives – salary, office with secretary and cabinet and official car at the expense of the public treasury – of expresident, understanding that the disqualification sentence “cannot be extended” beyond the position of president who occupied.

Regarding the time that the disqualification from holding public office to which he was convicted should last, the Prosecutor’s Office opposed subtracting from 18 months of the sentence half of the almost eight months in which Torra was left without a seat before being sentenced firm by decision of the Central Electoral Board (JEC), as requested by the defense.

The TSJC, this time unanimously, responds in part to the defense’s request and agrees that one of every three days of the eight months that he was suspended as a member of Parliament – about 80 days – be subtracted from the 18 months of disqualification, which sets the horizon for the end of the disqualification in January 2022.

However, almost certainly Torra will add a new conviction for disqualification since he is once again charged with disobedience for not removing the banner of support for the independence prisoners for the second time. In case of being sentenced again, Torra would add more months of disqualification from holding public office.

Regarding the payment of the fine of 30,000 euros to which he was sentenced, the TJSC points out that Torra’s defense “does not yet have sufficient elements to present to the court any of the legal formulas provided for compliance.”