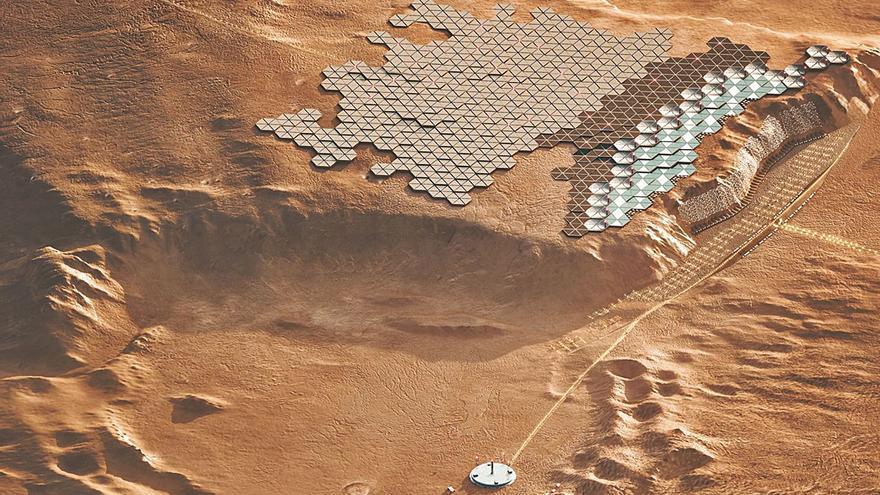 The year 2100. It has been 60 years since the first manned human missions left for Mars. The first city of the red planet, Nüwa, has been making its way between the rocks of the cliff of Tempe Mensa to become the first extraterrestrial colony of humanity. The records already speak of a million inhabitants. Most are immigrants from Earth. Many others, children of the red planet. Their lives could seem surprisingly normal. But hundreds of millions of miles from the blue bowling alley, civilization rises on radically different pillars.

Back in the year 2021, remembered in the future as the year after covid-19, Nüwa’s sketches are released, which began to take shape during the fateful months of confinement. Locked up in their homes, several researchers then began to imagine what the first human settlements outside of Earth would be like. “The next time we set foot in another world, we have to do it sustainably,” agreed members of the Sustainable Offworld Network (SONet).

Designing a city on Mars is not only a challenge for the imagination, it also challenges our gaze on Earth. “You have to think, on the one hand, about the physical concept of the city. And, on the other, in the needs of the people ”, explains Guillem Anglada-Escudé, one of the founders of the project and scientist at the Institute for Space Studies of Catalonia (IEEC-CSIC). “We are not thinking of planting a flag and that’s it. We propose a long-term sustainable development model ”, he adds.

The project is the following. The foundations of the Martian city of Nüwa, which takes its name from the Chinese goddess who created humanity, should be dug into the rock to protect the inhabitants from the extreme temperatures of the planet (where the average is -55 degrees), an atmosphere with hardly any oxygen and intense solar radiation. On the cliff face, the living quarters and offices would be built. And in the valley, the leisure areas sheltered under transparent domes. Thus, five urban centers of 200,000 inhabitants each would be built, until reaching one million Martians.

“On Mars we are going to need a cohesive and supportive society. Individualism does not work on such a hostile planet ”, reflects Miquel Sureda, founder of Nüwa and aerospace engineer from the Polytechnic University of Catalonia (UPC). The first manned missions to Mars, he predicts, will be made up of scientific and technical personnel who begin to prepare the settlement. “But over time, the colonies will also need doctors, teachers and artists,” he argues.

The human factor is, in fact, one of the main stumbling blocks facing space exploration today. Because the technology to go to Mars is more or less ready (or will be in the next few years). It remains to be seen if humans would physically and psychologically support life on another planet.

The future of Mars will also be built in schools. Martian children will not have subjects as such, but must learn to seek life. “Instead of focusing on encyclopedic knowledge, students will have to learn to use available resources to adapt quickly to innovations,” emphasizes Nüwa’s educational plan. Colleges, designed for youth and adults, will be a place to learn specific technical skills. How to design robots, program artificial intelligence algorithms, and build solar panels.

In Nüwa everything is thought out. Even the food. The Martian menu should include zero kilometer terrestrial fruit and vegetables grown on Mars. But also some delicatessens such as seaweed, insects and synthetic meat. “We have to think about a more efficient food system”, argues Gisela Detrell, who is the person in charge of Nüwa’s life support systems and a researcher at the Institute of Space Systems at the University of Stuttgart (Germany). So no agriculture, cattle ranching or extensive fishing in space. “It is an unsustainable model”, defends the scientist.

I have a letter for you