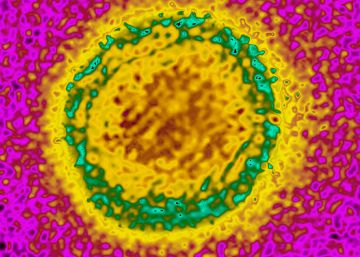 The Ramón y Cajal Hospital in Madrid has diagnosed in a young man who had not traveled to risk areas the first dengue case by sexual transmission registered in Spain. The contagion, which has been confirmed by the National Center for Microbiology of the Carlos III Health Institute, occurred in the middle of September and the sexual partner of the patient was another man who had recently traveled to Cuba and the Dominican Republic, countries where the disease is experiencing a significant rebound.

"The patient had symptoms compatible with dengue, such as high fever, skin erythema and intense pain," explains Santiago Moreno, head of the Infectious Diseases department of Ramón y Cajal. The clinical suspicion was confirmed in the laboratory and opened new questions about the origin of the infection. To the absence of trips to endemic areas was added the fact that the tiger mosquito does not live in the Community of Madrid –Aedes albopictus-, which does inhabit other areas of Spain, such as the Mediterranean coast, where it has acted as a vector in other native cases of dengue. The patient had not recently visited these areas. Dengue incubation period is usually between four and 10 days.

"We had to do a detailed research work," says Moreno. The Ramón y Cajal Tropical Medicine unit, in a team led by Francesca Norman, reached a person with whom the patient had had sexual relations and who "shortly before had also presented symptoms compatible with dengue after returning from travel, but that had not been diagnosed of dengue by health services, "adds Moreno.

The epidemiologist Susana Jiménez and the biologist Andrés Irisio, from Public Health, stress that "the importance of the case is that it is the first described" of disease transmission "in an area without mosquitoes that can act as vectors of the disease." "In any case, it is a rare route, so the risk to the population derived from this finding is considered low," added both experts.

Dengue is a disease caused by a virus that is usually transmitted through the bite of a mosquito and is endemic in several countries of AMerica, Southeast Asia and Africa. The clinical picture is characterized by a generalized malaise, high fever, headache and a rash on the face that extends through the neck, chest and extremities.

All cases detected in Spain until October 2018 had been imported, as the cases diagnosed in people who had acquired the disease abroad are called. A year ago, however, the first cases of autochthonous transmission of the virus by the tiger mosquito were diagnosed in three members of the same family in Murcia; then, two others in the same region; and finally, A sixth case in Catalonia. In all of them, the insect first bites an imported case and, after suffering an infection process in its organism, transmits the disease by biting another person.

Last September, a new indigenous case was detected in the Metropolitan Area of ​​Barcelona. That of Madrid would be the eighth indigenous contagion registered in Spain, although this time the route of infection has been different. France and Croatia have also recorded in Europe autochthonous episodes of the disease, all linked to the tiger mosquito.

Dengue virus has been detected in semen and vaginal flows of sick people, cases of sexual transmission are considered extremely rare and there are very few references to them in the scientific literature.