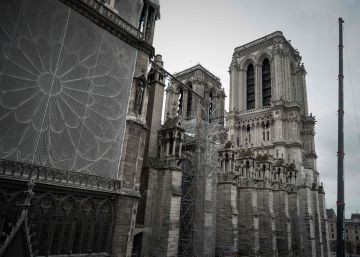 Six months after partial collapse of Notre Dame de Paris - the cathedral built between 1163 and 1345, one of the most visited monuments in Europe and a powerful cultural symbol of Europe and Christianity - there remain some unknowns. Details remain to be clarified: about the origin of the fire, its effects on health, the reconstruction schedule, the final cost, the architectural profile of the future building and the risks that still exist for its stability.

THE ORIGIN. The first unknown, which Justice is investigating, is the cause of fire April 15, 2019. The misinterpretation, by the security officer on duty, of a first alarm at 6:23 p.m., delayed the location of fire and the arrival of firefighters by half an hour, as revealed in May Le monde Y Le Canard Enchaîné. It has not been specified where and how the fire began. Excluding the criminal trail, investigators focus on three possibilities, he explains Le figaro: a badly extinguished cigarette, a short circuit in the elevator that led to the needle or a short circuit in the cables to operate the bells.

THE LEAD. When the needle and the roof of Notre Dame collapsed, toxic particles dispersed over a wide area in Paris. The cathedral contained 500 tons of lead that melted. The "unprecedented health crisis", as described by the local newspaper Le parisien, led to the closure of the works between July 25 and August 19 in order to decontaminate the site and strengthen safety measures for workers. Some schools were temporarily closed. Of the 877 lead tests carried out since April on minors - the population most at risk with pregnant women - 89.7% are below the so-called surveillance level, 8.9% at a level that requires surveillance, and 1.4% with a high level that requires monitoring. The excessive presence of lead in the blood of the latter can be explained by other reasons than lead from Notre Dame and, in any case, is in line with the same levels as in the general population, according to the authorities.

THE CALENDAR. Five years. This was the deadline for reconstruction that French President Emmanuel Macron set in the hours after the Notre Dame fire. The date would allow the cathedral to be ready for the Summer Olympics to be held in 2024 in Paris. However, the restoration of the temple is not expected to begin until 2021. Today it is still in the stabilization phase to prevent collapse. Once this phase is finished, in March or April, a second evaluation will be opened that will finally allow reconstruction.

THE NEEDLE. The fall of the burning needle of Notre Dame, built in the middle of the 19th century by Eugène Viollet-le-Duc, has remained the iconic image of the fire. Therefore, it will be decisive for the future image of Notre Dame how to rebuild. A more or less faithful imitation of the original, which was already an addition to the Gothic cathedral? Or a "modern architectural gesture," as Macron suggested at the time? The debate promises to be one of those artistic battles that Paris is so passionate about. The architectural competition suggested by the French Government after the fire has not materialized. The rector of the cathedral, Monsignor Patrick Chauvet, warned on Tuesday that "much humility is needed." "We can't disfigure the cathedral," he said. "We enroll in a tradition."

THE MONEY. The avalanche of money in the hours and days after the fire sparked a debate about the ends of philanthropy. Donors include some of the great names of French capitalism such as the Arnault and the Pinault. Wouldn't it be better to allocate a part to other causes? "You already know that I am in favor of redistributive policies and that I am a social democrat who believes that we live in a country and in a Europe where there is not enough social justice," he said. to THE COUNTRY two days after the fire Anne Hidalgo, the mayor of Paris. "But I find it important that the people who have more means, the great fortunes of France and the world, decide to contribute their means." The promised money amounts to 922 million euros, of which 104 have already been made effective, as explained in a press conference by the Minister of Culture, Franck Riester. The budget for the stabilization phase is 85 million euros, reports France Presse.

THE RISK. One of the challenges at the current stage is that a new collapse occurs. “The big moment will be the construction of a scaffold above the current scaffolding to be able to trim it, ”Chauvet explained. The verb trim is not free. In Notre Dame, which was in full restoration, there was a scaffold at the time of the fire. This caused the bars to be welded, so it cannot now be mechanically disassembled. You have to trim them. The operation is very delicate. “If the scaffolding fell on the cathedral, the three vaults that are standing would not hold. There are several tons above the cathedral. The urgent thing is to remove this scaffold and then you can say that the cathedral is safe. A storm like last Monday is enough so that we immediately monitor that the scaffolding does not fall. There is always a risk ”