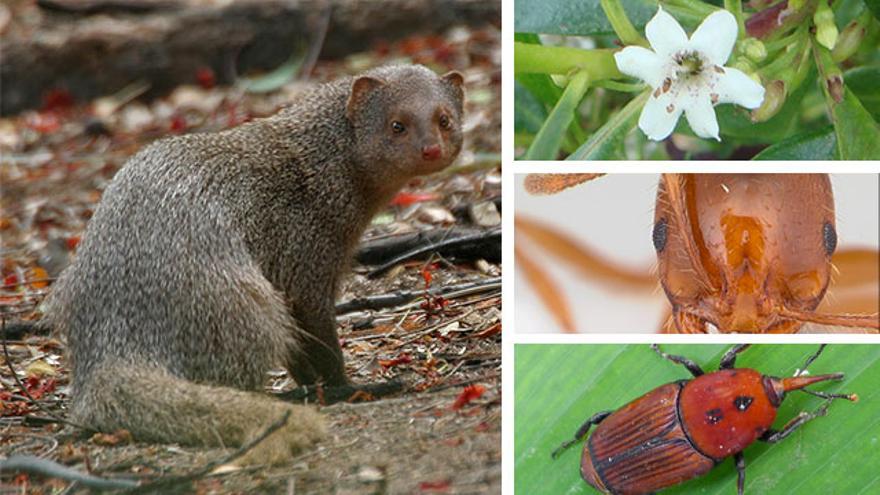 The poisonous red fire ant, a fish that breathes out of water and lives in dry mud, or mongooses are going to be declared invasive species in Spain. The expansion of exotic varieties that are harmful to ecosystems is a continuously growing phenomenon.

It is usually enough to open the door a little for them to spread and deteriorate the ecosystems where they thrive. The Government plans to expand the list of invasive varieties with three types of ants, the fish Paramisgurnus dabryanus, the red weevil that devours palm trees, the myopore (a tree from the antipodes) and the entire mongoose and meerkat family – not including the mongoose, a European mongoose.

To enter this list of invaders it is not essential that they are already expanding. Traded varieties have previously been cataloged whose escape would be like dropping a time bomb. Once their official invasive alien species status is approved, they are generally prohibited by law from possessing, transporting, and trading in them. Nothing to have meerkats as pets or sell them in stores. Nothing to transport them to supply the possible sale.

The red fire ant stings and is poisonous. It comes from South America and has colonized half the world. It has migrated north and, despite the fact that lower temperatures were expected to slow its path, a greater ability to adapt on the one hand and the global warming of the Earth on the other have made it it is detected in latitudes that were thought banned for the insect. A perfect summary of the cocktail that drives biological invasions.

In Spain, a case of a Solenopsis invicta sting was studied in 2006 in Malaga, which caused an episode of anaphylaxis. The insect was found to be on imported wood. It was the first case reported in Spain and illustrates the simple gateway through which biological invasions penetrate.

Alberto Tinaut, an expert in ants from the Spanish Association of Entomology, says that there is not much information that the Solenopsis invicta has settled in Spain, but, "sometimes, the catalogs drag lists from other countries."

Regarding the other two species that will join the catalog of invasive exotic species, the crazy ant and the pharaoh, Tinaut explains that the former has been installed on the southern Mediterranean coast for some time. "I disagree with calling it invasive because we have not observed any specific damage. It is foreign, of course, and has settled in Spain, but I do not see that character of damage." About the pharaoh, "at the moment it is detected sporadically when it arrives, for example, in fruit boxes from North Africa or the eastern Mediterranean."

All in all, invasive species experts insist that preventive measures – before they have spread – are more effective and cheaper than reaction once they are well installed. In fact, La Palma weevil beetle, which is in the draft order to declare it invasive at the national level, has already wreaked havoc in Spanish palm groves. It is one of the 10 invaders that have already caused the most economic damage in Spain.

Just a year and a half ago, the Consortium of the Natural Park of the Sierra de Collserola in Barcelona decided that it was going to empty the Vallvidriera reservoir. Out all the water until the muddy bottom dried up. In June 2020 the swamp was released. Once the bottom was hard, it was plowed.

The plan was to kill the Paramisgurnus dabryanus, an exotic fish that has colonized this body of water, a vital breeding ground for amphibians.

The Paramisgurnus dabryanus arrived in Vallvidriera, like so many other invasive fish, because someone dropped it there. It is the second case in Europe of colonization of this fish. It is a species used in private aquariums. Once in the waters, it has shown its great ability to colonize: can breathe oxygen from the air and lives in the mud at the bottom. It not only lives, but survives extreme conditions because, if the water disappears, it can go deeper into the mud as the top layers dry out. Hence the idea of ​​letting the reservoir dry up and then tilling it to prevent fish from staying there.

The Ministry has included it in its plan to expand the list of invasions. The Generalitat de Catalunya explains that this species has "effects on the structure of invertebrate communities and on the characteristics of the water" and poses "a potential risk of introducing parasites into native communities". It has been detected again after filling the reservoir.

Although invasions based on insects or muddy fish can visually capture more, the reality is that, at least in Spain, the exotic species that, in general, are causing the most headaches are vegetables. From the cat's tail to the dusters of the pampas.

Flora is not lacking in this government review: the myopore or pigeon pea colonizes the delicate dune ecosystems. It came from the antipodes (Australia and New Zealand) to decorate gardens and medians. Now it invades the coast. more than a decade ago, your file from the Ministry of the Environment Environment and Rural and Marine Environment described it as "an escape from the gardens" and pointed out: "It is increasingly present in the dune systems". She was already an invader in Catalonia, the Valencian Community, the Balearic and Canary Islands. The technicians warned of how difficult it is to eradicate it: "The work must be repeated for several years." They also pointed out that the best measure to avoid its invasion was to have "a dense and well-established dune vegetation". After that warning, there were not a few good years for the Spanish coastal dunes.