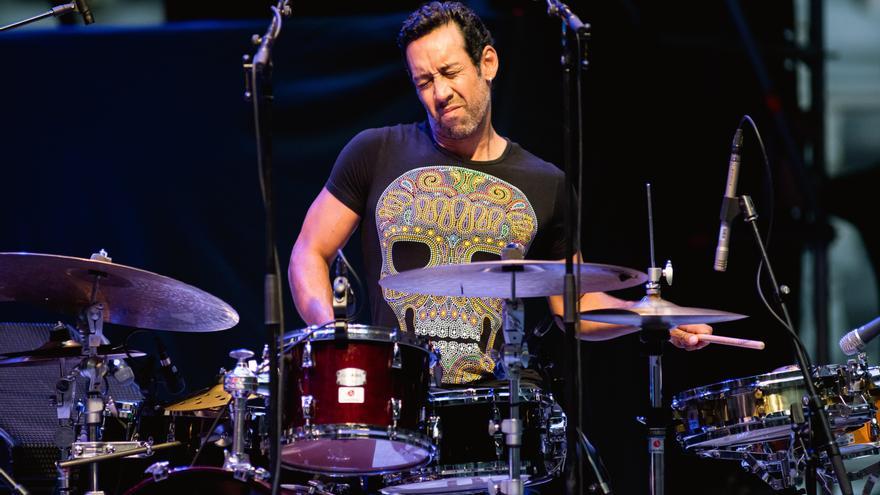 Vitoria, Jul 17 (EFE) .- Antonio Sánchez’s final roll has put a great finishing touch on the 44th edition of the exceptional Vitoria Jazz Festival that has shelved a special program, motivated by the pandemic, but that has brought sounds as varied as they are surprising of current jazz.

The virtuous Mexican drummer has squandered endless resources with his friends Donny McCaslin (tenor sax), Miguel Zenón (alto sax) and Scott Colley (double bass), who would also have given the bill luster if they had decided to be in Vitoria alone, but luckily for the stands they have all done it together.

Thus, each one has had their moment, but the good vibes that have emanated from the tables were not accidental. The knowledge that they have of each other has been felt in each subject because in one way or another they have all participated with the laureate Antonio Sánchez. “It is a musical promiscuity, we all play with everyone,” he said.

Without going any further, Scott Colley has put his double bass at the service of the winner of four Grammy awards on the album Symbiosis (2014). In addition, the entertaining conversation that the winds have maintained during various moments of the night has been spectacular, from the entry with “Northbound” to the end with “The Real McDaddy.”

What Donny McCaslin has done with his tenor sax is within the reach of very few artists and if to that is added a clean and pure sound, everything generates a perfection that an Iradier Arena has enjoyed, which on this day has presented the best edit entry.

“Every time we come to the Basque Country we feel at home,” said Antonio Sánchez, towel in hand to wipe the sweat from the effort made during the first part of a performance that has gone through different albums by the award-winning band’s author. sound of “Birdman”, by Alejandro González Iñárritu.

The end has been tremendous, a catharsis that has brought the biggest ovation of the festival, which has forced the protagonists who have left everything on stage to come out again.

The audience has been silenced before by the talents of the French Anne Paceo, who has filled the stage with her quartet completed by the voice of Isabel Sörling, the sax of Christophe Panzani and the keyboard of Tony Paeleman.

From his first songs he has already begun to make his intentions clear, but with “Toundra” and “Circles”, both from the album that bears the same name as the second song, released in 2015, he has impregnated the place with a peace that they usually leave. this type of melodies and that on several occasions has come from the throat of the popular Swedish vocalist Sörling, who has shown his jazz qualities in “Birth And Rebirth”, also from “Circles”, with his lyrical touches that have extended throughout the concert.

Christophe Panzani has unleashed his saxophone for several songs and has made it clear why he is so recognized in the French music scene as one of the most promising.

Everything has been watered by the sound of Anne Paceo’s drumsticks, who has made an effort to interact with the public in Spanish. “We can negotiate”, has indicated when the public has asked him not to go when announcing his last interpretation. “I learned Spanish at school, but I have forgotten,” he has recognized with difficulty.

The French drummer has set the rhythm with the beat of the pedal, snare and kick drum as well as putting the voice in “Myanmar Folk Song”, which she has said is one of her favorite countries. A subject with which he was going to conclude a very sentimental performance full of meaning and understanding. However, there is still time left for an encore (“Polar Night”) and to finish developing his fusion of jazz, lyrical and electronic touches, which has been approved with a note by the public with a closed ovation.

Although the Iradier Arena has lowered the curtain on its premiere in this 44th edition of the Vitoria Jazz Festival, which intends to return to Mendizorroza next year, the “bonus track” will be put on by the Maciej Obara Quartet at the Teatro Principal in the Basque capital with the alto sax of the Polish; the piano by Kit Downes, the double bass by Max Mucha and the drums by Michał Miśkiewicz.