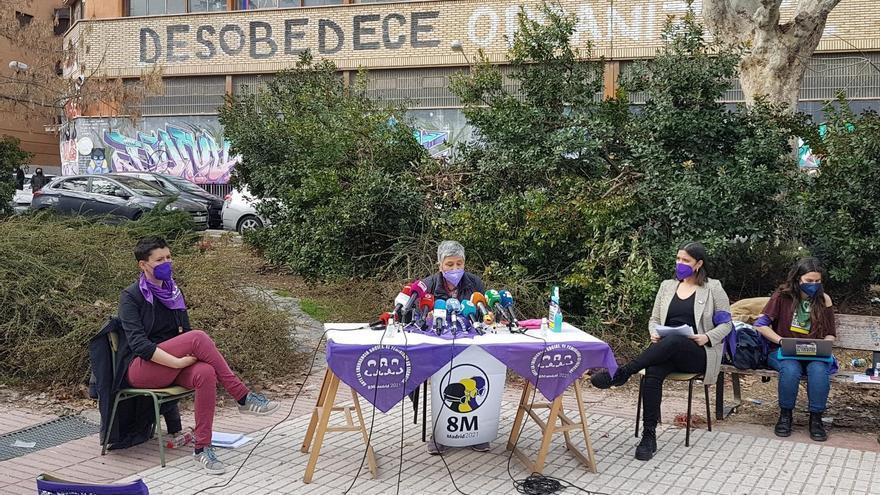 There will not be a massive demonstration like the one in previous years, but feminism wants to take to the streets this next March 8. The 8M Commission, in which assemblies and women participate individually, announced this Friday that its intention is to convene four concentrations in four different places in the capital: Puerta del Sol, Atocha, Cibeles and Ambassadors. The spokespersons of the commission have explained that they are currently in “continuous communication” with the Madrid Government Delegation, which is the one who must authorize the protests, but the forecast they manage is that they should not be more than 500 people, as advanced the delegate José Manuel Franco a few days ago.

The organizers have not detailed how they will control the capacity, but they will use “a security cordon” for this and are awaiting the “guidelines” of the Delegation to ensure attendance. What they have insisted on is that there will be “collective responsibility and all security measures will be assumed” in the face of COVID-19, which still keeps the country in a “high risk” situation. “We will have a security protocol so that all women who are going to attend know what guidelines they have to follow,” they pointed out.

The four seats chosen will represent a concrete demand in line with the “blocks” that the virtual assemblies that have been held in recent weeks have worked on: the Puerta del Sol will be aimed at care, public services and precariousness; in Cibeles there will be claims about sexist violence; in Ambassadors on anti-racism and diversity and, finally, Atocha will be dedicated to the climate emergency.

Along with this central convocation in the capital, rallies are also being organized in squares of other towns and neighborhoods of the community, in addition to actions in the days prior to the same day 8 because “we want to emphasize decentralization” so that “all we can go out on the street safely. ” The organizers have called to “avoid overcrowding” in an 8M that is “a challenge” and that “will be different”, but in which “no one can silence us in our democratic right to express ourselves and demonstrate.” “Feminists are going to make our voice and demands heard,” they added.

However, they are not the only protests that will take place because the mobilization will not be unitary. The confrontation between different sectors of feminism, among other things due to the Trans Law or prostitution, have led to two parallel calls: the Madrid Feminist Movement, formed mainly by organizations critical of the norm, has announced that it will concentrate the next Day 8 in Madrid’s Plaza de Callao, which will be fenced and where only 250 previously accredited women can be, respecting the security measures in force.

In recent days, International Women’s Day has once again been the focus of the debate after the Minister of Health, Carolina Darias, advised against demonstrations with a resounding “no place.” His statements were followed by a cascade of positions of parties and leaders in a public scrutiny that has not been seen with other calls that have also been held these previous months. For its part, the right has once again shaken the ghost of 8M as the culprit of the expansion of the pandemic of last March and qualifies as “recklessness” to authorize the protests in 2021, in the words of the PP spokesperson in Congress, Cuca Gamarra.

For the 8M Commission, however, occupying public space is, if possible, more necessary this year. The chosen motto is “in the face of social emergency, feminism is essential” and among its long list of demands they include sexist violence, the wage and pension gap, job insecurity, which falls more heavily on women, equalization of rights to domestic workers or to show that during the health crisis care “has fallen mainly on us, both in formal jobs, in health or cleaning, and in housework” or that “many women have been left behind in an irregular situation “. The crisis, they have settled, “falls back on the shoulders of women.”