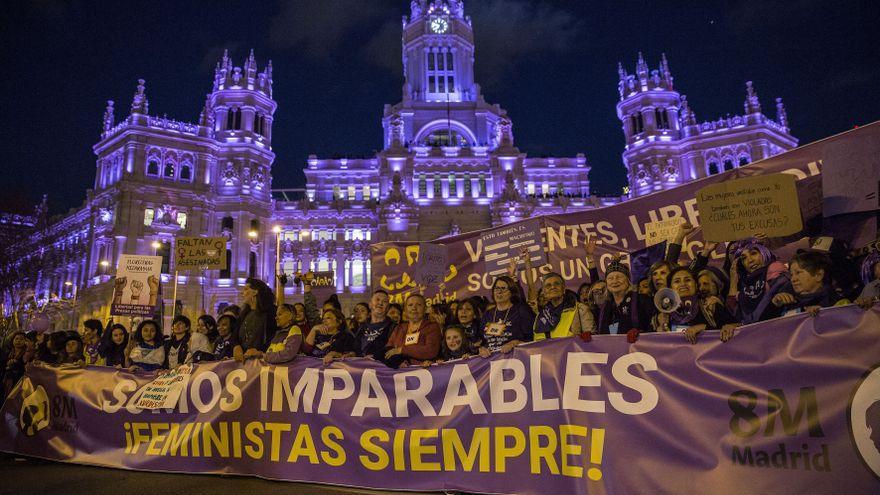 The Superior Court of Justice of Madrid will receive this Friday at least three appeals to the decision of the Delegation of the Government of Madrid of prohibit all the mobilizations that were called for next March 7 and 8. Both the two feminist platforms organizing the concentrations and the unions CCOO and UGT have decided to appeal to justice what they consider “an outrage” and a violation of the fundamental right to demonstrate. Madrid is the only community that has banned protests in the streets based on “public health reasons” due to the epidemiological situation of the coronavirus in the region.

The 8M Commission, organizer of the massive demonstrations in recent years and which planned to focus on four central squares in the capital on 8M, has announced that it will appeal the decision and use “all the legal tools” at its disposal in the face of what it considers a ban that “it is not produced for health reasons, but for political reasons.” For its part, the Madrid Feminist Movement, which brings together 350 groups and which had convened a rally in Callao with 150 attendees, has also chosen the same route because, in its opinion, the decision is “unconstitutional” and “arbitrary”: “It seems to us an unprecedented attack, typical of other times,” they said at a press conference.

“It is denied in an irregular manner” is the reason that the CCOO and UGT unions have stated, which will jointly present the appeal throughout this Friday and have criticized that it is about “demonizing and criminalizing” the feminist movement and they understand that the veto “violates fundamental rights”. The protest that the trade union centrals had called is the usual one held every year in front of the Palacio de Cibeles, in which a total of 100 people were to gather.

The Government Delegate, José Manuel Franco, this Thursday justified its resolution pointing to an “estimate” that all concentrations – 104, of which 70% corresponded to the occasion of International Women’s Day – would mobilize “more than 60,000 people”. This is not the first protest in public space that has been banned in recent months in Madrid, but the vast majority have been held. The First Vice President of the Government, Carmen Calvo, has endorsed this friday the decision of the socialist and has justified that the community is the one that always houses the “largest and most important” mobilizations, and where the worst coronavirus data are now also being recorded.

Call to go out into the public space

The feminist movement does not understand the reasons put forward by the delegation and points to the rest of the protests that have been held in recent months. The health situation, explained from the 8M Commission, which requests the resignation of the delegate, “cannot be an excuse to eliminate one by one all the legal alternatives offered” to the Administration to be able to go out on the 8M: “Decentralization, transform demonstrations into rallies, reduce hours and capacity … “, they add. This platform had convened rallies in the capital with a maximum of 500 people, a capacity “almost ridiculous if we compare it with the crowds in public transport or the concentration of people in shopping centers.”

The same is claimed by the Feminist Movement of Madrid, which has defended that the planned concentration “attended to all security measures” and has described as “shameful” that “while we see the bars full and the transports crowded, now the problem is women “.

Feminist organizations call for “popular support” and to go out into the public space and “use everything that is allowed: go out to consume, go out to produce, go out to care, go out to study, to dye Madrid purple”, says the Commission 8M. In addition, they announce that they will replicate the reading of their manifesto in all spaces on March 8 at 8:00 p.m. and that they maintain the calls that are legalized. In this way, they will gather this Friday afternoon before the CIE of Aluche and this Saturday demanding light for the Cañada and Vallecas with Domestic Territory.

The Feminist Movement of Madrid does not want to give up the 8M, despite the prohibitions, and that is why it has advanced without specifying anything more than “women are not going to stop having a presence, we will comply with the rules, but we will be listened to.”