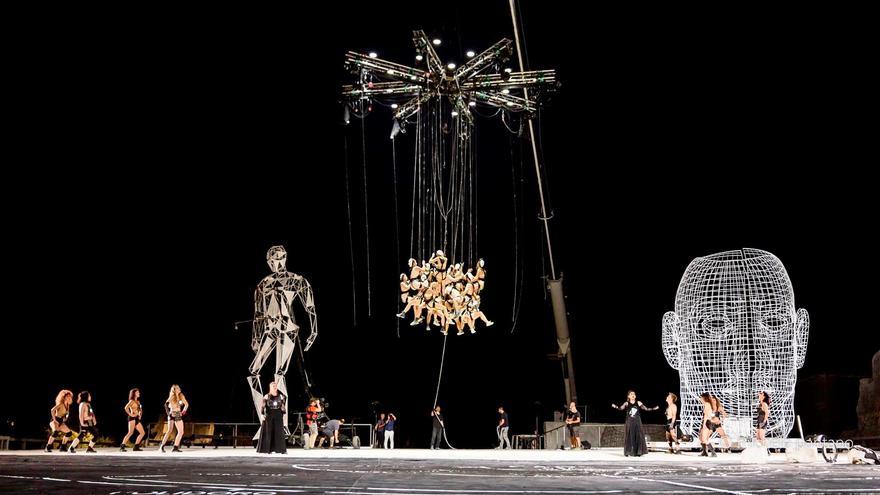 Syracuse (Italy), Jul 4 (EFE) .- Ancient tragedies always have a modern echo. And with that certainty, the director of La Fura Dels Baus, Carlus Padrissa, conquered the Greek Theater of Syracuse (south) today by adapting Euripides's "Las Bacchantes" to the current feminist struggle around the world.

Padrissa and his team, as he emphasized in a conversation with Efe, are part of the 56th season of classical performances of the Greek Theater, an archaeological jewel excavated in the rock that has resumed its functions under the stars after the pandemic.

And he does it with a risky adaptation of "Las Bacchantes", the tragedy that Euripides wrote twenty-five centuries ago about the worshipers of the god of wine, debauchery and delirium, Dionysus or Bacchus, but this time from a feminist perspective.

"The message is that we must let women take power and we let ourselves be carried away by them, because they are builders, they are creators of life who are not going to take their children to war," explains the director while sipping a tea. to the intense heat in a theater grotto, moments before debuting.

A GODDESS OF WINE

Euripides' work, released posthumously after leaving Greece and taking refuge in Macedonia in the middle of the Peloponnesian War, narrates the arrival of the god Dionysus in the city of Thebes and his struggle to demonstrate his divinity to the sacrilegious rulers of the place.

La Fura's bet revolutionized the stage, the stands and even the exterior of the theater, with dozens of women worshiping the god between drums and screams, emulating those bacchanalia in the Hellas forests in which drunkenness spread

On the other hand, the director has introduced a substantial change: The god is no longer such, but is a goddess, with A final.

In the traditional version of this Greek play, that role was awarded to an "effeminate" actor, as Euripides describes Dionysus as such, but Padrissa preferred to give it directly to a woman, the Italian actress Lucia Lavia.

A choice that has few precedents, including the Ingmar Bergman adaptation, which employed a "goddess."

THE MEXICAN PROTESTS AS A INITIAL IDEA

The director acknowledges that the idea came to him in the summer of 2019, when, while on vacation, he turned on the television and learned of the massive demonstrations of women in Mexico City to denounce a series of violations.

"The aesthetic that we have used is the one that existed in those protests," he explains.

In effect, the followers of the god become the executioner of the sovereign, carrying banners such as "If you violate our women, we will violate your laws" or "Baco we are all", also written in Spanish.

On the boards of the Sicilian Theater, the actors and dancers under Padrissa's orders become elements with their own meaning that constantly change, hanging from harnesses or lying on the ground, like a kind of ephemeral scenography.

All accompanied by overwhelming lighting effects and above all, sound effects, created by the director himself and whose mission is to cause unrest in the public.

They also use a 70-meter-high crane that allows the one known as "Deus ex machina", the way in which the ancients introduced the actors who played deities on stage, although with much more rudimentary mechanisms.

At the end of the "serata", the god, or rather, the goddess, confirmed his triumph by rising above the heads of an audience that did not hesitate to stand up to dedicate a standing ovation to the work.

THE SEASON OF SYRACUSE

The National Institute of Ancient Drama (INDA), which manages the Greek theater, has already announced its programming for the next biennium, as it returns with enthusiasm after the health crisis.

This summer he began with the last two tragedies of the Orestes trilogy, "Las coéforas" and "Las eumenides", directed by Davide Livermore, and will continue with these "Bacchantes" by La Fura and with "Las estrellas", the comedy by Aristophanes.

The proposal of the Spanish company can be enjoyed over twenty-three nights between this Sunday and next August 20.

The Greek theater of Syracuse, a UNESCO World Heritage Site, represents the greatest example of theatrical architecture of the Hellenic West, as this city in the center of the "Mare Nostrum" was founded by Greek settlers from Corinth in 734 BC.

Almost entirely excavated in the rock, it was used for theatrical works but also as a parliament, for popular assemblies in the city.

Adapted for circus shows in Roman times, it fell into disrepair and even in the 16th century it was used as a quarry for the fortifications that still crown the city. The excavations for its recovery began at the end of the seventeenth century and would not finish until well into the last century.

But, in any case, more than two millennia later and despite the vicissitudes of history, the theater continues to serve for what it was intended, to represent those works that delved into human morality to portray our deepest contradictions.