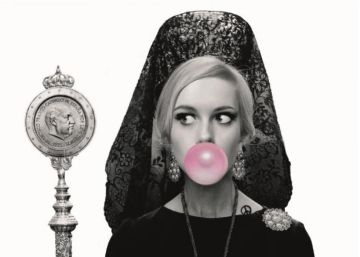 A magazine of the Transition, then reviews the struggle for women's rights from the decline of the dictatorship to recent dates. At a light pace, with a humorous tone that does not detract from the matter, Ruth Sánchez and Jessica Belda recall the pro-amnesty manifestations, the conquest of the right to use contraceptives and abortion where appropriate, the decriminalization of adultery and the “specific crimes of the feminine sex ”... It should be remembered that during the Franco regime, the woman was subject to certain restrictions today typical of regimes such as that of Saudi Arabia.

Figures such as the communist deputy Dolors Calvet (author of an accurate parliamentary speech in defense of the distillation of crimes such as the spread of birth control pills) are parading through the stage of the pleasant Margarita Xirgu room of the Spanish Theater in Madrid; one of the 300,000 women whose children were robbed by doctors like gynecologist Eduardo Vela and nuns like Sr. María Gómez Valbuena; Carmen Polo de Franco, who invokes his financial freedom - understand the irony - when a couple of civil guards, whom he calls fascists, tries to prevent him from breaking the law ...

At the beginning, the function threatens to be routed, but soon finds the right tone. The thesis of the authors comes to say that although in 1975 Franco died, his inheritance continues to provide good returns. Yes The Section (Women in Spanish fascism), The first piece of the trilogy that Sánchez and Belda are up to, pivoted around the accused personalities of Pilar Primo de Rivera, Mercedes Sanz-Bachiller and Carmen Polo, oppressed incarnate by Belda herself, Manuela Rodríguez and Natalie Pinot, Spanish, Franco is dead It is a more open and scattered show, which is soon becoming limited. A bunch of well-chosen and intoned songs has just framed it in the genre revisteril.

In this context, the girl protagonist of The days of the week (Miliki song performed in a projection by Fofó: "So ironed, like this, like this ...") prefigures the evil adult wife of the Oi Pello Pello, Sharp oral tradition romance popularized by Mikel Laboa. Listening to this behind it shows the bipolar nature of the sentimental education we have received. The Let me live with joy, from Vainica Doble, she is asking that her singers come a little higher, which they do when they shear Let the tortilla turn with joy, outstanding reason and the shadow of Chicho Sánchez Ferlosio dancing with them.

Perhaps the discourse where actress Manuela Rodríguez vehemently exposes the opposition between women and small children of inaccuracy: rather than in ideological or generic terms, violence must be understood as a character trait (following the idea of ​​Wilhelm Reich) that can also appear in the female gender when in a position of power. The interpretations that Natalie Pinot, Belda and Rodríguez make of an extensive gallery of characters, eloquent, precise and energetic, have sparkle and charm. All three are on demand outstanding soloists, effective choreists and catalyze and bring the function to fruition.

What the staging of Verónica Forqué proposes is not always perfectly agreed with what the text says. This is evident during the final scene, in which, while the screen sheds the names of hundreds of women murdered by their husbands, boyfriends and ex-partners as fine rain, Belda begins to shed her clothes with her back to the public. Nothing can be objected to the actress (it should be praised, in any case), but her nude definitely distracts from the names of the victims. I understand that the idea is to oppose beauty to horror, but it is naive and timeless to do so in this context. In addition, its use as a culmination of a theater set is already worn out. Making the stage a circus track is also a topic that has been serving the most diverse montages. The public forced the actresses to go out six times to collect their applause, which is quite rare in the current theater.