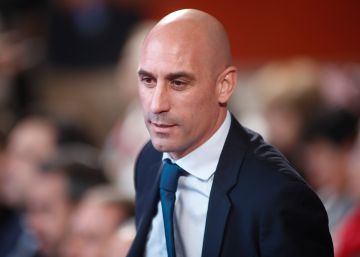 Another twist. The labor conflict opened in the Women's Soccer League for the negotiation of the collective agreement on Wednesday experienced an unexpected turn. The ball had fallen on the roof of the Spanish Federation and the response of its president, Luis Rubiales, caught many with his foot changed. In a meeting broadcast on streaming that staged the differences between the parties, with the players of the selection in the room questioning the employer, Rubiales proposed that his institution contribute the necessary money so that the clubs can accept the demands of the soccer players and thus avoid the indefinite strike called from November 16.

The Federation estimated that amount at 1,152,000 euros, although the lawyer of the majority union, the Association of Spanish Footballers (AFE), María José López, raised it to 1.7 million. In its offer, Rubiales detailed three conditions to make it effective: that each team has a minimum of 18 professional licenses; that the commercial rights of the competition return to the Federation; and, perhaps the most important point, that the parties are broadcast by the television operator who has hired the local club. This has been a battle point until now because, for example this season, Mediapro went to court so that Barça TV did not give Barcelona-Atlético, since the producer has the rights of the mattress set. "I could not understand that our proposal is rejected," Rubiales settled.

The meeting had generated great expectation and all eyes had fallen on the Federation after the agreement reached on Monday by the Association of Clubs and Mediapro, in which they proposed an exit to the crisis that depended in any case on the last word of Rubiales. In that agreement, the producer released without any penalty of the contract she had signed with the 12 clubs so that they could transfer their rights of retransmission to the Federation, which offers their four teams (Barcelona, ​​Heel, Athletic and Seville) 500,000 euros, more than double that of Mediapro (its average contribution does not reach 190,000). That difference, according to the employer, would give the clubs the financial cushion sufficient to meet the demands of the players.

However, the Federation sees the condition set so that this route bears fruitless: that the Gol chain broadcast two weekly meetings. Rubiales understands that he cannot accept that point when it comes to negotiating the whole package because, as he pointed out this Wednesday at the meeting, not all teams have the same value. “It is not logical that now you want to come with us (in reference to the employer's office). We are not going to sit with Mediapro. Now what you have to do is get out of this trouble and that the players have what they ask for. When the contracts are over (they are three years old), if you want to come, we see it, ”said Rubiales.

The meeting, held in the City of Soccer of Las Rozas and broadcast in open, showed the distance between parts; especially of the players of the selection with the employer. In Ecuador, one of the team's referents, Marta Corredera, picked up the microphone and addressed the president of the Club Association, Rubén Alcaine, present there. “Let's not make excuses to others, let's see what you are doing to solve this. It is not a comfortable situation for us either (in reference to unemployment). We're going to stop pointing at anyone, ”he said getting up from his seat. The intervention found the applause of his companions, topped with a "congratulations, chapeau”, Of Rubiales. A few minutes later, scorer Jenni Hermoso added: "We're already a little tired." Alcaine tried to avoid melee and He recalled that the entities had always opted for women's football. In conclusion, he declined to make statements and addressed a conclave with his team to analyze the new scenario. This Thursday, new meeting of the parties with the Ministry of Labor and the CSD.

Transfers Real Madrid: More than 400 million in sub 21 in the last 10 years

The Santander League: Do you want to meet Fernando Hierro in person?